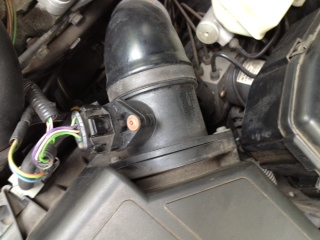 MVS Forums member jpr0204 demonstrates how to change a mass airflow sensor (MAF) on a 2000 V70 XC: “Just wanted to take a moment and post a MAF sensor replacement tutorial with some pictures to help others that may be in need of repair for this VERY COMMON failure part that often results in a one or more trouble codes and poor drivability. I’ve laid out the tutorial so easily that my 4-year old daughter now knows how to do it.”

Let start by locating the hood release lever inside the car. It is the red handle under the driver side of the dash. Then, you want to find the secondary hood latch under the hood and pull it toward you to open the hood.

Now for some of you, you will see your complete engine compartment for the first time. (LOL.) While standing in front of the car looking at the engine, to your right you will see your air cleaner box. Right behind the lid located in the intake hose you will see a cylindrical type sensor with a clamp on it and one connector. This is the MAF sensor.

Next we want to push down on the locking tab to release the connector and pull it away from the sensor. At this time we also want to remove the the small vacuum port with the lines going to it that connect to the air cleaner lid as well, simply pull the clip back and lift the vacuum port off the lid and set it aside. The final step is to loosen the metal band clamp right behind the MAF sensor with a flathead screwdriver. After removing the connector from the MAF sensor, go back to your air clean lid it is the large shaped lid to the front of the MAF sensor. Release all the clips around the air cleaner lid by just pulling them away from the lid itself. I believe there are 7 clips in total.