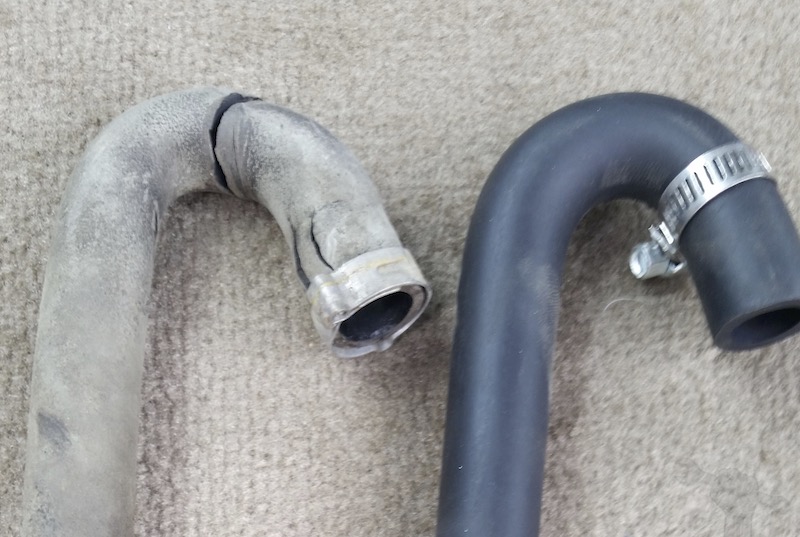 MVS Contributor Eric aka deepsouth posts a DIY tutorial on replacing the evap J-hose on a 2001 XC-70, including photos:

“Recently changed the evap J-Hose on a 2001 Volvo XC70 AWD. I’ve changed evap hoses on all forms of S/V70’s and 850’s but this was a new form of hell. The charcoal canister is above the rear suspension and fuel tank and is completely inaccessible from below. In fact, most shops–including the dealer–state that the rear suspension has to be removed and the job bills out at well over a grand.

Undeterred, I set about accessing the hose from the top by cutting through the rear of the wagon with a Dremel tool. I was able–after many setbacks and much frustration–to access the hose and replace it. I riveted sheet metal over my cut, painted it with bed-liner coating and RTV’d the seams. All told the job took around five hours and saved countless dollars. For what it’s worth, I did post in the 2001 XC70 forum asking for advice regarding this job but no takers–perhaps because many folks would rather live with the DTC than undertake this beast of a job.

Final thoughts? This is a real PITA and it’s incomprehensible how much more difficult the 2001 XC70 canister is to access than all prior year models. I still maintain that accessing it from the top is easier than from the bottom and can’t even imagine dropping the rear suspension to complete a 10 minute hose swap. All told I spent about $25 bucks on parts (sheet metal, rivets, RTV, and hose) and it took about three or four hours–most of which was spent using Dremel tool to cut access points and cutting sheet metal to repair.

I also made the maddening mistake of disconnecting the rear seat airbag before disconnecting the battery, thus triggering the SRS light that–from what I understand–must be taken to Volvo to reset. It’s surprising to me that astonishing lack of information on swapping this hose as it’s so much different and more difficult than all prior years. I hope this write-up helps folks in a similar position.”