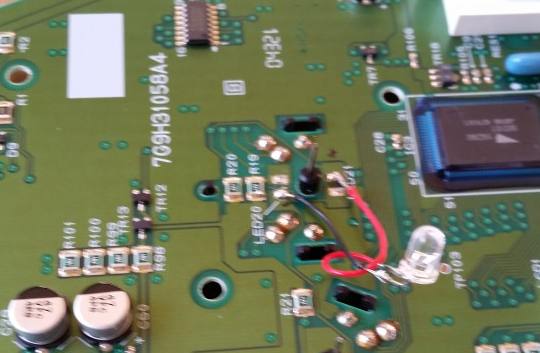 MVS Forums member bwk97volvos4005 shows us how to fix burnt out speedometer LED bulbs on his Volvo S40 with photos and tips!

My 2005 S40 speedometer LEDs quit working. These are little LEDs that are soldered directly to the board that controls all gauges. There are several posts on how to get the gauge cluster out. Once you do that you can take the whole module apart (with just a phillips screw driver) to get to the LEDs. You can un-solder the little rectangular LEDs that are bad and replace it with an LED out of a flashlight (I used red and it looks great!). See the pic below on how the LED solders in place… you will need some wire to get it out of the way so the gauge can fit back together. Do it like the pic shows and you will spend a couple hours and less than $10 on parts instead of over $1000 to replace the entire set of gauges.

And you only really need one LED like shown in the pic. It is plenty to light the spedo and the fuel guage.

I thought so too! In fact I was expecting bulbs when I pulled the gauges. I have no idea why some (2 of the LEDs out of 6 on the board) quit. I was thinking they weren’t getting power but that wasn’t it. Strange for sure. Of course had it been any of them other than the spedo I wouldn’t have messed with it.

I had a blown LED too. Unfortunately, it was the SRS fault light. Before I knew what had happened, I took it to the dealer. He said that incorrect battery jumping could send a voltage spike that would blow the DIM. I took the DIM apart, and the LED had vaporised. Replacing the LED was all it needed.