Volvo is quickly becoming one of, if not the, auto manufacturer pushing the entire car industry into the future. First, their 2009 announcement that, starting in 2015, they would focus exclusively on efficient, turboed 4 cylinder engines (or smaller) across their entire fleet.

Then, in summer 2017, they announced their plan to make every car in their lineup a hybrid or fully electric by 2019 – the biggest step towards electrification any major auto manufacturer has made thus far.

Now, with Care by Volvo, they’re changing the industry once more, announcing the first nationwide subscription car service. For many of us, this probably means saying goodbye to car ownership entirely.

What is Care by Volvo?

At the November 2017 Los Angeles Auto Show, Volvo unveiled their new Care by Volvo service, the first nationwide car subscription program. While other manufacturers offering subscription services – namely Porsche, Ford, and Cadillac – have opted for a slow introduction in limited markets, Volvo is going all-in with this potentially game-changing offering.

The new program is a subscription service designed to simplify car ownership and make the entire process easier. Volvo saw a customer need for an ownership model that was as hands-off as possible. Says Volvo CEO Håkan Samuelsson:

We think this will be bought by a lot of people because it’s hassle-free and transparent. It’s no longer important to own, but it is important to have a hassle-free experience. It’s a hassle to negotiate and think you know the actual price of the car, but there’s something you forgot—winter tires, insurance, the down payment. This is already negotiated.

Taking one step further than the typical vehicle lease, Care by Volvo includes everything you need for your car besides gas, from insurance, to roadside assistance, to maintenance and repair. They’ll even change out your windshield wipers! Everything is included for a single monthly fee.

Taking one step further than the typical vehicle lease, Care by Volvo includes everything you need for your car besides gas, from insurance, to roadside assistance, to maintenance and repair.

The subscription lasts 24 months and includes 15,000 miles a year. Just like mobile phone leasing programs, after 12 months subscribers can opt to change out their model and renew for another 2 years.

While the program probably won’t immediately change how we all purchase our vehicles, with the auto industry adopting new technologies at rapid fire pace, Care by Volvo is likely a precursor to what car ownership will look like in the future.

How Much Does It Cost and What Do You Get?

Subscribers are insured through Volvo by Liberty Mutual with a policy that covers $250,000 protection for bodily injury for each passenger in the car, as well as $500,000 per accident, with a $500 deductible.

At $600/month for 2 years, you’ll end up spending $14,400 for the 2 year minimum. Of course, you could just buy the XC40 outright, which will cost you $35,200 for the Momentum package. So while the subscription service is quite obviously much more expensive than just purchasing the vehicle, don’t forget that it already includes all the additional expenses mentioned above.

For many of us, this subscription service will be out of our financial reach or desire. But for those of us who enjoy leasing vehicles and trading up for newer models fairly regularly, or those living in urban areas with high monthly insurance premiums, Care by Volvo might be worthwhile.

What Models Are Available Under Care by Volvo?

As of 2018, Volvo will only offer Care by Volvo with the 2019 XC40 (which, as mentioned, will be available in spring 2018). Volvo plans to offer more models under the program in the future, but has yet to release any details.

On a related note, in July 2017 Volvo announced they were manufacturing 5 new electric/hybrid vehicles, with three branded directly under their Polestar performance marque. The first model, a 600HP hybrid named the Polestar 1 (P1), will only be available via an online subscription service.

The first model, a 600HP hybrid named the Polestar 1 (P1), will only be available via an online subscription service.

Yes, you read that right. Unlike the Volvo XC40, you can’t even purchase the Polestar 1 – even if you wanted to!

Similar to Care by Volvo, the subscription lasts 2 to 3 years, but you can switch out vehicles if your family’s in town for the weekend (for an additional fee).

As of January 2018, Polestar hasn’t released prices yet, though they did mention that, if they do ever decide to sell the Polestar 1 directly to customers, they’d likely charge between $150k and $177k, so we can assume the monthly subscription will be significantly higher than Care by Volvo – likely more in line with Porsche Passport or Book by Cadillac discussed below.

How Does Care by Volvo Compare to Rivals?

Only a pilot program for now, Porsche introduced its subscription service in October 2017 in Atlanta, GA. Like the Volvo program, Porsche launched Passport to meet the needs of its customers. However, Porsche customers apparently have very different needs than Volvo owners. Instead of a single car for one to two years, Passport allows customers to try out all of Porsche’s sports cars, with subscribers able to swap daily among 8 to 22 different models (depending on your program level).

Like Care by Volvo, Passport provides auto insurance for subscribers, with $1 million liability coverage and a $1,000 deductible. Cars are by picked up and dropped off by ‘valets’ and detailed between each ‘rental’ period.

No one can argue that being able to switch between a different Porsche sports car every day would be quite fun, but with a $2,000/month base price tag – more than 3x as much as Care by Volvo – you’re paying for that privilege! Obviously, Porsche’s typical customer has different ‘needs’ than customers of other manufacturers.

Porsche’s program is powered by Clutch Technologies, which builds the technological infrastructure for car subscription services. As of January 2018, Clutch partners with 8 different subscription services across the US. Most Clutch programs, except Porsche Passport obviously, allow subscribers to switch between cars from different manufacturers. Take Drive Flow, the North Carolina program, which allows drivers to switch among Audis, BMWs, Jaguars, Volkswagens, Land Rovers, Acuras, and Chevy trucks for $800/month – not much more than Care by Volvo!

Cadillac introduced their Book by Cadillac subscription service in New York City in January 2017, making them the first manufacturer in the US to offer such a program. In November the same year, they deemed the service successful enough to expand, focusing in on Los Angeles and Dallas.

The Book by Cadillac service is much more similar to Porsche Passport than Care by Volvo. The monthly fee of $1,800 is close to Porsche’s $2k/month and subscribers can change out vehicles at any time, with Cadillac delivering the vehicle to your home or work (though, unlike Porsche, Cadillac caps your switches to 18 per 12 months).

Like Care by Volvo, Cadillac’s program includes insurance and maintenance, but with the availability to switch out vehicles at any time, also includes vehicle delivery.

With Cadillac being a luxury car manufacturer, on the upper end of the market like Porsche, their focus doesn’t seem to be simplification of car ownership like Volvo, but rather creating a more dynamic and fun car experience

With Cadillac being a luxury car manufacturer, on the upper end of the market like Porsche, their focus doesn’t seem to be simplification of car ownership like Volvo, but rather creating a more dynamic and fun car experience. Want to try out Cadillac’s newest tire burner? Just order it. How about their Escalade? Go for it! It’s a different business model than Volvo’s and is directed towards a different lifestyle.

Ford purchased the San Francisco-based car subscription service Canvas in 2016. In November 2017, they expanded the program to the Los Angeles area.

Canvas is much more similar to Care by Volvo than the other two programs. Canvas doesn’t allow its subscribers to switch willy-nilly between models everyday. Subscriptions are month-to-month and include registration, insurance, roadside assistance, and maintenance. Unlike Volvo’s service though, all vehicles are used – which makes sense as it’s a month-to-month service.

Out of all the subscription services available, Canvas is certainly the cheapest – depending on the model you choose. Subscriptions start at just $405/month for the Ford Focus with 500 miles/month. You’ll need to tack on an extra $60/month for unlimited miles.

Prices go all the way up to $660/month for the Ford Edge Sport. That’s already more expensive than subscribing to an XC40 Momentum, but when you add on an additional $70/month for 15k miles/year (equal to Care by Volvo), you’re paying $20/month more than the premium XC40 R-Design!

Want all the above info in a handy graph? We’ve got you covered. Data is current as of January 2018.

Of course, buying an XC40 outright is always going to be cheaper than leasing or subscribing, but with so many perks attached that make the ownership process that much easier, it’ll likely pull in those non-motorheads who don’t mind spending extra cash for an easy, painless way to have a brand new, perfectly-working car year in and year out. 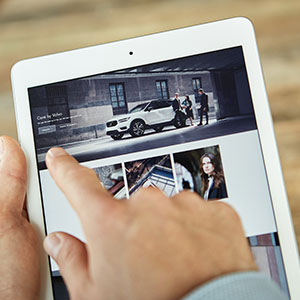 Article Name
Volvo Ushers in a New Form of Car ‘Ownership’ with Care by Volvo
Description
Volvo is changing the industry once more, announcing the first nationwide subscription car service. For many of us, this probably means saying goodbye to car ownership entirely.
Ryan
Publisher Name
MatthewsVolvoSite
Publisher Logo

The approach Care by Volvo takes makes a ton of sense in my opinion. I work in a service department at a non-Volvo dealership and more and more it seems many younger customers with money just want a single, simple, all-in-one solution to buying and maintaining their car.
Good move by Volvo overall.
That said, one problem with maintenance warranty type solutions can be low pay to technicians to perform the maintenance. I hope Volvo is smart enough not to do that with this program. I wouldn’t want the guy changing my oil getting paid less than he’s used to. It’s a recipe for shortcuts to be taken.