If I had taken a video of this, it would have been a seven hour video of cursing… (And three hours driving around town to all the Pepboys, Advance Auto Parts, and Autozone’s in Queens looking for a suitable Dorman radiator petcock replacement!)

I was finally able to remove the broken shards of this by drilling a hole through it, than trying to use a screw extractor (which of course didn’t work). And then drilling more holes into it and trying to turn it with a flat head, then a phillips, than a flat head… Ultimately, I was able to break it using various picks. I didn’t–luckily!–ruin any threads. After clearing all the little black petcock bits from the radiator, I swapped my upper and lower radiator hoses for some fancy new ones from FCP. All good.

But then I go to screw this in… And it doesn’t fit! The OEM petcock is like an M14, no? 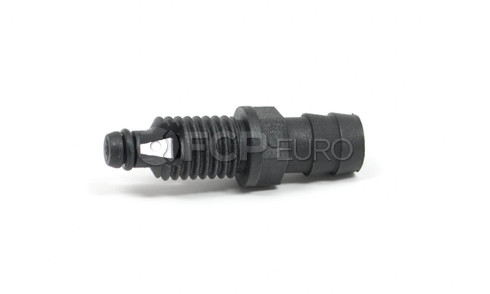 Well, no no one had it! Luckily, my Nissan has had a broken thermostat for the past two years and I’ve finally decided to replace it (the temp needle dances like crazy when you drive the car). I purchased new hoses, thermostat, and engine temp sensor so I don’t run into any problems. As I’m filling out my Rockauto order, I see this part, and I say to myself, eh, I’ll order one just in case… It ended up fitting my aftermarket Volvo S70 radiator!!! An M10, 1.5 would’ve been better. I put five miles into the car, no leaks. Whew.

One question though, didn’t get around to the heater core swap. I had forgotten my Dremel and bought the wrong size hose clamps for the job. I opened up my cabin and saw this heater core. This is not OEM, correct? Rockauto sells an ALLPRO heater core with a black plastic bottom  for $29.79. (So you know it’s gotta be good… sigh…)

Also, my heater core hoses do not say Volvo on them anywhere… I’m thinking they’re probably URO right? Man, they feel so wimpy compared to every other hose on the car… I have to replace this one day. But my wife wanted her car back already… I’ll keep an eye on the heater core.