What OBDII Scanner Should I Get?

What OBDII Scanner Should I Get?

I been looking on E-bay at this one that I attached, it's not as good as the one I use to have at work but it looks okay.

I've been looking at this model for a while cause it was more in my price range but now that I'm bringing in more flow I think I could spend more on something better. Any suggestions for something up to maybe a 100.00 or less if it's good, this OBDII is mostly for self but sometimes I do side jobs for people. Appreciate any opinions, thanks.
Last edited by matthew1 on Wed Oct 02, 2019 3:54 pm, edited 5 times in total.
Reason: Updated link
If U Wanna Play U Gotta Pay!!
Top

I have a Actron CP9410 PocketScan, just a basic code reader and nothing else fancy.

That eBay one is only $30 through amazon.

Copied and pasted from another post I wrote back in June, when it was $39.95. The link directly below has my Amazon affiliate ID embedded into it, so I'll get a % of that sale if you buy through them (plus a % of anything else on your order).

Disclosure: I get a small percentage of your purchase if you use that link to buy the scan tool.

I've had it since April, and I love it. It has a clear, simple readout I can see in daylight or no light because it's back-lit. It runs off the ODB port, so no batteries are required. It's small and light, and it works on my '97 850 as well as my 2004 V70 R. And yes, it turns off the Check Engine light in both cars. In other words, it clears codes.

It's got only two buttons so it's idiot proof.
Help keep MVS on the web -> click sponsors' links here on MVS when you buy from them.
Also -> Amazon link. Click that when you go to buy something on Amazon and MVS gets a kickback.

I bought this one last night, using the amazon link, for $126 shipped. 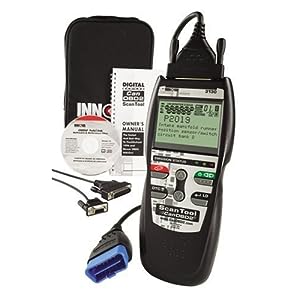 [Note:Updated this link with the successor Innova to Matty's scanner. -- Matt]

Overkill for most, but I need something that records, my Grand Cherokee has been acting goofy, but not throwing any lights. I need to see what's going on the second it does it. With this, I can drive around with it running.

Those Autel scanners are a steal. The Harbor Freight scanners are rebadged Autels, and sell for double.
Last edited by matthew1 on Wed Oct 02, 2019 4:02 pm, edited 1 time in total.
Reason: Updated link

I just bought that Autel MaxiScan MS300 off of Amazon. Unfortunately it doesn't seem to work at all. It always returns "LINK ERROR" and is unable to connect. I tried with the key in postion 0, I, and II all with the same result. Even tried with the car running. Maybe the MS300 just doesn't like my model year (2005 XC70)? Or is there some trick other than plugging it in and pushing the button?
Top

I like the Rica PPC and the Actron CP9185. The actron is not as specific but is my carry along in the truck and does graphing so I can diagnose quite a bit while the customer or I drive.
Masterworks Complete Auto Services
Volvo Spoken Here !!!
100 Park Circle
Old Hickory, TN 37138
Top

Do any of these reset the "Service" light? Not the CEL.
Top

No - It's a proprietary Volvo thing.
There's a tool by Draper that plugs into the OBD II port and resets it.
'98 V70 R - Well Equipped for Life Up North...