At odd, random intervals the motor will cut out, as if there is no fuel or electricity going to it. Just dies. Sometimes, when the vehicle is moving, it tries to restart itself (the old compression start). Sometimes it succeeds, sometimes not. I pop it into neutral - guide it to a safe spot on the side of the road if needed - and restart. No funny noises from the starter (no grinding or anything one might associate with a funky starter). It will start right up again. Sometimes it sputters but most frequently it just starts cleanly. If I rev it a bit on the restart, it won't gag or cut out. If I don't, sometimes it will gag. I took it to an AutoZone and they put the meter on it - the battery is fine and the alternator is fine.

It was very occasional until this week. The only times it would stagger or droop would be first thing in the morning on a cold morning, pulling out from the first stop sign of the day. And not every day at that. This week, it really started happening frequently. I think it cut out 5 or 6 times (didn't count exactly) in about 130 miles of driving today. If it cut out on the highway today i didn't notice it; all the times it cut out were on local streets, in parking lots, and pulling out from lights/signs.

My gut tells me it is something electrical, but what, where should I look, and most importantly can I fix it with duct tape, electrical tape or something similar. I am 450 miles from home on an extended project and can't get back to my regular mechanic until, probably, the end of June. The Yelp for the only mechanic close enough to where I'm staying to make dropping it off worthwhile includes the word "gouge" a couple times too often for my taste.
1996 850 Turbo Gold Edition, 7 years' reliable service and >220k mi, sadly now gone
2009 S60 2.5T, now getting acquainted.
Top

I suspect you have a bad fuel relay.
Your best bet is to buy a jumper wire with a built-in fuse (20A).

I wrote a DIY Fuel System trouble-shooting below, just scroll down the page to see how to jump #15 and #87 (you need Torx keys to open the fuse box).
Jumper wire is cheap at local auto parts store, buy some spade connectors and crimp them on as shown.
A paper clip may work in a pinch but it can burn your fingers if you touch it (search forum and you will see).
In fact, any owners of 850, S70 should carry this jumper wire in the glovebox. 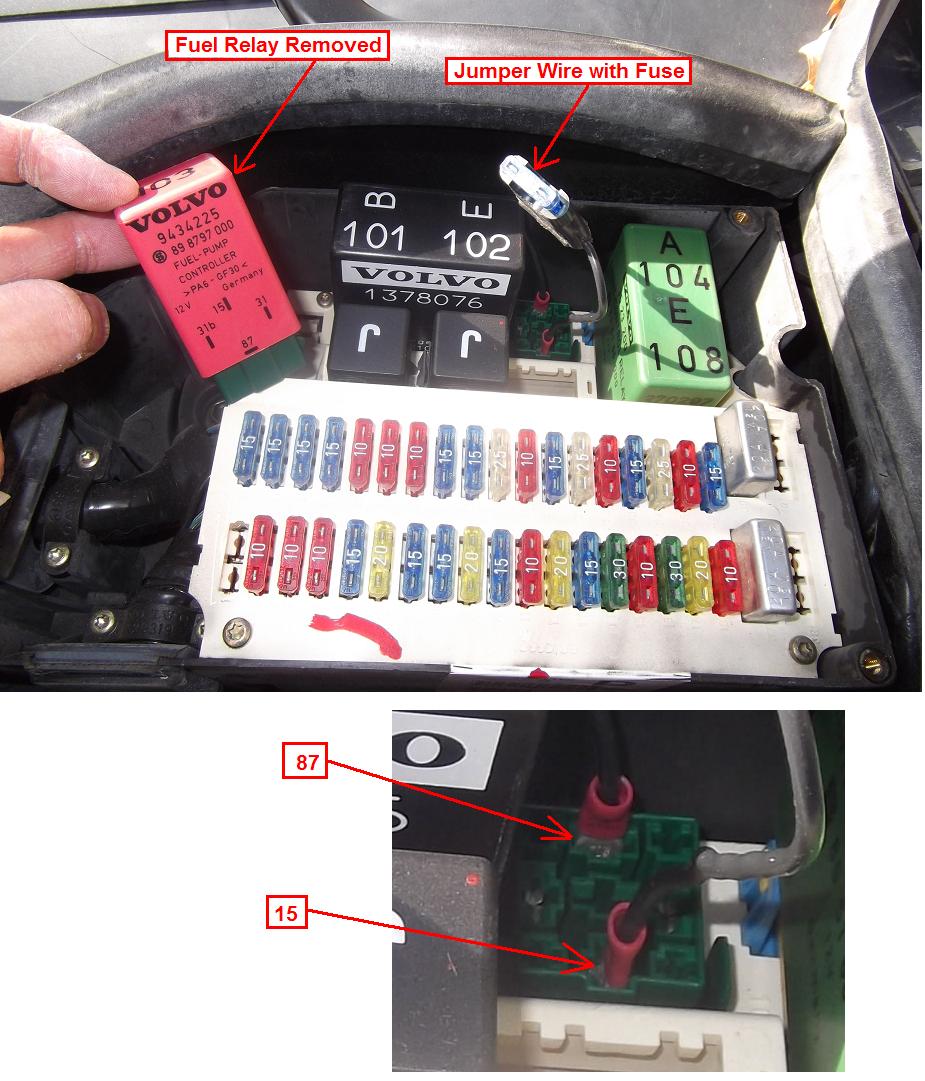 This is a common symptom of a bad relay . There are 2 that cause this often. The first is the fuel pump relay which was noted previously. There are tons of them in junkyards or just get a new one. It beats having to disconnect the fuel pump jumper wire each time you stop so you don't drain the battery or burn up the pump. But you should keep an extra or the jumper wire in the glove compartment.

The other relay is the main relay located above the radiator (powers injectors etc). You could wait to see which one it is ( fuel pump one goes bad more often) but when folks stop in with this issue (on original relays) and there is nothing acting up at the time I replace both relays. I have buckets of them from different junkyard cars. There are at least 2 different fuel pump relays so make sure you are putting the correct replacement in.

I'm sure an 850 expert will chime in on the red and yellow fuel pump relays and what years take which.

If the jumper wire is installed, once you stop the car and remove the key, the ignition is turned off and the power supply to the MAIN RELAY (upstream of the fuel pump relay) is cut off ---> fuel pump will be OFF with key out of the car. Been there done that.

So, if I go and get a jumper wire to use as a temporary fix until I can get a relay do I have to disconnect the jumper wire when I park the car or not? Running the battery down or frying the new fuel pump I had installed in 1/2015 are two downsides I am not interested in. (Damn fuel pump, tank and labor cost over $750.)
1996 850 Turbo Gold Edition, 7 years' reliable service and >220k mi, sadly now gone
2009 S60 2.5T, now getting acquainted.
Top

Get a voltmeter and do this:
- Black probe to ground and RED probe to terminal #15 in the Socket (fuel relay socket).
- Key out of the car: should be zero Volts.
- Key in position II: 12 V.

Another ghetto check with the jumper wire in place:

- Turn key to position II, fuel pump will run: get a screwdriver as a stethoscope and place it against the fuel pipe feeding the fuel rail (near the timing belt area) and your ear, you will hear fuel running through the pipe.

Fuel pump relay 9434225 ordered, shipped & in transit. I'll swap out the old and see what happens, then let you know.