I purchased this Turbo Wagon last year intending to drive it everyday, it has proven to be economical and reliable and it has really grown on our entire family. Recently it started to die under heavy load, (moving with the wheel all the way turned and with the AC on). I checked the codes and saw a knock sensor code (it does that one intermittently) and a MAF code. I had a spare MAF and IAC valve (my family has a lot of volvos) so i put both of those brand new parts on, and that took care of the MAF code but its actually worse. It will idle now but dies as soon as it goes into gear. Im sitting on a pile of parts and 1 parts car so i can troubleshoot easily. What do you guys think?
Top

She looks nice. Happen to check for large vac. /pressure leaks - such as the turbo pressure side? Could be a small leak that gets progressively worse as additional boost is provided, throwing the F/A mixture way out of spec.

Does it still do this if the A/C is off? Do any lights display on the dash with this issue shortly before or after it quits?
Wisdom requires knowledge as a prerequisite, but knowledge can be developed due to a lack of wisdom.
In order to learn how to fix something, you must first learn how to break it.
1999 V70 XC AWD - ~187k miles
Top

I have gone over the entirety of the charge piping, both hot and cold sides, no obvious leaks there that i can see. Idk if it will die with more boost, i cant even get it to run in gear to drive it and find out. Itll do it with the ac on or off, and no dash lights come on. It shudders and dies like if you stopped in a manual car with out pushing in the clutch
Top

I would second the vacuum leak. I just found one on mine - one of the hoses was slipping off in a hidden spot. I'd also check all the little vacuum elbows - they can fail and are kind of hidden.

You didn't say - is it just dying at high load and at idle? How does it do driving down the road? Or will it not even get on the road? If it's just at idle, it may be that the idle air valve is stuck or failed. You can check the impedance of the coil, and you can check that the gate inside moves freely. Then you can flush it with some solvent and clean out any gunk that is in there.

Other than that, I am assuming that everything else is generally up to snuff (ignition etc.)

I was having issues with my '96 GLT, where it would occasionally act like it wasn't getting fuel.

The last straw was when I would try and take off from a stop one day (a manual) and it would just stumble and die, or almost die. It would idle all day, however.

I checked fuel pressure and found some irregularities, and opted to dig into the pump. I took the old one out and found this--- 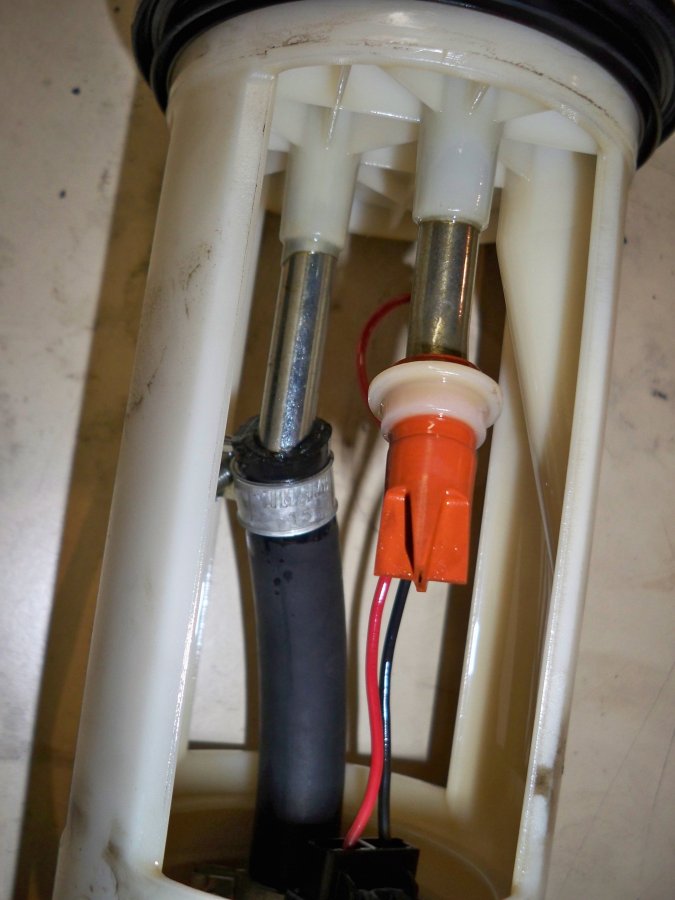 Someone had been in there previously and improperly installed the pump as well as used the wrong fuel hose. (non-submersible). Car was fine after an R&R of the pump with new hose.

A similar thing happened on my '80 240, but it was just degraded original fuel hose,
Top

Luke.T5R wrote: ↑
Wed Aug 30, 2017 4:35 pm
I have gone over the entirety of the charge piping, both hot and cold sides, no obvious leaks there that i can see. Idk if it will die with more boost, i cant even get it to run in gear to drive it and find out. Itll do it with the ac on or off, and no dash lights come on. It shudders and dies like if you stopped in a manual car with out pushing in the clutch

Take them all out and take a good look.

Thanks for your suggestions! Im gonna dig into the car today and see if i can find any split lines or anything. Ill report back if i find anything or not.
Top

Just went through the intercooler piping and none of the rubber was obviously cracked or anything. All of it looks relatively new. I also looked over the intercooler (what i could see) and didnt see anywhere it could be leaking. I also took a short video of what it does so you guys can see it too.
Top

Check your FP and see what it is/does.
Top
Post Reply