If you own a N/A 850 or S70 (and maybe others), you may wish to check your airbox thermostat. What I discovered three weeks ago shocked me about my own 850.

For the 1.5 years i've owned my 850, i've been trying to figure out why i've been getting only 15-16mpg city and highway combined (mostly city stop and go). After a while i've gave up and just thought thought this is just normal. I've done all the stage 0 maintanance items over at volvospeed and somehow i can't even drag another 1MPG out of the car. Auto-Rx and everything, just can't get more for some reason.

So about three weeks ago i've opened up my airbox to check the filter. Now something was bothering me here, after 12000 miles, the air filter is still surprising clean. It was unusal, because in the environment that I live in, the filter would've been naturally much dirtier by now and i know the filter isn't the dust and crap get through. So after reading some TSBs on airbox thermostat replacement on AllDataDIY.com, I thought:

"If the car's thermostat failed, that would mean that the airbox has been sucking in hot air from above the exhaust manifold all this time and maybe thats why the filter is not dirty

So I proceeded to take out the airbox thermostat. It was pretty easy, just open it up and at the bottom at where the air enters the box, there is a flat black plastic tab... pull it up and pull out the thermostat. Now you can't just leave it like that, because when the thermostat is cold it sucks in hot air... so I took a small fuel clamp and shoved it between the spring (that the thermostat would push against) and the where the plastic tab was, acting as a spacer, so that it would push the valve open to the cold air side. I did this so that I can run the car with cold air while I figure out this thermostat.

Well the first thing I did was take the thermostat home and inspect it. I cleaned off the dirt and crap on it and pulled out the center pin. I instantly saw why it failed. All the dirt and dust from the outside air accumulated on this thermostat, got past that seal where the pin goes in and contaminated the wax inside. I also noted that the pin was stuck when I applied hot water to the thermostat to try to simulated it.

Well three weeks later (and 300 miles later)... (today) OMG!! This car in the past three weeks have just amazed me in performance and fuel economy. The car really pulls now on the freeway and just so much more peppy. Today I filled up my tank and calculated everything, my combined MPG climbed 3MPG! I swear it could be more MPG if I didn't keep having my foot on the pedal (having too much fun with the newfound power).

I opened up the airbox today and the first things i've noticed is the airbox itself isn't as hot as it 'normally' was after driving it for a while and the air filter itself was suddenly DIRTY! For some crazy reason, in only 300 miles, my air filter literally doubled it's dirtiness!

I can't believe that i'm happy that my air filter is finally dirty! I highly recommend that every N/A 850/S70 check their airbox thermostat, because for me it really made a difference, a very noticable one!
1998 Volvo S70 T5 Auto

Is there any harm in running my car in the winter in Iowa without the hot air circulation to the airbox???


It looks like I have the same thing going on. Admittedly, it's only 30 degrees outside, but after a long drive, I pulled the hot air hose to the exhaust off of my airbox and gave it some throttle.. All of the suction to the intake was coming from the exhaust side and 0% from the cold air inlet.

Not only does this feed hot air into your intake, but the size of the hole is physically smaller.

I have everything apart in my house now and I've got the thermostat piece in the fridge. How in the world do you test it? I ran it under hot water (110 degrees F) and the center pin pushed out only about 1mm

judging by the way this valve works, it'd have to be pushing a lot further than that to flip the valve over to 'the cold side'

Well, I have to thank you for the tip. I ended up using two pieces of wooden dowel to hold the flapper over to the cold side.

And since people put cold air intake systems on cars all the time, I guess I'll just not worry about the hot air. 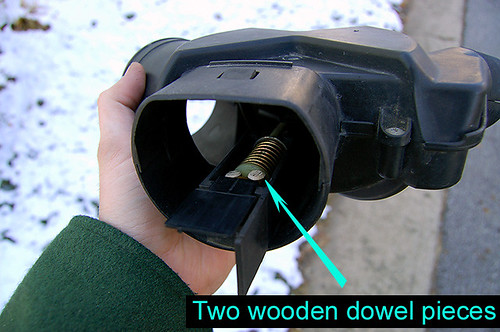 yes, that's snow on the ground

Where exactly is that piece you're holding in your hand? I've looked at my S70 and don't seem to find it. Maybe mine doesn't have it? However, if it does, I'd like to check mine to and make that modification. It doesn't get that cold here in E. Tenn and I'm sure that if I can keep hot air out of my intake it would do my gas mileage and umph a world of good.
'98 S70 T5 Emrld Grn Met/Beige Tons of Upgrades Mobil-1
'04 V70 2.5T Red/Taupe Some Upgrades Mobil-1
'07 S40 T5 AWD 6 speed manual! Silver/Black Stage1 Heico & Elevate
'07 S60 2.5T Blue/Taupe- my kid's Volvo
Top

Remove the air intake body from the air cleaner housing by depressing the two tabs. That bit is inside.

just take the top of the airbox off and reach into the place where the air comes in. The piece I'm holding is the fitting that both the cold air and hot air hook up to. It removes from the airbox in my case.

To remove the airbox, I just unhooked any plumbing to it, and undid two vacuum lines on some sort of valve that's screwed to it. I also undid the wiring connector that plugs into the valve. Then I was careful, but just pulled up and popped out two lower plastic connection points.. then the airbox slid in, toward the engine to release another plastic-in-rubber mount on the fender side.

It was pretty straightforward. Once I got the piece I'm holding off of the airbox, I was able to take it apart and see how everything worked.

If you're wanting the quick fix, just work the flap internally with your hand and hold it so that the cold air side is open. Then wedge the dowels or whatever you want into the spring assembly to keep it set at cold air only.
'94 Gunmetal Gray 855 2.4L 100% stock. This is Volvo #7.
Top

These might only reside in NA cars.. I'm not sure.. My Volvo 240, 960, and 850 all have them. The silver colored ductwork from the exhaust manifold to the airbox is the giveaway I guess.