Cam Timing, What’s All The Hub Bub?
Camshaft timing for the non-turbo crowd is a hotly debated item but there are some basic rules of thumb that most people agree on. For those of us in the turbo crowd it’s quite a bit easier to find common ground and agree on what clearly works and what clearly doesn’t. For this weeks’ Fast Friday article we’ll cover cam timing as it relates to turbo cars since that makes up the majority of the Volvo market. For you non turbo folks, post up in the comments and I’ll be happy to answer any specific questions.

Cam timing refers to the opening and closing of the valves relative to the rotation of the crankshaft. So advancing the cam timing means the valve is opening sooner, and consequently closing sooner. Retarding the cam timing is the opposite, the valves open later and close later. For Volvo twin cam engines the exhaust and intake cam shafts can be adjusted independently but it’s necessary to be aware of how they can relate to one another with regard to overlap.

Back Pressure: Friend or Enemy?
Surprising as it may sound the backpressure of the exhaust between the cylinder and the turbine is in nearly all cases higher than the pressure at the intake manifold before the intake valve. I say nearly all cases as there can be instances of what is referred to as ‘cross over’ where the intake manifold pressure is higher than the exhaust backpressure in the turbine, however this is uncommon and occurs for very short periods during the development of boost pressure in a typical road car. So if the engine cam shafts were adjusted such that some overlap occurred this would be very undesirable since the exhaust would back fill into the cylinder and dilute the incoming fresh air/fuel charge. This ultimately reduces power and efficiency which we don’t want.

Twist those bump sticks!
Cam timing in most twin cam Volvo engines tends to be a bit overly advanced for most performance enthusiast. Additionally the TD04 family of turbochargers that comes equipped stock on these cars has very restrictive hot side (turbine) housing flow rate, meaning upper RPM performance will tend to suffer a bit as the turbo is pushed outside of its efficiency zone. Past a certain point, the higher the boost pressure and the higher the RPM the more inefficient the turbo becomes. So it’s not surprising to see them set stock cam timing to influence the efficiency of the engine toward the mid-range RPM where the turbo is most effective and where most folks tend to spend the majority of the time while driving. However since many performance enthusiasts will increase the engine power output with tuning of the ECU, installation of a larger turbocharger, and general parts upgrades that improve engine flow, the stock cam timing can become a necessary change to maximize these upgrades. 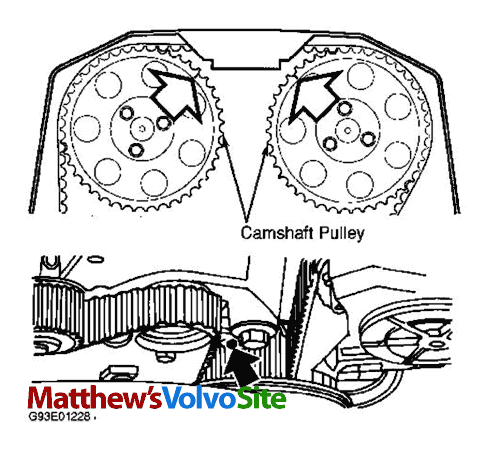 Use the Right Tool
Cam timing changes should be done with a properly precise tool, in a pinch a good protractor can be used, however a purpose built cam timing tool is preferred. Many aftermarket suppliers offer these and can be found from various vendors online. As a whole, advancing cam timing will shift the engine efficiency zone (called the power band) early in the RPM range while retarding it will shift it to later in the RPM range. Either way you adjust your cams you should adjust each cam so that the overlap between them stays at 0 degrees. For most applications where higher than stock performance is being made retarding the cams is the best option for broadening the upper RPM power. If you’ve installed non turbo cams with higher lift and duration into your turbo motor be sure to account for that with proper timing since non turbo cams start opening sooner and stay open longer than turbo cams.

Not sure what you need your cam timing set to? ASK US!
Help keep MVS on the web -> click sponsors' links here on MVS when you buy from them.
Also -> Amazon link. Click that when you go to buy something on Amazon and MVS gets a kickback.