Air Fuel Ratio: It Matters
Air fuel ratio (AFR) might not be a very glamorous topic when it comes to performance but it’s quite useful to have a good understanding of the subject when it comes to both power and efficiency. After all, un-burnt gas out the tailpipe doesn’t do much good for us either. So this week let’s look at AFR and what it’s all about!

Rich vs. Lean
To start we should understand that there is an ideal mix of gasoline and air that is desirable for the most complete combustion. This ideal mixture is referred to as the stoichiometric ratio and for typical gasoline engines it is calculated at 14.67 or rounded to 14.7 parts of air to 1 part of fuel as measure by weight. This ratio provides the most efficient combustion with the least pollutants. An air fuel ratio above 14.7 is considered as a lean mixture while any AFR below that is considered a rich mixture. Now with that said the stoichiometric mix of air/fuel has changed some over the years partly due to the addition of ethanol into the fuel and partly due to additives that are added to the fuel. This puts the ideal AFR closer to 15.2 parts of air to 1 part of fuel. That’s right, the engine can actually use less fuel at idle and light throttle cruise than it used to, due to these additions in the pump gas we typically see here in the states. This is, in part, how we are able to squeeze out increase MPG via ECU tuning. There’s a bit more to it than that but it’s a considerable contributor to the more efficient combustion we are able to achieve through tuning. It’s not surprising either when you consider that the ECU for your car may be operating on calibrations that were intended for gasoline types that existed 10+ years ago.

What about performance?
The ideal AFR for performance is 13.2 as this mixture ratio creates the fastest flame front once the air/fuel mixture is ignited in the cylinder. The faster the flame front travels, the faster the cylinder pressure is built up, which means we can more precisely time the ignition event to allow the peak cylinder pressure to act upon the piston top at the exact right moment and with the most optimal pressure transient. All that geek speak to say, faster flame fronts are better for engine power development. Now with that said what about engine heat? Particularly with respect to the pistons… after all they are just aluminum and with combustion temps reaching over 1600F and aluminum melting as early as 1200F how do we keep the pistons from melting? 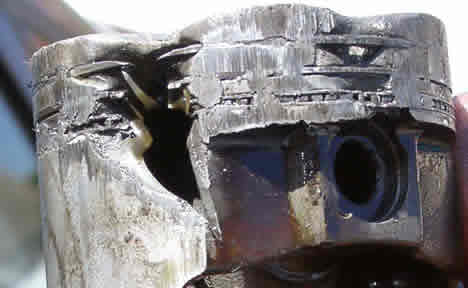 Keeping it cool
Combustion temperature alone is not a direct indication of piston temperature. The cooling properties of richer air fuel ratios along with piston oil coolers reduce piston and cylinder wall temperatures substantially. While 13.2 AFR is the ideal ratio for power it is not uncommon at all to see AFR’s go as rich as 11.4 to add additional fuel that will change state from liquid to gas once it comes into contact with the cylinders and pistons. That state change absorbs heat energy as the fuel boils off. This is known in the tuning world as “lambda protection” and it is done for the sole purpose of keeping the engine cylinders, combustion chamber, and pistons from overheating. There is no one ideal AFR for all engine configurations. Each engine can take a differing amount of heat as compared to the next engine so developing an intimate knowledge of each engine within a vehicle line is important so as to fully understand the limits and balance of AFR as it relates to both power and efficiency. Some engines can take higher temps for longer periods, other cannot. This balance is what good tuners strive to understand and master.

AFR and the dyno
Chassis dyno testing is a popular way to test the power output of a given engine and power train, however dyno AFR measurements need some interpreting to be fully aware of what the data means. One undesirable characteristic of many chassis dyno testing facilities is the insufficient airflow over the front of the vehicle to adequately cool the intercooler and radiator. This can cause the ECU to enrich the fuel mixture to reduce combustion temperatures as the charge air temperature has risen as a result of this insufficient cooling. Additionally since the AFR readings are typically taken after the catalytic convertor, the remaining oxygen content in the exhaust is reduced which can in turn cause the reading to show richer than the actual ratio. Since 1999 Volvo models have been equipped with a factory wide band AFR front oxygen sensor so proper datalogging though the OBDII port is possible and provides the most accurate data. 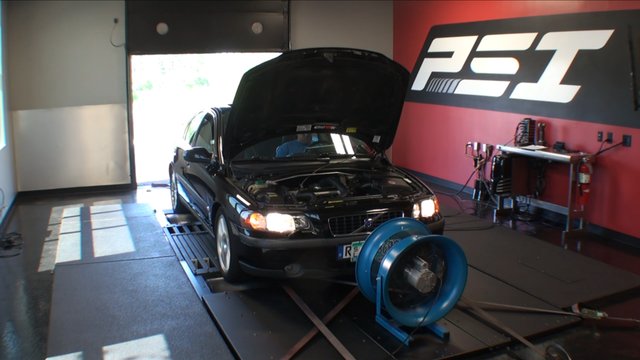 As a side note it’s interesting that the factory fueling maps as early as 1990 would drive AFR targets as rich as 10.7 if necessary to protect the engine against both high combustion temps and to help ward of detonation which can be very damaging to the engine and also happen to be triggered by higher combustion temperatures. For many late model cars that remains still although it is not as consistent model to model as it used to be. Each engine configuration has its own particular requirements and considerations and as engine technology increases, more precise calibrations make each car a unique case in and of itself.

Sometimes the totally predictable, the mundane, the obvious... can be totally shocking:


...the ECU for your car may be operating on calibrations that were intended for gasoline types that existed 10+ years ago.

That makes so much sense, Lucky, yet I've never heard a peep from anyone about it. (And to be fair, nor have I thought it up.)
Help keep MVS on the web -> click sponsors' links here on MVS when you buy from them.
Also -> Amazon link. Click that when you go to buy something on Amazon and MVS gets a kickback.

It's a simple consideration but it can have a considerable impact on tuning, efficiency and of course power