Catch up to this week? No Turbo? No Problem! Part 2. Take the Fast Friday Poll.

No Turbo? No Problem! Part 3.
With intake systems being one of the more popular upgrade parts for vehicles, and with consideration to the upgraded intake system on the non turbo build, let's take this week and talk about engine breathing and intake systems!

The Sum of Go Fast Bits
This week it's all about the install as we take our collection of go fast bits and fasten them down onto the engine! Install went quite well and honestly is pretty much within the grasp of the average enthusiast so I hope to see this be more than a one of a kind build.

Pulley: The easiest part we installed, we lost 4lbs of weight from the OE unit by replacing with the lightweight unit from ARD, will it help….? Who knows but lowering weight won't make us slower 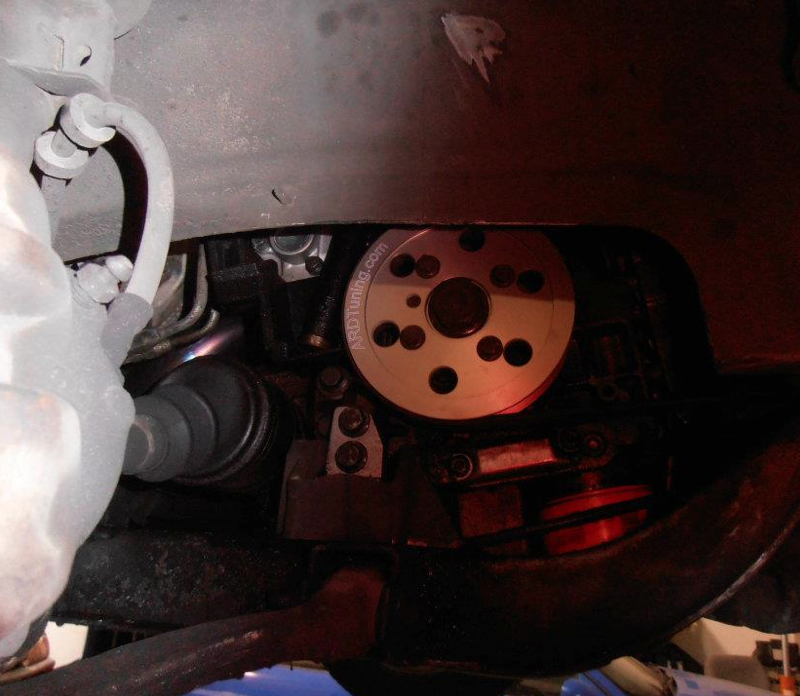 Ignition coil: It's a family affair when the manchild steps in to install our MSD coil from Eurosport. Cutting off the old rivets and bolting up the included bracket makes it fit like a glove! 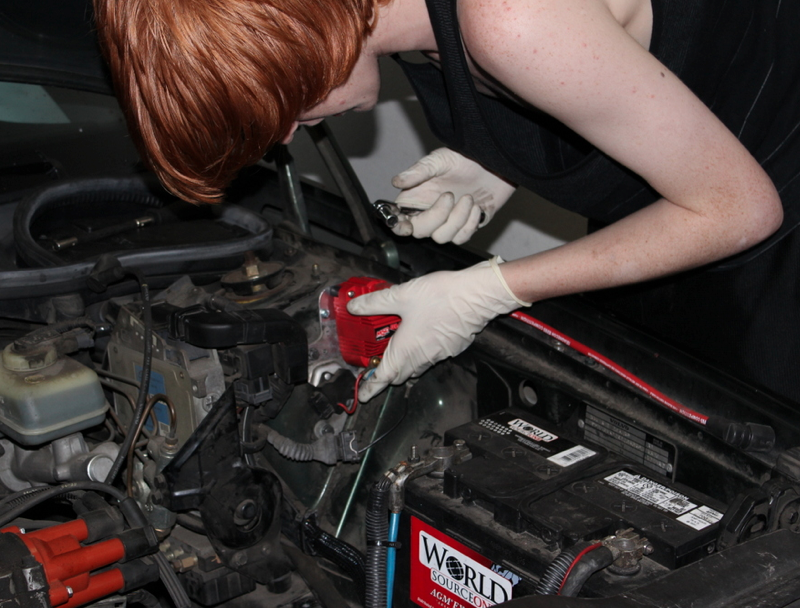 Exhaust: Our original header was shockingly full of carbon such that, by my measurements, over 10% of the flow was reduced by virtue of the caked up junk. That alone should give us some benefit. 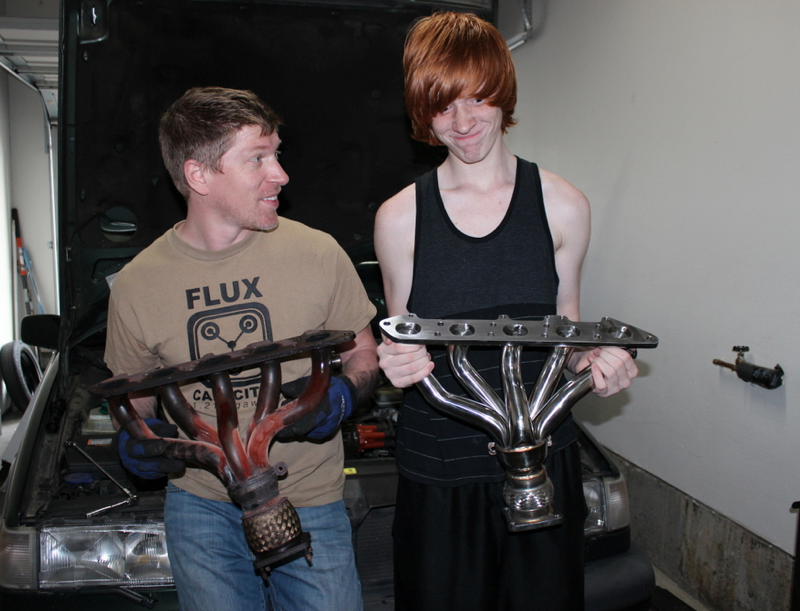 Battery: We rotated the battery mount 90 degrees to give us a bit more room for the routing of the air filter and inlet tube. Ultimately it wasn't all that necessary but since it's such an easy mod that requires no parts it seemed worth it anyway.

Airflow: We enlarged the air inlet openings behind the front grill to help encourage airflow into the intake as well as provide additional flow over the radiator to keep temps down as much as we could. 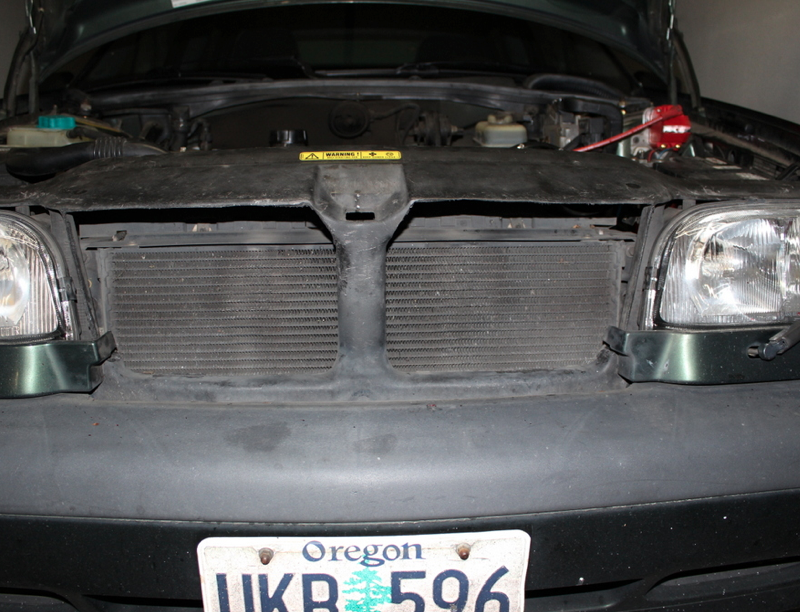 Intake: This was bar far the most unknown part of this build. Everything told me it should work but how hard would it be to make fit? Turns out.. not bad! A lot of back and forth with the install to make everything bolt up but once we were done it looked like an OE fitment… aside from the dry flow K&N filter. This is the more involved part of the build so we'll spend the most discussing that. 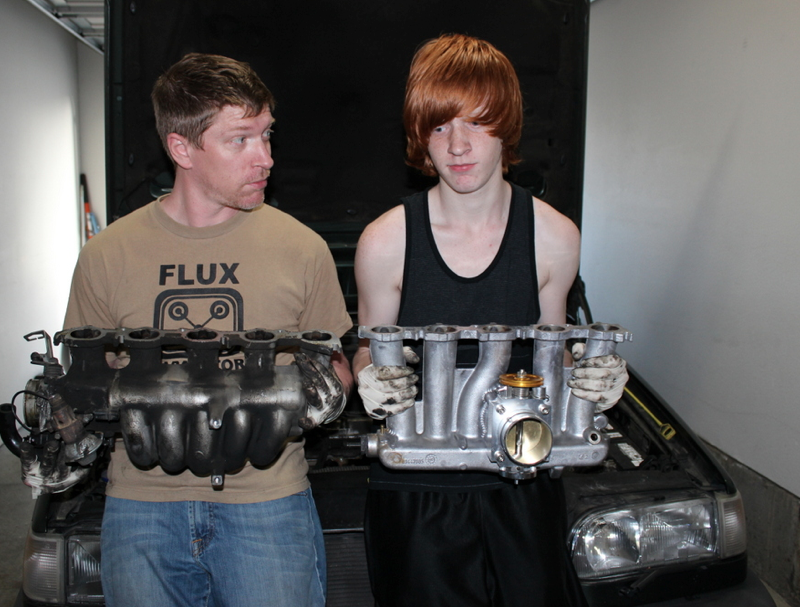 First, the boss on the side of the manifold directly interferes with power steering reservoir so it has to be shaved off. I left the surface rough for the pic so you could see the area in question. Once done we smoothed it out a bit with the sander. Note: We had to remove the PS pump to be able to fit the intake into position then reinstall the PS pump. Without this step we could not get the manifold to clear the PS pump return line. 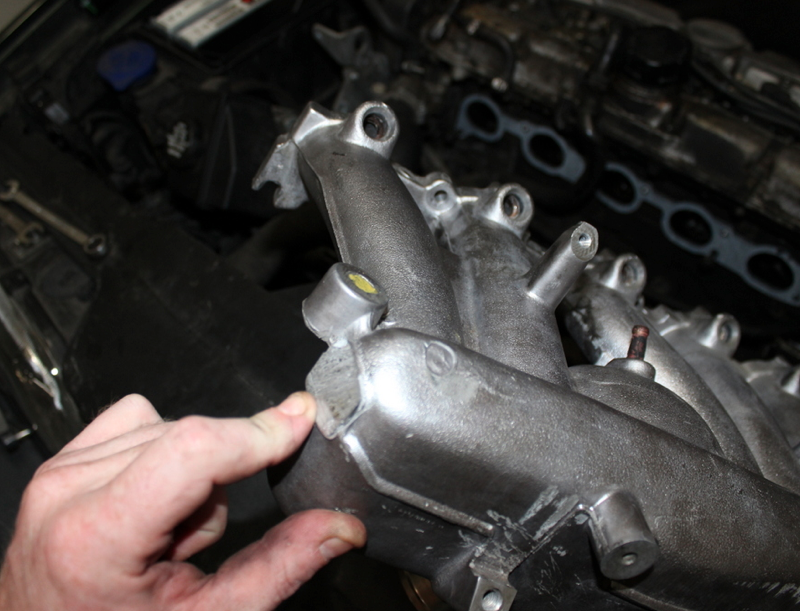 Third, The TPS had to be re-located to the new throttle body. Fortunately the shaft diameters are identical so a few drilled holes later and we were in business. 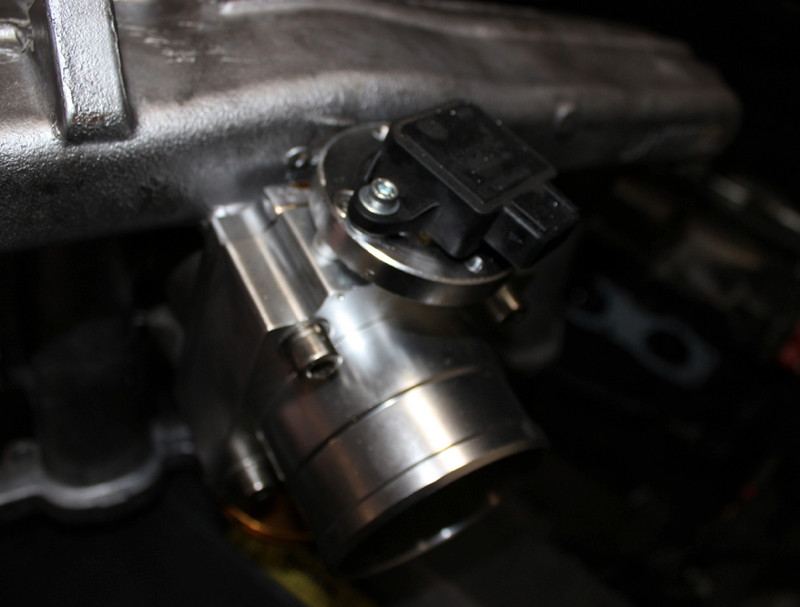 Fourth, The factory throttle cable was about 4 inches too short to be able to connect up to the new throttle body so a bit of cable from a previous project allowed us to lengthen it enough to grab on to the bell crank. After that we used the factory throttle cable mount and bolted it up to the far right (unused) manifold mounting hole by cutting it down a touch and bolting it on.

Fifth, The PCV had to be reconfigured as the original system was integrated into the air inlet tube. Going back to the early red block PCV of similar design made connecting up to the oil separator box a dream. Connected right into the high flow filter we used and then routed to the hard plastic line from the oil separator box. Vacuum nipple off the side was connected to the inlet manifold itself. 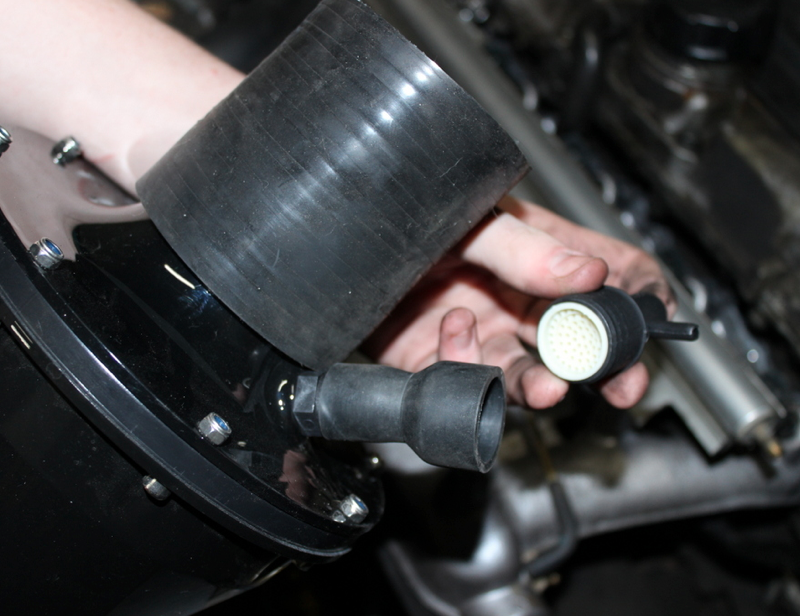 Sixth, We used an oil dipstick tube and dipstick from a later ME7 car so it would bolt up to the new intake manifold as the mounting point is different from the early to late manifold design.

Seventh, Wiring for TPS and MAF had to be extended by about 6 inches to reach the new sensor locations. Proper soldering and shrink wrap made quick work of that. Note for this build we deleted the EGR and the IAC. This was done for both simplicity and ease, although we did use software from later model cars without EGR so the tailpipe emissions are not negatively impacted. IAC removal does mean the idle can be affected a bit when the A/C compressor turns on but this proved to be a minor issue and wasn't nearly as impactful as I initially suspected. 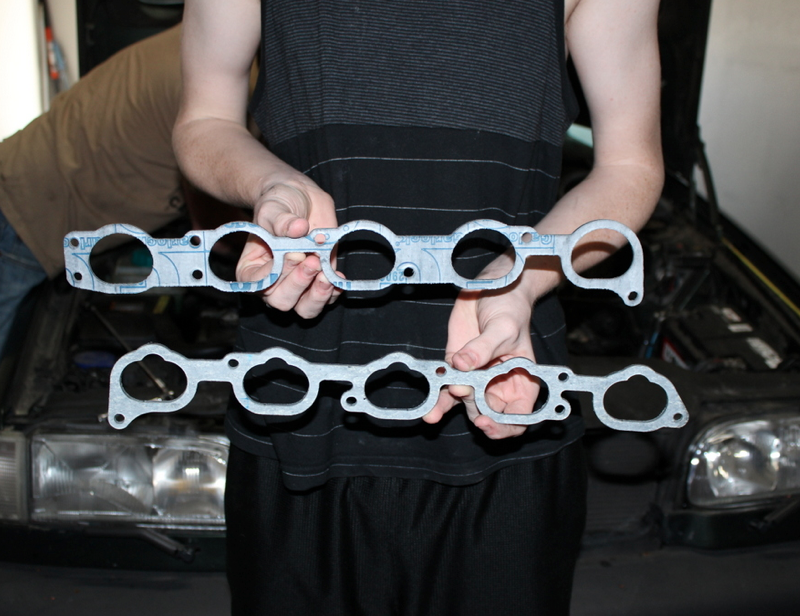 Now it's time to get track side! Stay tuned for the final episode of our non-turbo build! 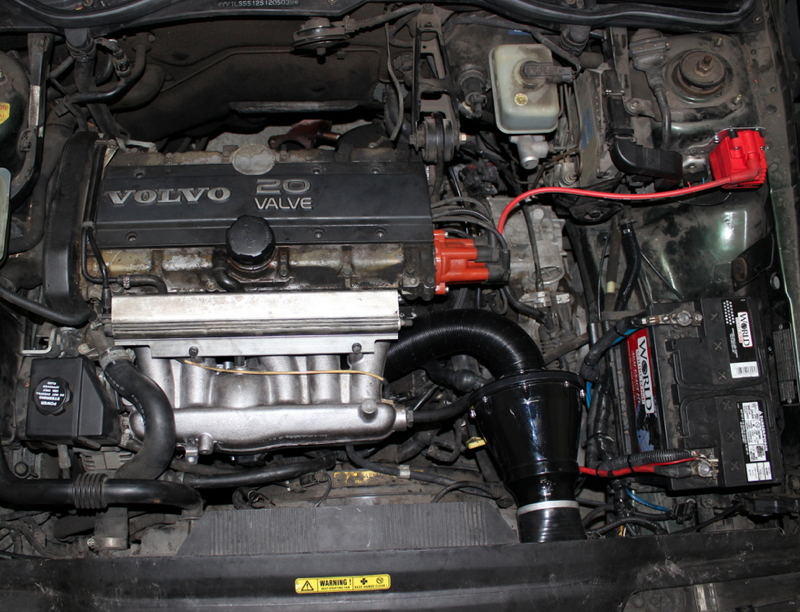 Two questions:
1) My car has a working VVT system. Would moving to a short intake as you did above, make a huge diff over what I have?
2) Tell me more about the air filter and intake system that you used. Is that something custom?
Top

I just love the pic of you and your kid holding the manifolds. I give my kid those looks lots of times.
Top

Yes indeed, was big fun doing the install with the boy!

As for Mr.willie
1. Perhaps, assuming you are an ME7 non turbo?
2. It's an off the shelf K&N Dry flow air filter with housing

Hi I was just wondering what software you used to tune the ECU? Also, is there any way you could share the tuned .bin and .xdf files? I have looked everywhere and I can only fine the files for the T5s. Thanks a lot!
Top

I use Swiftec to tune the files but no XDF. I can ID maps by shape at this point

Although with Swiftec most maps are auto recognized.

As for sharing the tuned bin... I think the CEO would probably strangle me if I did that!
ARDtuning.com - Follow us on Facebook
Top

Great write up Guys I moved to the turbo cars about a year ago I do miss the reliability of my N/a 850 and hope to see some good results from this. my question is how much mod was required for the 99+ Intake manifold is it just what we see.
Top

Hey Lucky, can you post an in depth step by step on the intake manifold mods? That is really intriguing.

The main gain in switching from the original long runner manifold to the shorter ME7 manifold is upper RPM power band. With matching tuning we saw a notable difference at 3500+ rpm power levels. 10-15 bhp in band shift. So while it's a notable increase it's more highway/touring car power than stop light to stop light.

As for install it's fairly straight forward, I've since removed all the parts from the car and have it up for sale in stock form. The main issue is the tight squeeze coming off the manifold and around the starter, good silicone bends with proper radius helps alot here. I have some additional pics for anyone interested, I'll see if I can find them in my notes.