I just swapped my key over to a later ebay blank with the plastic loop on bottom. My factory key had a broken spring and the battery cover was missing. Pulling that glass chip out was nerve racking, I did it in my office and was afraid if i broke it, then i would be stuck at work

I need to look into my radio reception, its terrible. I assume there's an amplifier since the antenna is in the glass. I'm going to start there, checking fuses and voltage. I have one of those aftermarket inputs to the "CD Changer" channel but when i plug my phone into it, I get a lot of high pitch noise. Its even more annoying than the crappy reception and this is very near downtown Pittsburgh, my radio searches through Pittsburgh stations and even when catching one, its not very good quality
Top

helped a buddy this weekend fix a 06 xc90 t5 he got for $850. Lady had timing belt changed a month ago with new water pump installed. The water pump seized like 500 miles later and snapped the belt but not before bending, and bending bad, all 20 valves. So I took 2 of his old heads and cleaned and replaced all 20 valves.

Then mine started acting up, twice now since i got it, I had the oil light come on. I checked oil and its fine but bubbly while running so it looks like i have to reseal the pan.
Top

and here's where i stand with my XC90. I replace Maf and Gas cap so far, turned light out Saturday, drove it a few times, no light so far. But it did have a stumble at idle, similar stumble before light for MAF comes on. Before I replaced the MAF i noticed my short term fuel trims were all over the place at idle, now they sit at 0 and LTFT is at 1.8, So it seems where it should be. I also added in fuel injector cleaner that helped a lot 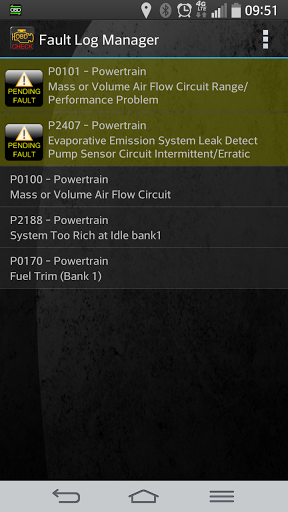 XC90 still has those codes with a new gas cap so i'll have to pull spare tire,somehow, and inspect the LDP and lines. MAF codes still there too but maf is good?? Pretty sure it might be my filthy PCV system, i dont have the top breatehr hooked up anymore, its a mess

The XC70 flashed the oil light on me a couple times, i inspected the sensor wir and snugged up the pan bolts and it hasnt come back in a week so far. Now i just have a "Time for Regular Service" light that i cant get to reset. My trip miles never come back when i hold it in. But i found another write up with more detail on timing so i'll try it later.
Top

I hate to bring this up post fact, but I think the lore is that most here will not use anything but Volvo parts for the timing belt area. Dayco is a decent brand but you are relying on this for the next 10 years. something to think about.

The harmonic balancer nipple has caught many people doing the timing belt - I found it when I did my P2 earlier this year but was armed with MVS knowledge.

You do need to pull the serpentine belt tensioner all the way to the stop to get the belts on - and, yes, the intution on the belt path is quickly lost once the belt is off.

Welp. Its time to tear aprt the xc90 2.5. The oil leak is terrible, twice in the last month I've checked the wifes car and its 4 quarts low.

I did the timing belt on my xc70 last winter and it was a walk in the park. The cam seals are making me nervous though from everything i read about the VVTs and how to reposition them correctly. I plan on making a tool that fits the ends of the cams to lock them in, Im just lost on the hole 2 tooth rotation or whatever and if my hubs are even still ok to use. Im hoping to majority of the leak is caused from the clogged pcv. Although i vented the tube coming from valve cover in hopes to slow the leak with no noticable reduction
Top

finally tore apart the XC90. It got to the point that it barely ran, all the typical MAF codes, the idle issue, the stalling. I knew it was time to clean the throttle body and do the PCV while I was at it.

This was probably the worst easy job ever. I m/f'd that thing so many times my neighbor retreated indoors. Im constantly pulling my subaru apart (550hp ej22) and have dealt with bleeding fuel pressure to remove the lines. Nothing prepared me for the amount of fuel that came out of that rail when i pulled it off the intake manifold, It soaked everything, it got in my eyes and it was a terrific start. Its like the fuel line had a bladder tank.

The second wonderful surprise was the far left hand manifold bolt strategically placed behind the thermostat housing. lovely. BUT at least it didnt need to be removed, just loosened, as the lower manifold holes are slotted to allow the manifold to be lifted up off the lower bolts. I ended up not even loosening the bloody thing. i removed the other bolts and just rocked it off the far left bolt.

At this point cleaning the throttle body was easy so i did that, put a new gasket on and set the mani/throttle body aside.

Now i wasnt about to pay $300 for a hose so I decided i was going to at least attempt to clean mine first. This wasnt as bad as i thought. The little plastic hose was clogged, the banjo whatever that bolted to the manifold was clogged, the drain port the the block was clogged. The trap was yucky, but i did buy a new trap, and it turned out to be wrong. The top port to the valve cover was in the wrong spot.

I used a drill bit to clean out the bango thingy, i swiped some adapters and hose off an old subaru maifold to replace the little plastic line, and i sed a ziptie as a hose clamp to hold the larger elbow from the trap to the block. With enough brake cleaner and compressed air i was able to get everthing else free flowing again.

Reassembly wasnt terrible, the only issue was that left hand mani bolt again. Its not exactly tight. i even shaved a 10mm socket downt oe paper thing trying to get it to clear the thermostat housing but no luck. My buddy that works on them more than me says he uses 1/4" sockets and a few swivels and extensions to get it. In hindsight i wish i would have cut a slot into the head, then I may have been able to get a flathead screw driver on it, Or i could have replaced it with a socket head screw.

The hole process took me about 4 hours. I did not do the cam seals yet, was hoping to see if cleaning the pcv will stop the leak on its own. The car now does run much better, the idle issue and pedal delay is gone.

So far, 4 days later. No returning CEL. I did get a p0026/27 after words but a fresh oil change with 10w40 seems to be keeping oil pressure high enough not to trip the vvt sensors
Top

Tried repairing my XC90's AWD last night. Anti Skid lights been on for years. Funny thing is it usually works when its cold. But the wifes been complaining it keeps peeling on out wet hills so i picked up a complete lower mileage haldex unit for local yard for $60. I had codes for "DEM oil pressure issues" and an ABS code for "no communication with DEM" or something like that.

So i pulled the DEM module off the "new" unit to see what i was getting into. It was in good shape so i swapped it and the oil pressure looking switch on my unit. Total fail! Now the anti skid light comes on instantly and the code reader doesn't even see the DEM anymore, tell me to make sure vehicle is equipped. Like its not recognised by the car. So im guessing they are VIN specific and that's why yinz repair yours. Make i can leave in new oil pressure switch and put my DEM back on.
Top
Post Reply