Rattnalle wrote: ↑Sun Sep 16, 2018 2:48 am It looks to me like that hose clamp light be sitting too far out from the engine to seal the connection properly.

That.
Its wicking equally all around.

Better clamps have a curved foot under the screw section.
That clamp forms a D shape.
Top

If you do Oetinger clamps they might seal better.

Did you use blue box stuff or (arghhh) off-brand?

Regular clamps also seal well if torqued right and positioned right. I think it looks like it would sit at the very edge of the little pipe on the engine as it is now. That won't help regardless of clamp..
Sweden-Italy-France Roadtrip
Top

The hose clamps aren’t the worst quality, but they’re also not Volvo spec. They came with the iPdVolvo aftermarket PCV kit I used last year.

Definitely a leak there ( maybe clamp has cut hose?) but there is oilabove that too, maybe more than one leak?

erik...Ill need those Volvo horns back for a day or two, until my next screwup...

I'm not sure what the size is. I already put everything back together so I can't measure the diameter of the hose. I just know I need a couple of these:

If helpful, there's also the ID on the worm clamps that are currently installed, "Gemi 20-32": 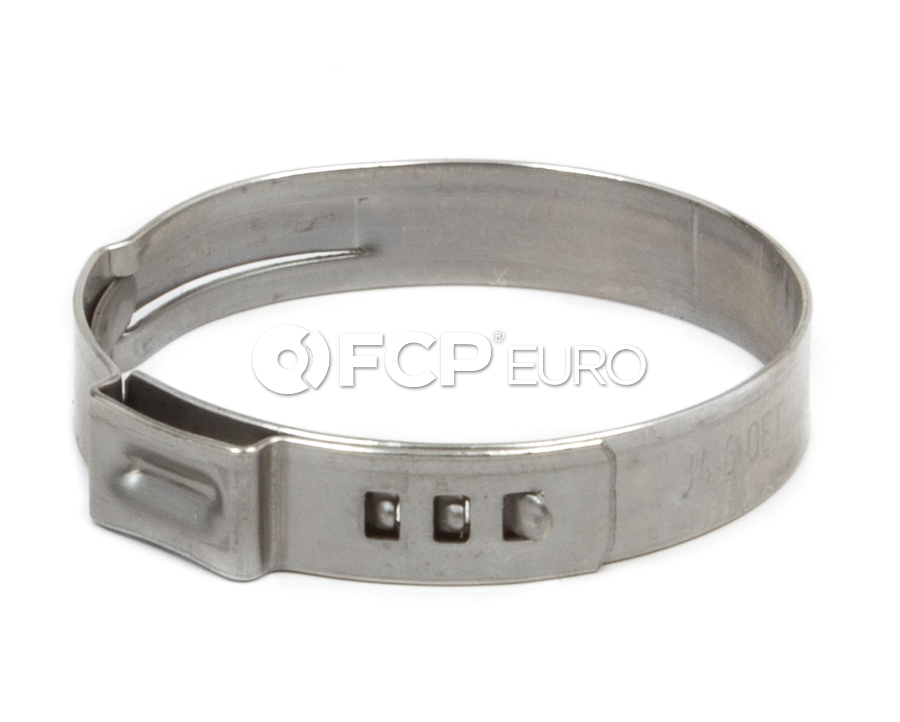 PM your snail and ill put some in the mail to cover those ranges.

Do you have a good pair of dikes to mash them down?

To gain access, I removed the power steering pump, alternator, fan shroud, throttle and throttle pipe. Not the intake manifold. In retrospect, this wasn't a great idea. I've removed the alternator several times but had forgotten what a bear it is. Ugh. The two lower bolts are absolutely killer... probably 5 inches long with 2" of thread. I don't have any power or air tools that will fit down there so it was just a lot of hand ratcheting. Also, while this method did allow me to physically get my hands on the PCV system, the view was terrible and access still wasn't great. Next time, I'll take the "removing the intake manifold" route. Access to the PCV system is much better that way overall.

I put everything back together and the car started up fine (always a blessing). After a day and a half of lots of driving, there is no longer any evidence of a leak where the hose meets the block. The hose clamp appears to be well positioned (but BOY is that a really inconvenient spot to get access to the screw on the hose clamp, especially since I put the screw in a different position so that it wasn't sitting directly over the tear in the hose). HOWEVER, in my haste to reassemble things, it appears that I didn't properly position the OTHER hose clamp, and now that's sitting back too far and the oil trap looks to be wet just underneath the hose, so I've created another leak. At least I know it's there and how to fix it. Good connection circled in green, bad connection with new leak circled in red:

I overdid it with the work on Sunday, spent from 2:30pm-10:30pm with a dinner break. Normally I might have paced things out over a couple of days, but since we only have access to one drivable car right now it had to be put back together by Monday morning. My father-in-law's 2000 Mercedes E320 4Matic (W210 chassis), which I generally drive while he's away for the summer, has been out of commission for a while with a failed starter. I generally don't work on his cars, and especially not this job:


There are some projects that seem like they should be relatively routine--and are very easy to perform on other cars--but are a huge pain on The Mercedes W210 with the M104 engine. Replacing the starter is one of them. Most other cars I've worked on have had relatively accessible starters. If you are quick with the tools, you can have the starter replaced within 15 minutes on some engines. Not so with the W210.

The starter is in a completely absurd location. It's not accessible from above at all, and to access it from below requires you to remove half of the exhaust system and part of the AWD driveshaft, and even THEN you have to use a tenuous series of extensions and u-joints in order to access the bolts. Anyway, he should be back to fix it this week, so my hope is that we'll have an extra car just in case.

My plan for this weekend is to remove the intake manifold to gain access to the PCV system. I'll need to order an intake manifold gasket as well as a replacement lower PCV hose. I might still order some hose clamps in case the ones abscate sends aren't a good fit. Also considering ordering Oetiker clamps for other PCV hoses to replace existing worm clamps.

I'm reviewing FCP Euro's video, which hadn't been published yet when I did the PCV job last year (it came out halfway through our road trip): . I'm trying to determine if it is actually necessary to remove the injectors from the intake manifold, which I did last year and which he does in that video, or if I can simply depressurize the fuel system, decouple the fuel line and remove the electrical connectors, and remove the manifold and injectors as a single unit. I remember them being a bit delicate so if I don't have to yank them from the manifold I'd rather not.

My other concern is about damaging the dinky middle PCV pipe attached to the PCV nipple when removing the banjo bolt from the intake manifold. Not sure if I should order an extra to have on hand (the video above recommends using this one from the T6 engine as a replacement if it breaks: https://www.fcpeuro.com/products/volvo- ... o-30731007).

As a bonus, in all of the jostling around, I snapped off the nipple for the vacuum hose that goes from the TCV to the fresh air intake next to the PTC nipple. So for now I've got a piece of duct tape covering the hole leftover from the snapped nipple, another piece covering the end of the hose that has the nipple piece stuck inside it, and the TCV electrical connector disconnected. Obviously this results in no turbo boost, but things seem to be running fine otherwise. Not sure at this point if I'll even bother fixing that, as it would require replacing the whole pipe from the MAF unit to the turbocharger.
Cars I've owned:
- 2015 to current: 2001 Volvo V70 2.4T; 2004 Honda Odyssey
- 2007 to 2015: 2002 Subaru Legacy L Wagon
- 2003 to 2016: 2001 Toyota Corolla LE
- 1999 to 2003: 1994 Toyota Camry LE
Top
Post Reply
65 posts