Wondering if any of you have put a Double DIN Head Unit in your XC. I am wanting a full screen unit to use in tandem with a backup camera/dash cam I am going to install.

Looking for install tips and inspiration! Not a lot out there as far as install tips go, sadly. Any advice is great.
Top

I have a double din unit installed in my xc70 , sorry it was years ago but i used the genuine Volvo double din part sold by IPD.

Despite being genuine i remember having a small issue with a large gap between the radio trim and the climate control trim, something needed trimming to make it fit good.

I have 2007 XC70. Just replaced my Volvo HU-650 stereo with a Chinese unbranded 2-din touchscreen stereo with USB, TF-card, Bluetooth, rear camera and mirror-link for Android, i-Phone. The head unit cost $50 and I bought an adapter kit with faceplate and wiring adapters for $30. Installation was easy (1/2 hour) plug-n-play. I didn't mount the rear camera yet. Still figuring out where to mount the camera and how to pull the wiring to the rear of my wagon. The unit didn't support CAN steering wheel control, but that wasn't important to me. The unit sounds great with the std. Volvo speakers. Bluetooth and mirror-link worked flawlessly. I'm very happy with my $80 stereo replacement. I purchased the unit on Amazon and the installation kit on eBay.
Top

missthe122 wrote: ↑Sat Jul 18, 2020 7:41 am I have 2007 XC70. Just replaced my Volvo HU-650 stereo with a Chinese unbranded 2-din touchscreen stereo with USB, TF-card, Bluetooth, rear camera and mirror-link for Android, i-Phone. The head unit cost $50 and I bought an adapter kit with faceplate and wiring adapters for $30. Installation was easy (1/2 hour) plug-n-play. I didn't mount the rear camera yet. Still figuring out where to mount the camera and how to pull the wiring to the rear of my wagon. The unit didn't support CAN steering wheel control, but that wasn't important to me. The unit sounds great with the std. Volvo speakers. Bluetooth and mirror-link worked flawlessly. I'm very happy with my $80 stereo replacement. I purchased the unit on Amazon and the installation kit on eBay.

Thank you so much for the response! Do you happen to have links for the stuff that you bought? What you did sounds right up my alley, price wise. I'd essentially like to copy what you did.

Here is the link to the stereo installation kit: https://www.ebay.com/itm/Radio-Stereo-I ... OSw4WNc0bC~

Here is the link to the stereo head unit: https://www.amazon.com/gp/product/B07WF ... UTF8&psc=1
I assure you the stereo + Volvo speakers sound great and the eq adjust, speaker positioning, etc. is better than the stock stereo. You can add a sub-woofer if you want. There is no AM radio, only FM but that was no big loss for me. I have an Android cell phone, so I can't speak on how mirror-link would work with an iPhone, but the stereo is supposed to support both platforms.
Top

Looks like Volvo changed the radio mount in 2005, as the ebay product link above is for 2005 ... 2007 models only and will not fit your year (according to ebay). I think there were color changes, too. Not sure about the harness.

I used Crutchfield for my gear for my 06 S60 and was pleased but it was quite a bit more expensive.
Top

This is what I have: 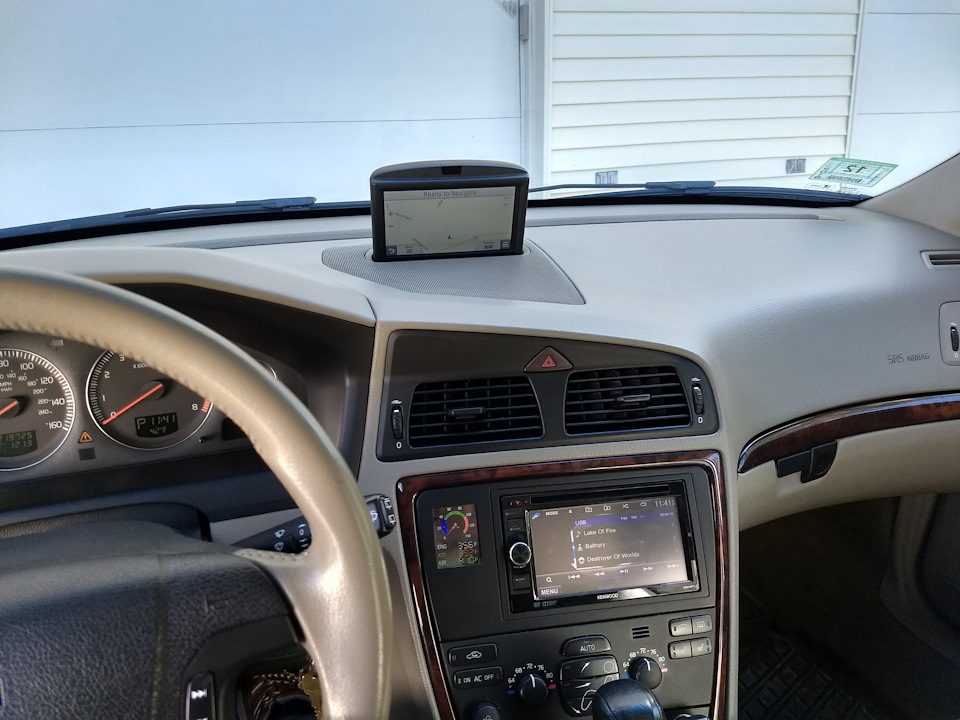 Under driver's seat: two Arduinos, one drives the display, works with CAN-bus, rear view camera, navigation. Another one controls Volvo monitors in headrest (don't remember if it was taken from 07 XC70 or some XC90...) 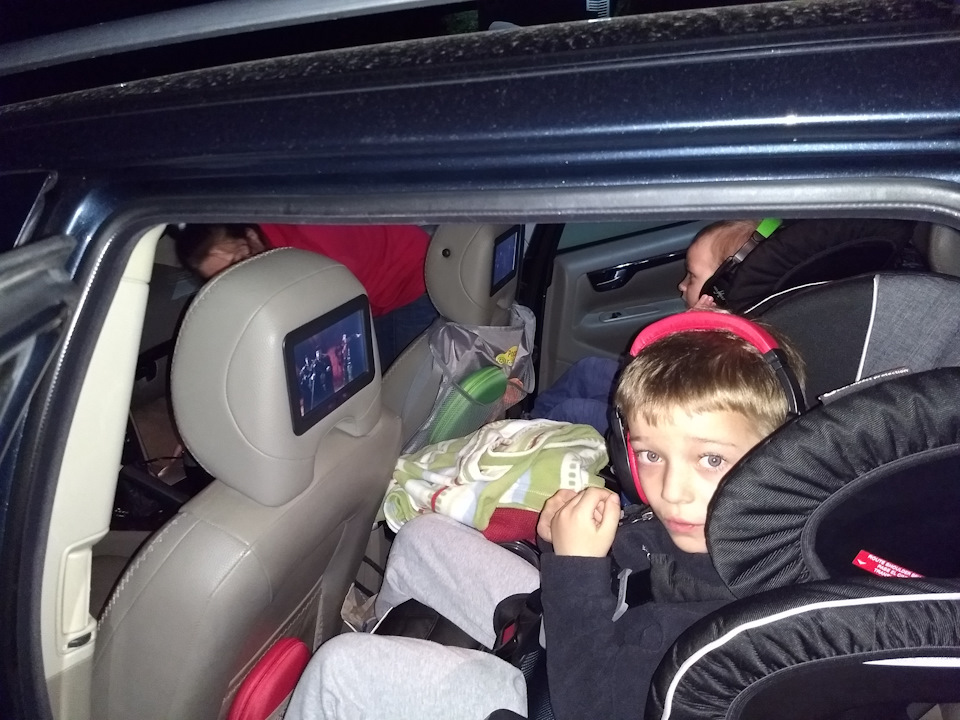 Later I got rid of navigation (Garmin does not work in Canada, Android smartphone was a junk, I remember most of local roads and don't need it on major highways), installed a central speaker + small amp for the better sound clarity. Speakers are Focal ISS/ICU 165, btw.

We've spent happy months traveling in the kid-proofed car. No whining, no fighting

Your stereo installation is truly impressive. I particularly like that display on the left side of the stereo. Mine looks a little blank after the installation. But it sounded to me like the OP wasn't planning to spend hundreds of dollars on a stereo upgrade for a 16-year old car. It seems a little broad to say "Android smartphone was a junk" when this mobile OS controls 75% of the smartphone market. Maybe you were referring to a particular smartphone model. For a little over $80, the OP can upgrade his outdated factory stereo with one that actually sounds better than factory, provides the functions of more modern stereo systems including a back-up camera and if he wants, mirror-link Waze or Google maps into the stereo. The stereo I bought also has a video output to run a rear-seat video monitor if he desires. All that functionality for a throw-away price. I guess pre-2005 stereo installation uses a different mounting scheme, but the OP asked me what I bought specifically. The link you provided will be helpful to him whichever way he chooses to proceed.

Junk as in "consumer-grade handheld device has ergonomic and reliability issues when installed in a car". Garmin was way better, but it burned out in the middle of nowhere, with the smoke filling the cabin. I mistakenly named this model "nuvi 65LMT" as TomTom, because old TomToms (like GO730) where even more ergonomic.

Aftermarket radio will not read CAN-bus and will not integrate with the car (steering wheel buttons, rear view camera on reverse, etc). I think only BluePower does.

For the sound quality alone there's a more straightforward way to improve it: original amplifier. The one built-in in HU650 is truly subpar, but people get some good results adding PA-200 or 300 to their setups. If you like the look and functionality of the stock HU...

I mentioned that the CAN steering wheel control would not work, so the OP could take this into consideration. The rear camera that comes with the stereo system works fine. It provides the wiring and all you have to do is connect the power wire to a reverse light positive. The camera comes on as soon as you put the car in reverse. You can add an external amplifier and sub-woofer to improve the sound. But compared to the original HU-650 stereo that comes with the car, the Chinese unit sounds better. Remember the OP wants to spend as little as possible and get bluetooth, USB, tf-card, AUX stereo and rear camera connectivity. You can always improve the stereo sound by spending more money, but I don't think that was what he had in mind. Personally, I've never experienced "unreliability" using my Android phone as a GPS system in the USA or Canada, but I've been told that there are problems when driving in some cities. I'm primarily a country driver so both Google maps or Waze have always gotten me where I needed to go. I'm with you on "old finest Swedish metal" with the proviso that my first V70XC (2002) had notoriously bad transmission problems which I believe was not sorted until 2006 and above. I am wary of buying a 2008 and above XC car right now, but that could change in the future. My favorite Volvo is still my 1990 760 turbo wagon which I know will run forever.
Top
Post Reply
10 posts • Page 1 of 1