Has anyone gotten into their rear suspension and changed bushings? I was changing the E-brake shoes and did some inspecting and found some bushings that look like they could warrant replacement. I see that IPD sells a complete kit with Volvo brand bushings for about $700. Has anyone dropped the rear subframe and changed all these or is it necessary to replace them all? Would it be easier to just replace the ones that are worn out selectively without pulling the whole subframe? Car has 280000kms and no unusual tire wear or tracking issues, maybe I should leave things alone??
2003 XC 70, 2007 Duramax LBZ.
Top

AT 205 re-seal for rubber suspension components. My front control arm bushings and front and rear suspension plastic and rubber components are all kind of cracked and this stuff makes them last for a while. Like 8$ or something at the auto parts store instead of $700 for a kit. But I'm a tight ass so it's your call. AT 205 re-seal in a bottle.
Top

I'm curious, how do you apply the AT-205 to the bushings and whatnot?


Rear end on my XC-70 dismantled at the moment, and like BlackLab467, I'd love to just replace all the rubber, but don't wanna pay $700 for the IPD Kit.

Paint brush and rub it in there? Soak the parts off car? Swash some, gargle, and take aim?

I don't really think that stuff would do much good to rejuvenate collapsed bushings due to rubber deterioration. There's just too much weight and pressure on some of these bushings.
I think I will instead determine which bushing are most in need of replacement and take that approach, using OEM Volvo bushings of course. It just seems to me when looking at the rear suspension that it would be almost as easy to drop the whole assemblage, rather than removing only specific components to access the bushings for replacement.
Does anyone have any recommendations for which bushings are most "high wear" in the back end?
2003 XC 70, 2007 Duramax LBZ.
Top

I just replace the rear sub-frame bushings and was told to leave the rest of them alone. The mechanic specializes in these cars and indicated that the rear bushing last much longer than the front bushings (even on the X/C model's like ours). I replaced all the front bushings including the sub frame.
Manic Mike
Top

Careful with what you replace out back, keep it to a minimum.. I replaced the upper and lower control arm bushings with polys because the originals had play in them and the mechanic wouldn't pass inspection - the car is now dangerous to drive, the rear is side-hoping like crazy and getting a really bad inner-tire wear despite being aligned 3 times. Next step is to replace the 'trailing' arm bushing located at the subframe as they also have a bit of play in them. The polys created problems where I didn't have any before.
Top

Yeah, I would never use the poly bushings. I did the whole front end and subframe and LCA bushings with OEM Volvo parts, that's what our cars were designed and engineered for. Maybe I'll figure out specifically which ones need replacing and only do those. Thanks.
2003 XC 70, 2007 Duramax LBZ.
Top

I’d start off with the trailing arm bushings and see how you like that improvement first. Replacing most of the rest back there will require an entire rear subframe removal.
A word to the wise - get a couple different length metal blades for your sawzall & cut slots in the original bushings before trying to press them out. Much less aggravating & time consuming.

A complete rear coil, shock, and mount overhaul will add support to aging subframe, unless the bushings on subframe are falling off -- more here viewtopic.php?f=9&t=91242 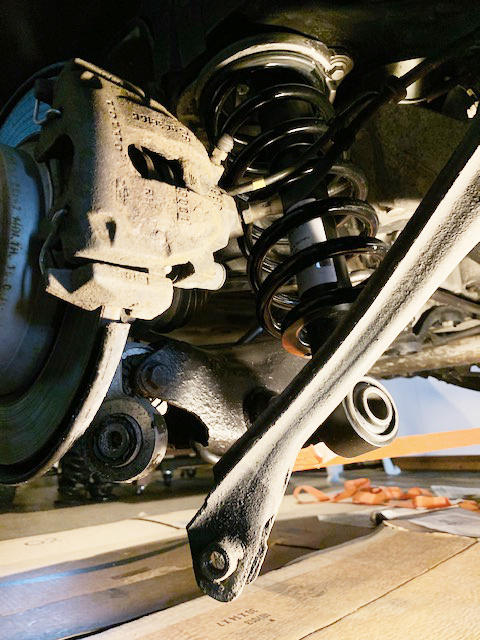