Broken Volvo? Out of work?
Did you know? 🤔
Logged in users can get email notification of topic replies Log in or register (free).
Amazon Link Buy anything with this and it helps MVS!

Who has added chassis stiffening bracing to their Volvo?
What did you add and where did you get it?
Did it make a difference for you?
I added a cheap aluminum upper strut bar to my S70 years ago.
A few weeks ago, I bought an Ultra Racing Strut bar for my S40 and ordered a lower middle brace for it last night. We'll see how that goes! 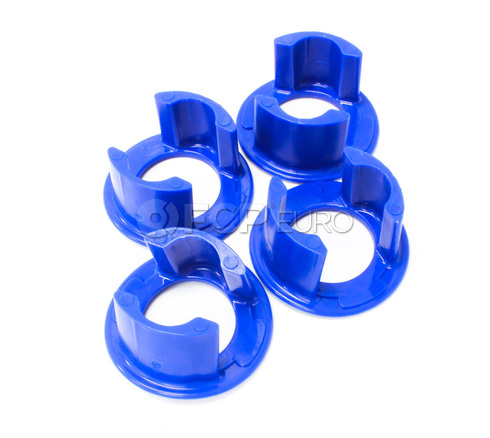 I'm also currently looking at the engine mount additions- adding the poly pieces that insert into the 4 subframe bushings (fits 850's and 70 series or P80's as well as our P2 cars). FCP offers these for much cheaper than IPD.

...and the P2 car poly bushing inserts on the upper engine torque mount cross bar... I guess that's what you call it.
FCP offers the same thing IPD does for cheaper too... There is also a hard piece that replaces the actual mount on the P2's... We have them on our '04 V70. IPD's are about $100 a pair but there are look-alike alternatives. Don't know how they stack up but since they are solid, I don't see that there would be that much difference. We like them but also don't like the vibrations they create at about 3000 rpm's. I thought FCP would have these but I don't see them on their website. Instead, eeuroparts has these:

Let me add- to get the subframe poly inserts in, IPD shows that you need a lube. The other places don't sell lube specific for this but apparently IPD sends you some with their kit. They say a lube called Aqualube is what you need. Does anyone know where else you can get this- what it really is? It's the same lube they include with their sway bar kits.
'98 S70 T5 Emrld Grn Met/Beige Tons of Upgrades Mobil-1
'04 V70 2.5T Red/Taupe Some Upgrades Mobil-1
'07 S40 T5 AWD 6 speed manual! Silver/Black Stage1 Heico & Elevate
'07 S60 2.5T Blue/Taupe- my kid's Volvo
Top

Been tempted to make a rear shock and chassis brace for the wagon. No time to get to those volition of parts.
The lube is basically a non petroleum based lubricant.. I hope.

I just bought the bushing insert kit from FCP for quite a savings compared to IPD. I also sprung for their Motul lubricant. One rater said he used it on all of his poly bushings. I think I'm good to go on this.

In the meantime, I'm chassis bracing my S40 like crazy...
1. upper strut mount brace
2. lower mid brace (behind the engine area under the car)
3. Beefier rear sway bar
4. MOOG rear endlinks that have grease fittings!
Once done I will really feel like I'm on rails (at least that's the idea)!!

Oh, and my son said he didn't want anything to tighten up the strut (by way of mount pieces) for his engine torque mount- says that's the way it's suppose to be. I guess if he's happy then I am too!

Aqualube is water based personal lubricant.

Or marine bearing grease from Kentucky, I guess... But that wouldn't be water based, so I'm thinking it's the first one.

LOL....back to the discussion, I have added Ultra Racing strut tower brace to the front, a mid-chassis brace right at the rear 2 engine cradle (subframe) bolts to the car frame and a very large 27mm rear sway bar (from Racing Beat- it was designed for Mazda 3's) w/ heavy duty end links on my '07 S40 AWD Manual T5...the difference before and after is night and day! The car already has Elevate tuning and Heico dual exhuast and sports suspension and I changed out the stock lower transmission torque mount to an E-Focus mount which is much sturdier. Here is a picture of the rear sway after I got it in today.

Update: I took out the mid-chassis brace. I hit every speed bump and some very hard. It was bent after my escapades with it but a guy in Ky wanted it so off it went. Maybe his car isn't as lowered as mine and he'll have better luck. To be honest, I didn't feel a whole lot of difference on the road with it out so I guess it was sort of over-shooting things on this car. On the other hand, I'm happy with my other upgrades!
'98 S70 T5 Emrld Grn Met/Beige Tons of Upgrades Mobil-1
'04 V70 2.5T Red/Taupe Some Upgrades Mobil-1
'07 S40 T5 AWD 6 speed manual! Silver/Black Stage1 Heico & Elevate
'07 S60 2.5T Blue/Taupe- my kid's Volvo
Top
Post Reply