Help, Advice, Owners' Discussion and DIY Tutorials on the Volvo S80 model. Sometimes called an "executive car", the S80 was and continues to be Volvo's top-of-the-line passenger car.
Post Reply

I am intending to make all the mounts in the S80 T6 into Hybrid Mounts of Rubber and Poly. This in hope of getting the best of all three worlds, firmness without vibration and longevity. Below is what led to wanting to build a better mouse trap besides how I intend to accomplish this with pictures. I am hoping for feedback before using the Poly for the build. Thanks.

I have been doing DIY alignments since the mid 90's. Can't remember the last time any of the cars have been on a rack. Rarely have any feathering or uneven wear. Recently did one on the T6 and the steering is now centered and drives straight on the freeway for some distance without hands on the steering on a fairly flat road. It will wander slowly as the road begins to pitch. Toe is probably 1/16 inch toed in and the tires are almost new.

There is however a slight pulled of the steering to the left for a split second when moving from a stop. I suspect it could be the lower control arm bushing as most the mounts except the transmission torque mount looks pretty good. It could potentially be the sub-frames bushings also. The thought of removing the bolts on the driver's side control arm front bushing just wasn't appetizing as the Trans-Pan is almost next to it. Seems like you have to jack the engine up a little to get to it. I thought of what I can do to maybe insert some spacers into the bushing in case the rubber was not torn, if indeed it was the bushing.

Anyway, the car runs quiet and the transmission still shifts excellent after the Trango-Shift Kit so I thought I might stiffen the chassis some, hopefully without the penalty of interior vibration while eliminating the torque steer for lack of a better term. Besides wanting to eliminate the torque steer I was curious how stiffening each mount would affect the handling instead of just replacing everything at once.

After some research I decided I didn't want to go with the Poly in fear it does cause vibration. Didn't want to take a chance of having a bunch of new parts I can't use just sitting around. After Youtubing I found several people using Poly Sealants as a cheap DIY either to make their own or to repair various types of mounts. Please see video link.

The two common products used are the following:

I plan on starting at the top and later to the torque mount, sub-frame bushings, control arms and lastly front engine mount. Everything will be cleaned de-greased and sanded where possible for adhesion. The Upper Mount inserts are shorter allowing for a greater amount of Poly while the bottom will provide a connection for the inner and outer poly. The white PVC Cap (Home Depot) was trimmed in two spots so it can be centered on the mount. Doing one side at a time for better curing.

Upper Engine Mount - Saw IPD selling inserts for their Poly Mount so came up with this before applying the Poly to the entire cavity. This alone would add longevity to the mount.

-
If you want to try this and think the hoses might slip out just use a zip tie around each or a little Poly Sealant.
-

-
Strut Bar Mount I discovered I couldn't use the IPD Poly Inserts as one is solid on the bottom. Will try using the middle washer to tie it solid to the Strut Bar and hopefully the extra Poly will absorb some of the vibration. If not the center washer will be remove to allow a little more flex. Regardless both will receive the Poly treatment including what little I could put on to the top of the mount.

-
Strut Bar Mount Lastly, the strut bar mount. This is a solid mount but if you hit it with a dead blow hammer you'll see it shift some what easy from side to side so Poly will be added and smooth out with the finger around the bar and washer.

-
-
I will apply a thin coat of dielectric grease on the the PVC cap and washers in hope it can be removed easier after everything cures. Read somewhere that Volvo should have used a slightly larger bolt or have smaller holes so the bolts don't bounce around. During installation the bolts will be coated with Poly to fill the gaps and provide some vibration and dampening properties. Let me know what you think whether good, bad or improvements. Thanks.
-
Blessings,

Thanks. I will Guinea Pig the torque mount and sub-frame bushings shortly.
Blessings,

Thanks. I will Guinea Pig the torque mount and sub-frame bushings shortly.


.
Long Term Use: Oozed over time as the roofing material never cured. Can work if one can find the appropriate goop, use metal, plastic rods or even fat glue gun sticks, much like filling the sub frame with bushings.
.

I just remembered that this is a tried & tested mod in Renault Clio land (I owned a Clio RS Phase 1 in the past). The last exhaust mount is such a bad design that is breaks within very short time. 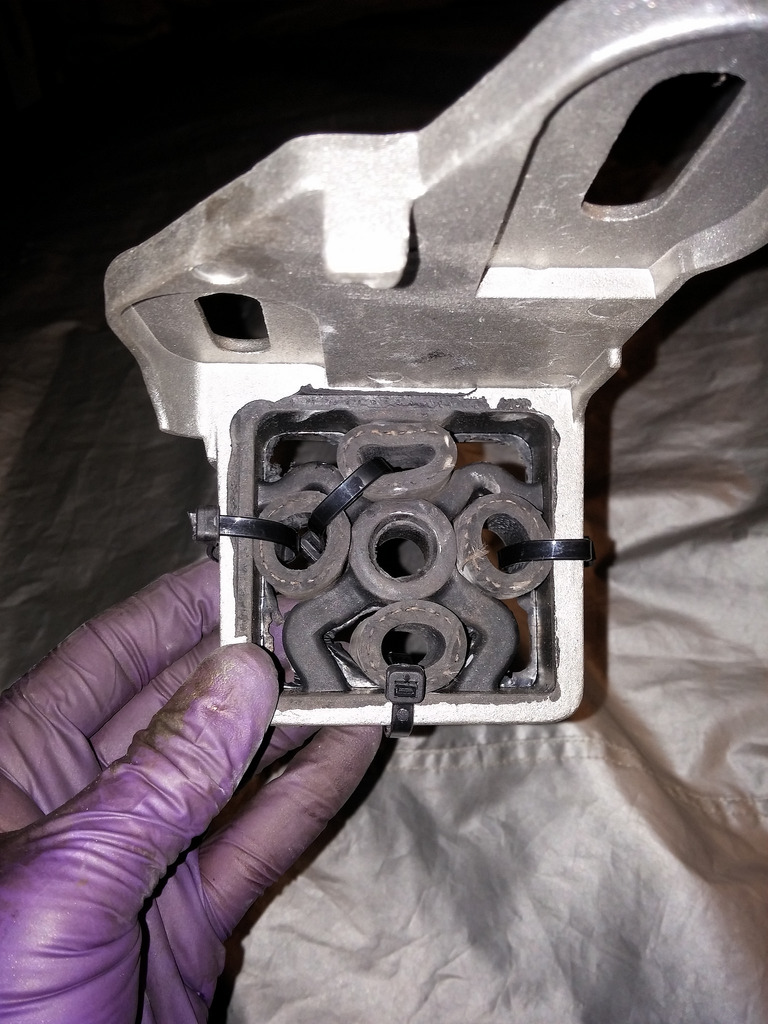 Powerflex made a bushing for this shortcoming 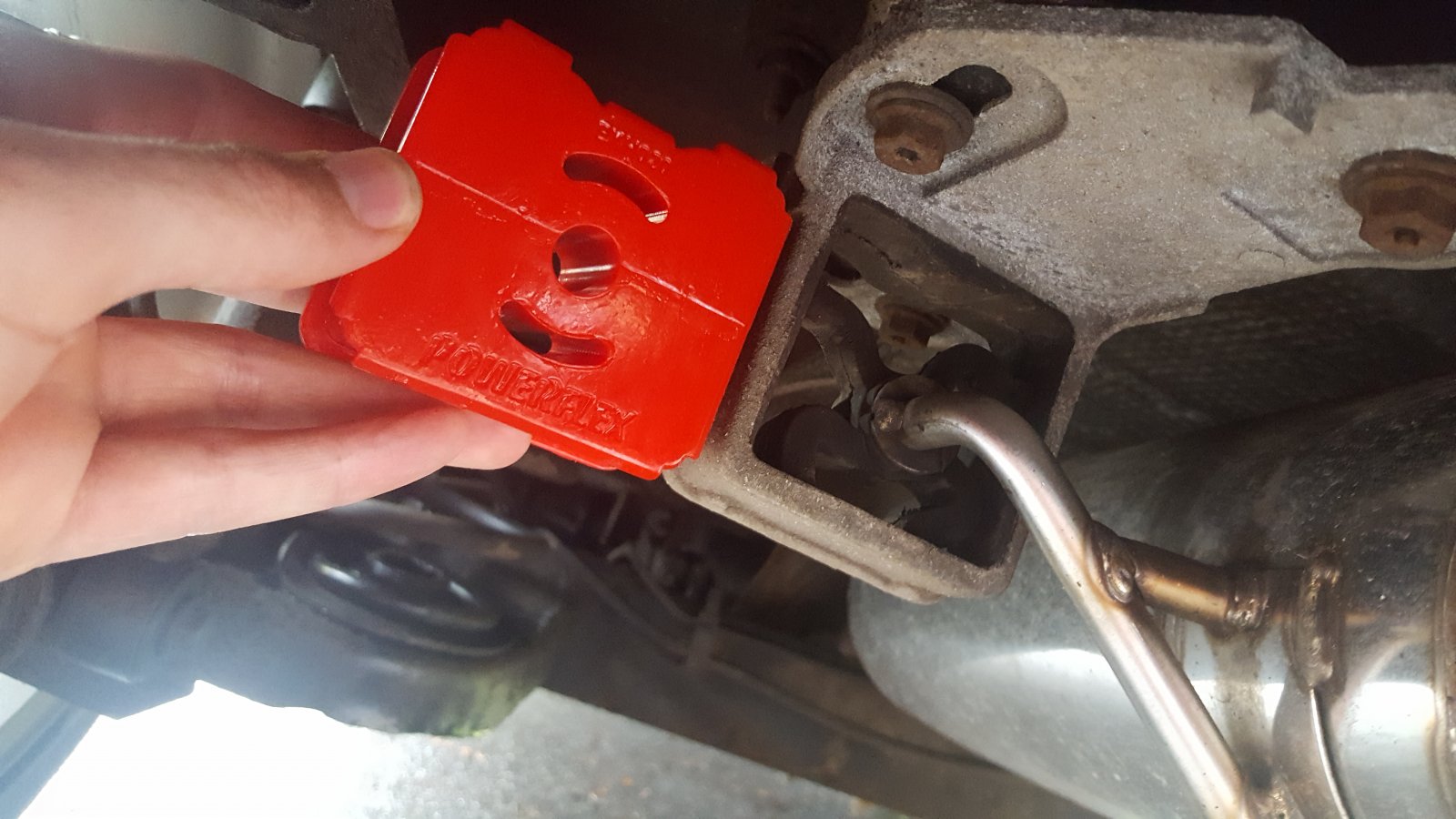 The last exhaust mount is such a bad design that is breaks within very short time.

Powerflex made a bushing for this shortcoming


.
So there is nothing new under the sun. Heat doesn't help on such a small amount of rubber. So you do have small Asian hands