I checked prices on a gear position sensor and found they sell for about $120. I suspected they were nothing more than a sophisticated switch..no electronics. The connector was difficult to impossible to unhook. I decided to take it apart in place since it was held together with about 5 screws. It was an easy fix.

The construction of the switch is such that it has three tracks of contacts that send various signals to the computer to specify what gear the transmission is in.

The idea that the contacts could be dirty or worn sounded like a simple enough thing to fix. As the pictures show, it was simple enough.

One picture (out of focus) shows a dirty contact..the worst of the 3. None of the three contacts were burned…just dirty. There are three copper contacts that are springloaded and mounted on a moveable arm. They simply slide along 3 separate tracks of contacts which themselves can become corroded. My symptoms were intermittent. This indicated poor contact reliability as I found.

Resolution: Dismantle the unit (being careful not to lose the 3 copper spring-loaded contacts. Use very fine sandpaper to clean up the flat ends of the copy contacts and to run along the three tracks to clean and brighten the tracks they’ll slide against. I used alcohol to clean up any residue. I then smeared some grease that was on the body of the switch to re-lube the tracks and contacts.

I then reassembled..no need to readjust anything. Just put it back exactly lined up the way I found it. Worked like a charm. See photos attached.

Difficulties I found: The left mount of the gear position sensor also holds the transmission dipstick holder and was a royal pain to remove and replace. Suggest leaving the dipstick itself in place inside the holder so as to make it easier to remount the dipstick guide/holder when it’s time to reinstall. You simply can’t see well in that area. The rest is just normal mechanical issues and being careful not to lose small parts. 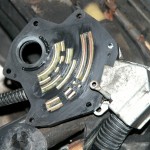 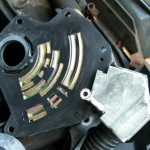 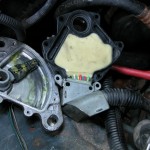 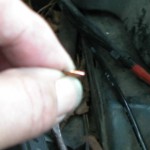 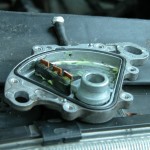 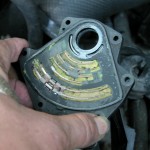 What where your syptoms .. mine stays sometimes in first gear and sometimes in 3rd… look forward to your reply .. or by anyone else

Hey I managed to clean out my transmission position sensor last night, reassembled and it seems to work – however I still have the flashing orange arrow, but no longer limp mode. Having had the battery off during the fix I would have thought any codes would have dropped by now? Any tips on clearing the orange arrow or do I still maybe have problems in there?

Thanks in advance
Matt C

THAX SO MUCH THIS HAS GIVEN ME A CLUE ON WHAT TO DO,GOD BLESS U

there are no pictues where arre the pictures? I must be missing something

Thank You Larry!
This is great stuff. I especially appreciate the pictures.
My Volvo 850 1996 has been standing for a few days due to limp home of the transmission. I first though that it might be a wiring problem or that any of the sensors or solenoids inside the transmission might be the problem.
However, after removing the TCM and measuring with an ohm-meter I could conclude that all sensors and solenoids were OK. But when measuring the inputs from the Gear Position Sensor for each gear selector position I could see fluctuating resistance in two of the signals – which indicates bad contact/corrosion. So, I will try doing the same stunt as you did. I’m sure your info and pictures here will save me a lot of time.
THANKS!

Hey, I brought my car in to the dealership and they said my my gear shift position sensor was giving a faulty signal. I need to replace it can you tell me how to do that….step by step preferably.

No, the springs appeared to be strong enough, but I think it might have made it a longer lasting fix to spread them. When I saw the slightly burnt or dirty markings on one or two of the moveable contacts, I figured that cleaning them up would do the trick…and it seems to have worked fine.

I felt it was a simpler job than replacing the complete unit since the old unit was properly adjusted and could be put right back the way it came off.

Thanks for this info! Glad you were able to do this in the car- sounds like a fairly simple fix for those with this issue. Just curious if you spread any springs apart to make the contacts stronger?