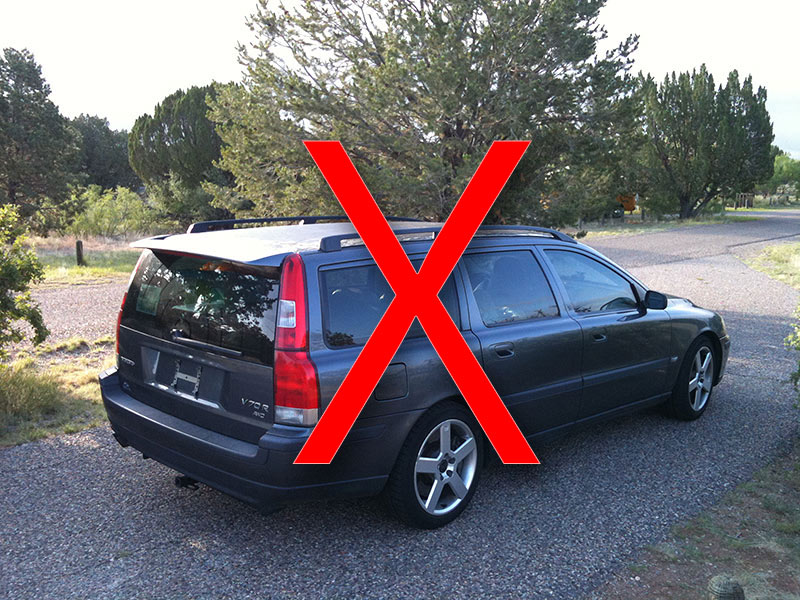 V70 R is totalled by Allstate insurance company after minor collision. All in all, a nice car. Would I get another? Yes, but a manual. In fact, this is probably the time to buy one, while there are still enough good samples (read: not modded, abused, etc.) with low-middle miles on them.

I love our R. I have few complaints. Going with an ’05 or newer is wise because the Four C suspension was improved, according to JRL in the Volvo Forum. Auto transmission is improved in ’06, so like any car model, they tend to get better the newer you buy.

The R wagons do not self-level, so with lots of family/luggage it’ll sag in the back and the wheels will ‘lean’ in. This might be something to think about if you’re going to put 2k miles on a long roadtrip for instance — inside rear tire wear.

No major problems so far. I replaced control arm bushings at 95k miles, along with spring seats — with the good OEM XC90 ones. The struts are still good at 107k miles. The Four-C Monroes are very expensive, $451.21 for one front strut at IPD, so I’m dreading the day she needs new absorbers. Dreading.

With the baby seat behind the front passenger, there’s not as much legroom as I’d hoped in front passenger. That’s solved by me doing the driving. I still dislike the radio controls compared to the SC-816 radio in my 850, but appreciate the steering wheel radio controls, something no 850 ever had.

It eats a little more engine oil than my ’97 850 T5, but it’s still well within normal range. There is a nagging information center message to alert you to this “Oil Level Low”. I find it’s a little too eager, meaning the dipstick shows low-acceptable when this message appears.

Buying a P2 V70 R? Do all the fluids/filters when you get one if they haven’t been done/documented recently. This can get expensive, so beware. Expect to pay $1500-ish to have this done, taxes and consumables included.

That reminds me, time for timing belt.

Amazing in snow with new tires, like I said above. I bought a set of 235/45ZR -17 Continental ExtremeContact DWS. The cornering is amazing in Advanced suspension setting on dry pavement.

It was dealer maintained up to 50k miles, and between 50k and 89k owned by a guy who was not quite a “car nut”, but was certainly more concientious than the average car owner. He used Amsoil products (fluids) in her.

Within 10 days of buying it I had an every-fluid replacement service done at Volvo Specialists here in Denver, what they call a “90k Old School Service”: Front and rear diffs + Haldex + Engine oil + Trans fluid + Coolant + Brake fluid.

[…] couple days after the tires arrived, I took my V70 R to Volvo Specialists and had them balance and mount the tires, making sure they had room for […]

Hello everybody! I am Portuguese and i have 2004 V70R model, that I love it!
Wonderfull car. I bought in new!
Well, my car has a few problem in the front lights. When I light on the xenon, the system put tle lights down, with a few range light, white a follow mesage apears in the display: “visit assistant service”.
The Portuguese Volvo Service says me that is necessary to replace the front light conjunt, wicht is too expensive.
Anyone hás a diferent idea or solution?
Thank you so much!
Best regards,
Francisco