Is The Four is Faster Than the Eight ? 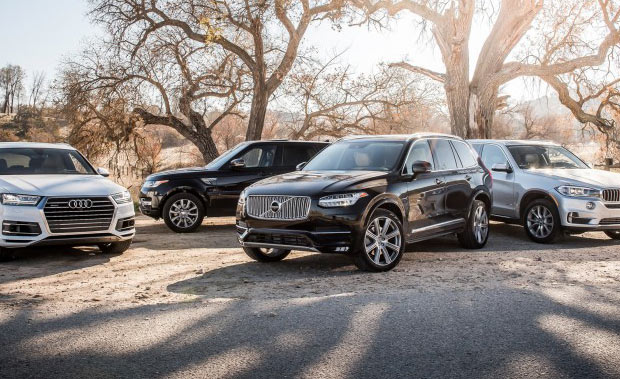 I’m writing this post because it’s very rare that a Volvo has the attention of the wider auto enthusiast imagination. I’ve been waiting for 15 years for this, and now with the new XC90, S90, V90 (I just automatically typed “V70” there out of habit and had to correct it) and recent Polestar models, I have something to get excited about. It’s been so, so long. This is a great time to be a Volvo fan. And to think Volvo’s turnaround came from China? Whatever, I digress…

The bulk of this post is made up of Car & Driver reader comments taken from the comments (“Backfires”) section of this 4-way SUV test: Volvo XC90 vs. BMW X5 vs. Audi Q7 vs. Land Rover Range Rover. For various reasons, it boiled down to the Audi vs. the Volvo, in the comments anyway.

Of note, almost unanimously, the XC90 was given the nod for good looks. I agree with this. Also, it wins on price over the others. Also note that much of the commenting was about the XC90, despite there being four SUVs in the test. Whatever the case, here are the comments, of the roughly 200, from that C&D story I thought were notable:

^ Very telling, very insightful. Probably the most important point in the comments. The four is faster than the eight.

In my drive of the XC90 I didn’t get the impression that it was straining to move me as quickly as I wanted to go.

A 6-second sprint to 60 in a three-row SUV is pretty darn quick, and just a hair behind the others. I’ll be interested to see how it feels in action.

C&D placed a Volvo above a BMW? Never thought I’d see the day… Kudos to Vovlo!

I wonder why Volvo insists on not extending that 4 into a 5 or 6. It would remain modular and would more than likely fit inside the 90

The 3rd row in the Volvo was comfortable enough for a regular use seat. My daughter loved it back there. I even fit in the 3rd row on the Volvo, I’m 6’3″. I tried the Audi, no-go, I couldn’t even fit my legs and was unable to move the 2nd row back into position. Accessing the 3rd row is much easier in the Volvo than the Audi as well. I don’t know where C&D got their numbers (cough Audi) but I’d say they are not accurate. I have no clue how C&D rated them nearly the same. Check them out for yourself, it’s not even close to similar size & space.