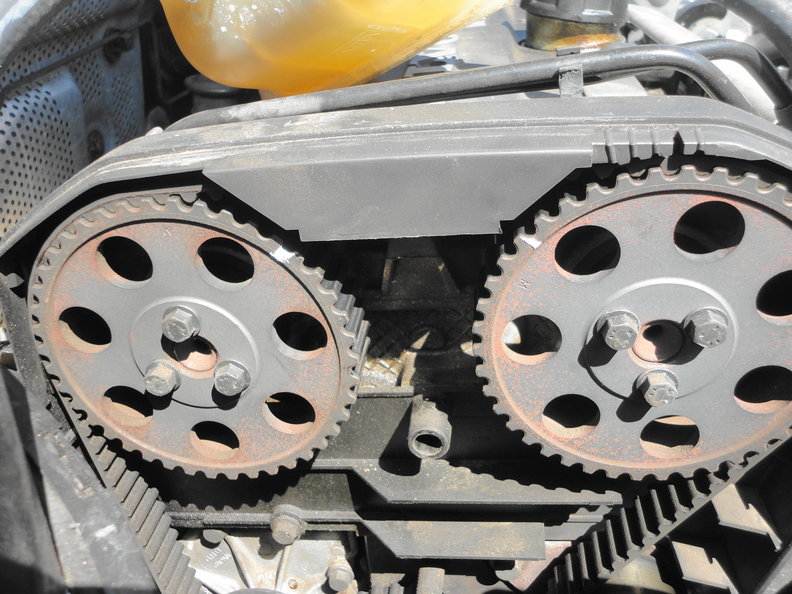 Changing the timing belt, where to begin?

Maintenance is the key to a car’s long life and changing the timing belt is one task that you eventually will have to perform.
With automotive engines as with many aspects of daily life, timing is critical. One vehicle component often overlooked during routine maintenance is the engine and changing timing belt. If it fails, the engine will stop and the car will coast to a stop. The lucky motorist will only have the inconvenience of being stranded on the side of the road until the car can be towed to a repair facility to have the timing belt replaced. On the other hand, the engine might suffer severe, if not catastrophic, damage to its internal components.

This potential disaster can be avoided easily and relatively inexpensively by changing the timing belt within the required replacement interval.

serpentine belt in appearance, only they typically have square teeth on the inside surface. They usually are constructed of rubber reinforced with nylon. The timing belt transfers the rotation of the crankshaft to the camshaft. The rotating camshaft activates the valves, which provide air and fuel to the cylinders and expel combustion gases to the exhaust system.

the only thing that’s a real PITA is getting the timing belt off of the crankshaft pulley and getting the new one back on, as there’s a tight squeeze. also, keeping tension on the crankshaft pulley while positioning the belt on the intake cam is a must (belt kept slipping off of the crankshaft pulley when tensioned, and took me about 6 tries before i was comfortable with the tension on it.) if there’s ANY slack in the right side of the belt between the crankshaft and intake cam pulley, start over! edited to add: i’d read that somebody had done the t-belt without removing the spark plugs. i got tricked into thinking i’d screwed up when i hand-cranked the engine. once compression kicked in i felt some resistance, and stopped there, i thought maybe i’d run into the valve/piston interference. after removing the plugs it turned over with no resistance at all. removing the plugs, as simple as it is, is a good idea.

sticker on the cover noted 71k/1999, and it’s now 2005 and i’m at 151k. although there’s no record of the t-belt being changed between then and now, it doesn’t look like it’s 6 years old or has 80k on it- but it was a Volvo belt, and i imagine a dealer would have put a sticker on if it’d been replaced at another interval.

anyway- my conscience will feel much better now. whew!val.

The trick with the timing belt is hidden in Haynes.
You need to raise the engine to get some working room then feed it backward over that obnoxious stud that is directly underneath and behind the Crankshaft pulley. Then give the belt a pull from above the engine.

My challenge was I couldn’t arrange enough room for the horse collar bushing with everything installed as per the instructions. I am trusting that it’ll work without it — of course it worked for who know how long with a frozen tensioner so all is good.

Notes on Changing the Timing Belt

just wondering on how to change the timing belt on a volvo 960 3.0L
And how to set the timing because there is only 4 bolts on the hymonica pully and nothing for the crank shaft pulley
Much assistance needed.