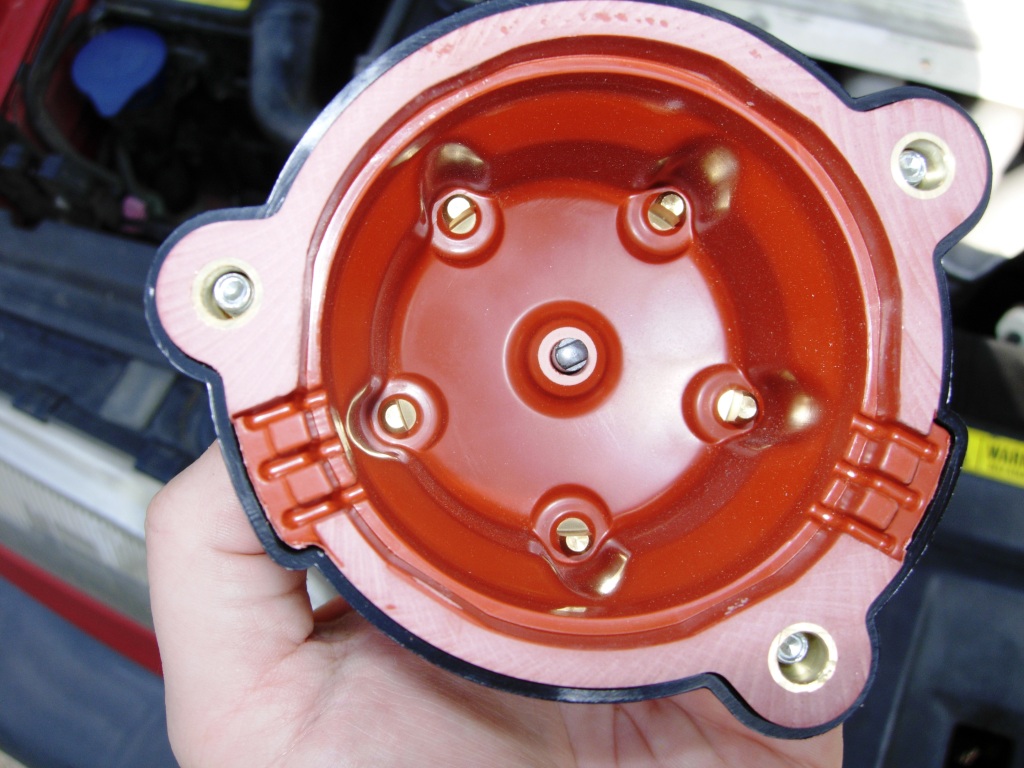 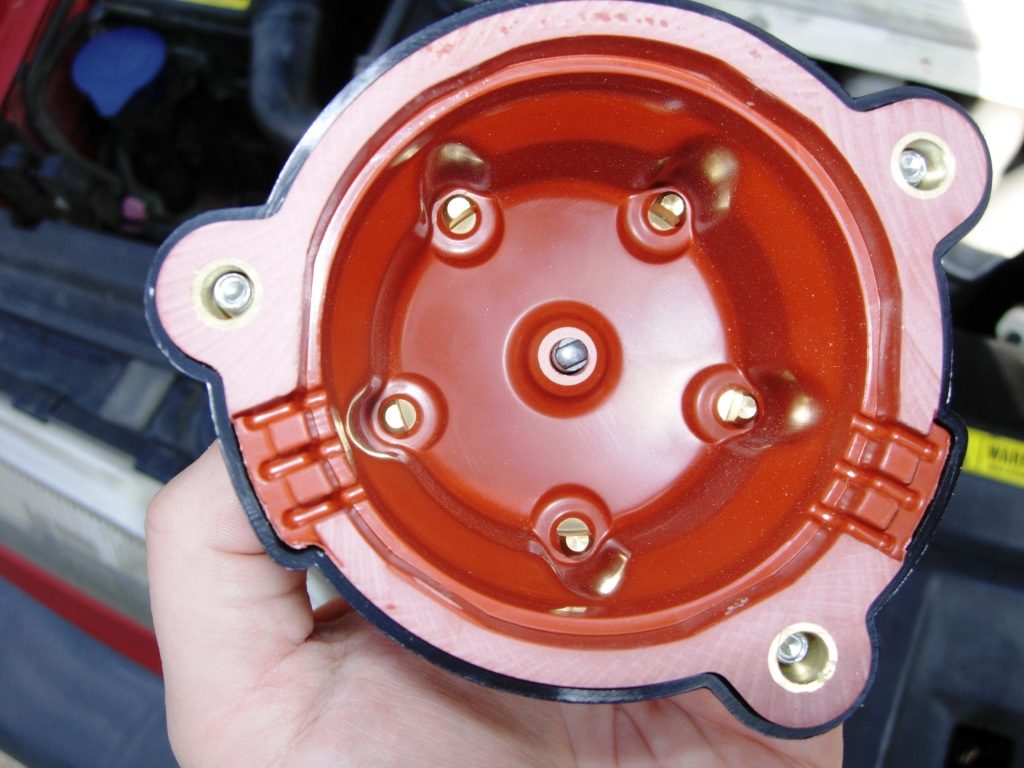 Overview: How to change the distributor cap and rotor on a 1997 Volvo 850 GLT.

This job requires removal of the battery and then the bottom half of the air filter box in order to reach the bottom screw on the distributor cap. Including taking the photos, the whole job of removal and replacement took 2 hours (first time).

1) Common tools: a standard screwdriver for the distributor cap screws and a wrench or socket to disconnect the battery terminals. 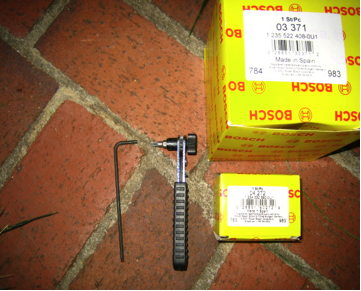 2) Remove the battery. (Note you will have to re-type the code for your radio after reconnecting the battery.) 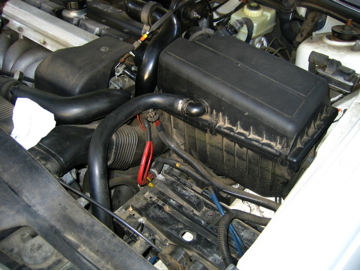 3) Disconnect and remove the flexible air intake tube, seen above. This tube attaches to the bottom half of the airbox and the front of the car near the radiators. It doesn’t have clamps (at least mine doesn’t).

it just pulls off at each end.

4) Disconnect the ignition wire running from the coil to the distributor cap. It is held by two clamps built into the airbox. This will allow the airbox top to be lifted up and out of the way. The wire can be seen in the picture below. 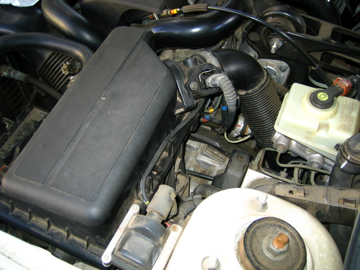 5) Disconnect and remove the two Torx screws holding the vacuum switch to the side of the airbox nearest the distributor cap. It’s a tight fit. Note: there is no need to disconnect the three vacuum hoses from the switch. The picture below is taken from directly above and shows a slim ratchet in place for loosening the two Torx screws. 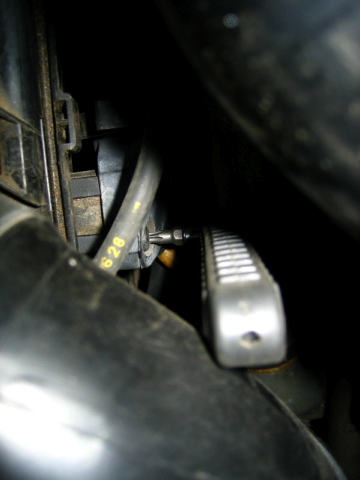 6) The picture below shows the vacuum switch after unscrewing and removing the two Torx screws. In this picture the electrical cable was disconnected (connector visible at bottom), but after doing the job I realize that it was not necessary. 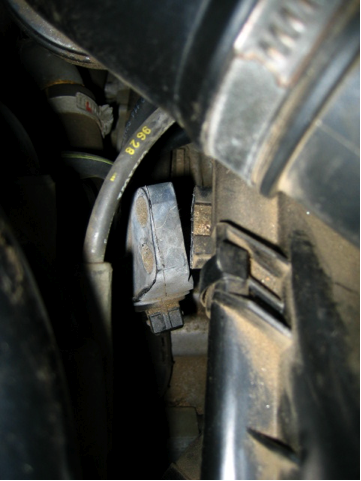 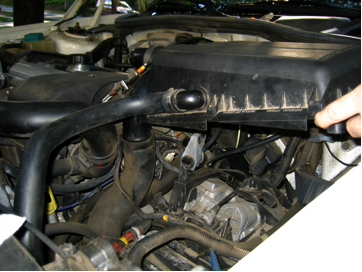 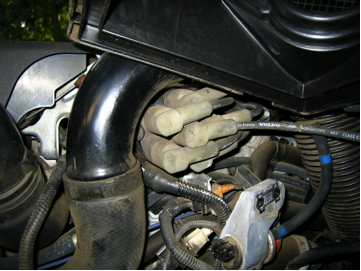 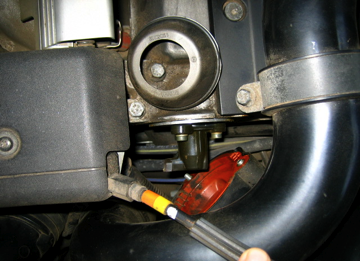 10) Unscrew the three bolts with a 3mm hex key. After removal, the distributor will look as shown below. Install a new rotor. There is a built-in alignment notch to guide the new rotor into the correct rotary position. 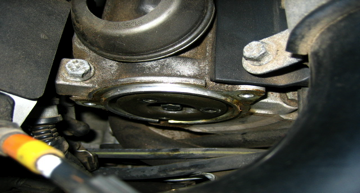 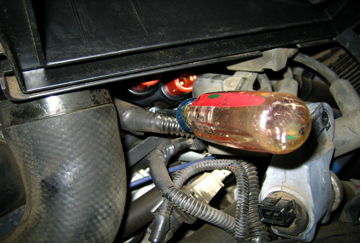 12) Reattach the ignition wires in the correct order.

16) Reattach the coil ignition wire to the top of the airbox.

Parts inspection: After doing the job I took a closer look at my old cap and rotor. The date of the rotor was stamped up inside the shaft… it said 96 (my car is a ‘

97 with 113K miles). I figure these are the original cap and rotor. The engine had no misfiring or ignition symptoms, but I figured it was prudent to change these parts.

Cap: Heavy build up on the five edge contacts. Some deposits on the sidewall of the cap. No cracks in the sidewall. 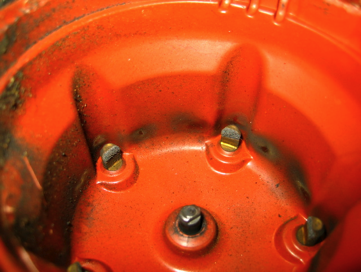 Rotor: some peeling and flaking of the epoxy around the edges of the tip. Some deposits on the metal. 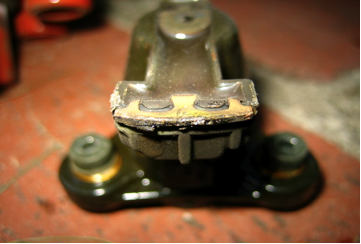