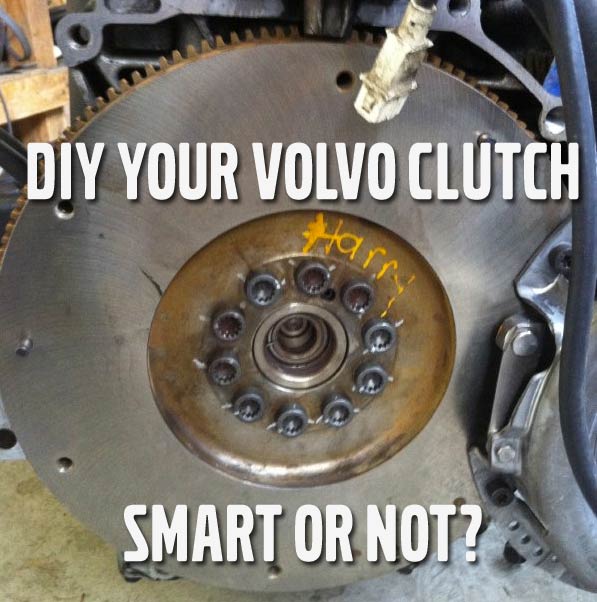 How hard of a job is an S60 clutch replacement? MVS Moderator abscate, and MVS Contributors tryingbe and kcodyjr go into detail on what to buy, what tools you need, and a general summary of the work involved. They give a good account of the scope and cost of replacing the clutch on a modern, front-wheel-drive Volvo (1990s-2000s).

Transmission has to come out. You will need working space, jack, jack stands, tools of course.

The clutch parts on this car arent cheap – and don’t forget to do the rear main seal on the engine while you have the transmission out.

Stop. Judging from this sentence I have a huge suspicion you have no idea what you’re getting yourself into. Plus, I’m getting the vibe that you do not have all the necessary tools, skill, time, knowledge, & know how to do this job. If you do attempt this, you will be out of thousands of dollar and probably still doesn’t have a working car at the end. Clutch change is one of the biggest job a home mechanic can take on, next to engine replacement. I would strongly suggest you get a loan to pay a mechanic or sell it as-is.

Clutch is between the engine and transmission. For me, doing the job with an engine hoist but no car lift, I find it easier to have both the engine and trans out as one piece and change the flywheel, clutch, pressure plate, real main seal, throw out bearing, slave cylinder, input shaft seal for the transmission outside the car, then rejoin the trans and engine before putting them back to the car. Your car came with a dual mass flywheel. It is a one time use flywheel, it can not be machine, and it will not last another cycle. It has to be changed and itself is $600-$800.

+1, if you have to ask these questions, you don’t want to get into it, at least not under the gun like this.

People who do this job themselves have tools, some degree of developed skills, and time. You’re going to spend more getting equipped than you’d save.

+1 that your best move is to seek financing to have a local indy do the job. A clutch isn’t a reason, by itself, to give up on a car.