I posted earlier asking about recommended speaker sizes to replace the blown speakers in my daughter’s S70 and the response was pretty much crickets. I had to make a couple of trips to the local Pick & Pull for some other parts so I tried to pull the speakers from a donor S70 while I was there but they were rotted as well. The foam on the edges of the cones had basically turned to dust on all of them in the lot. I pulled a speaker for each door and a rear deck speaker anyway, I think the Pick & Pull just gave them to me or charged very little for them since they were bad anyway and I was buying a bunch of other stuff. I figured having them would let me experiment on fitting other speakers into the frames. 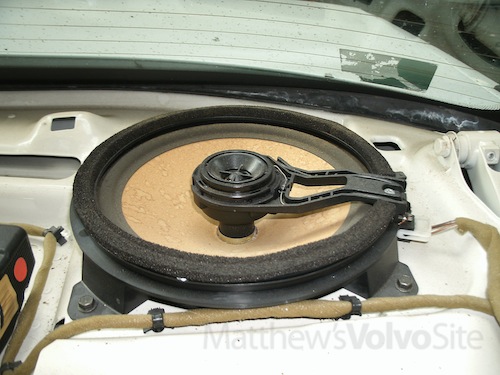 The rear deck speakers are 8 inch and have a proprietary mounting frame. The timing was just right and we had a fellow MVS member that had a set of 8 inch Blaupunkt speakers for sale in the classified section. His price was fair and I bought them from him.

To access the rear deck speakers you need to remove the cover from the rear deck. It is held in place with two plastic door panel retainer clips in the front and there are some tabs molded into the rear of the panel that mate up with slots cut into the rear deck. To remove the panel I first folded the rear seats down. From there I removed the rear seat side bolsters. The bolsters just snap into place with a single mounting loop and pulling them outward about ¼ of the way down from the top will release them. So as to not stress them, I also removed the trim rings for the seat belts.

Removing the panel is fairly straight forward, just lift it upward to release the panel pins. The two pins are located just in front of the rear speakers. Once the pins release the panel can be further lifted and slightly bowed upward in the center to clear the trim around the rear window. Once the window trim is cleared just pull forward and the panel will be free. Without removing the seat belts the panel won’t come entirely free from the car but you can move it sufficiently to get easy access to the speakers.

There are speaker rebuild kits.

Hello depending on how astute you are at making speaker repairs you could always try ebay for new foam speaker rings. They would be a cheap fix with minimal work of gluing the new rings in place aslong as the cones and coils are still good and have not been over extended.
Hope this helps you.