This is for the first generation S80 cars that use the GM 4T65E automatic transmission.

Start by chocking the wheels and jacking up the front of the car. Position the jackstands to prevent the car from falling on you while you are working. 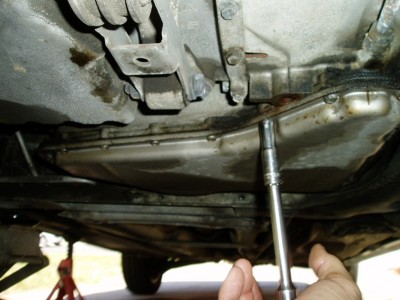 Bonus! More on the Volvo S80

The Volvo S80 is an executive car produced by the Swedish manufacturer Volvo Cars from 1998 to 2016 across two generations. It took the place of the rear-wheel-drive S90 as Volvo’s flagship sedan.

The first generation (1998–2006) was made available for the 1999 model year. It has since been built at the Torslanda Works in Gothenburg, Sweden, with a few 1999 model year cars for the North American market built at Volvo’s Halifax Assembly plant. Unlike most Volvo models, it did not have a station wagon version for its first generation.

The second generation (2006–2016) was released in 2006 as a model year 2007 car. It has an estate version, the third generation of the Volvo V70. In June 2007, the S80 scored the highest “good” rating in the Insurance Institute for Highway Safety (IIHS) crash test performance for frontal, side, and rear impacts, earning it the IIHS Top Safety Pick.

The model was replaced by the second generation S90 in the later half of 2016.