A look back at Polestar’s 20 year history

With Polestar announcing their very first production vehicle – an incredible 600HP hybrid coupe – in 2017, we got to wondering. How did this once-time Volvo racing team end up as a high performance manufacturer under their own brand? Is there Polestar history?

Oh yes, there is Polestar history. But it didn’t happen overnight. Polestar’s been around since the mid-90s, working with Volvo from the get-go. But before we get into all that, what exactly is Polestar anyway?

What Exactly is Polestar?

As of 2018, Polestar is Volvo’s performance arm, providing tuning and performance upgrades for both existing Volvo models as well as new offerings. You can either buy a Polestar Volvo new, or bring in your existing vehicle to your dealer for an upgrade.

… [the team owner] changed the name to Polestar to “represent the frozen north of Sweden with the pole star and also playing on the connection to pole position and star of racing”.

These tunings take about an hour and can give you quite a whopping of extra power. Bring in your 2006 XC70, for instance, and gain an extra 28 HP and 36 lb-ft of torque. Not bad for an hour wait!

In 2017, Volvo purchased outright the tuning and performance arm of Polestar and decided to spin off the brand as a separate manufacturer to produce high performance electric vehicles.

Before all this performance manufacturing and engine optimization though, Polestar was simply Volvo’s team in the Swedish Touring Car Championship.

While founded as an independent company, Polestar has always been linked to Volvo. In 1996, the Swedish Touring Car Championship celebrated its inaugural year, and driver Jan Nilsson founded the company to join in on this new racing series – with a Volvo 850.

Let’s take a look back at how Polestar morphed from this racing team to a premier electric vehicle manufacturer.

Flash Engineering was the official Volvo team in the STCC, with the manufacturer providing funding and vehicles. That inaugural year, Nilsson – the team’s sole driver – drove the Volvo 850 to 1st place.

Fast forward to 2004 and Nilsson has sold his half of the business to Christian Dahl, who joined Flash Engineering as their chief mechanic back in 2001. The following year, Dahl changed the name to Polestar to “represent the frozen north of Sweden with the pole star and also playing on the connection to pole position and star of racing”.

In 2006, Polestar began to branch out from racing, partially taking over Volvo training for new mechanics and even creating training equipment for mechanic schools. In 2007, they further developed the program, supplying Volvo cars to schools and helping introduce new business methods to dealers.

Of course, Polestar was still heavily involved in racing. For the 2008 STCC season, Volvo asked Polestar to develop the new C30 from into a race-worthy vehicle – Polestar’s first chance to design and build a car completely from scratch.

While the team didn’t break any records with the C30 for the 2008 season, this new vehicle ushered in a new era for Polestar’s relationship with Volvo.

On top of all this, they also began producing concept cars based on the C30 and S60, with 100 tuned S60 eventually going on sale in Australia in 2013 – Polestar’s very first production vehicle sold to the public. That same year, a tuned version of the C30 also hit the market.

Polestar continued to race in the STCC and even went international, jumping into the World Touring Car Championship in 2011.

In 2015, Volvo announced they had purchased the performance arm of Polestar as well as the larger Polestar Holding (the owner of the Polestar trademarks). However, they left the racing branch intact under current-CEO Christian Dahl (remember that head mechanic that joined the team in 2001?)

With the change, Volvo began using the Polestar moniker for their high performance models and, now independent, Dahl renamed the racing team to Cyan Racing. Of course, the team is closely connected to Volvo, becoming their official partner. Said Dahl:

“We are extremely satisfied with the way the performance business with Volvo has developed. But we are a racing team first and foremost. This is an opportunity to return our full attention to our core business – to develop and race Volvo cars”

With Volvo the sole owner of Polestar Performance, they made two big announcements in 2017:

With these changes, Volvo hopes to compete with other high-performance electric vehicles, notably Tesla.

The first vehicle directly branded as Polestar, the aptly named Polestar 1 or P1, will be available in 2020 only via a subscription service. As promised the P1 will be a serious contender in the performance electric industry, pumping out 600HP via the hybrid engine, with an all-electric range of 93 miles.

After the P1, all models will be fully electric, with the Polestar 2 a mid-sized sedan and Polestar 3 an SUV.

What happened to Cyan Racing after Volvo split Polestar in two? Well, they’re still going strong! As mentioned, they’re still an official motorsports partner of Volvo and they’ve branched out since the split, going international for the World Touring Car Championship.

For the 2017 WTCC season, the 3-person Cyan team drove Volvo S60s to first place overall in the championship.

What Volvo Models Has Polestar Tuned?

As of 2018, Volvo offers Polestar upgrades for many of their models, though offerings differ by year and country. Upgrades are typically available for vehicles manufactured in 2006+ and bump power and torque by about 30 HP and 30 lb-feet respectively. While prices vary from dealer to dealer, these tunings typically fall around $800 to $1500.

While that might seem a bit costly for a software upgrade that other aftermarket companies can offer for much less, drivers who do go for the Polestar tune absolutely love it. Here’s MVS forum user JRL reviewing his own Polestar upgrade on his 2007 Volvo XC70:

“I like it. Not a tremendous amount of power but a very significant difference from 15 to 60 MPH. What I like about it more than the actual boost is what they did to the transmission. While my tranny was/is fine, the tune incorporated smoother, tighter shifts. It shifts with less lag, less slop while not being any harsher. Upshifts are about at 2-300 RPM higher, crisper with better downshifts. It seems to react a hair faster in manual mode too.”

As of 2018, Volvo also offers Polestar versions of the S60 and V60. These Polestar variants aren’t simply the normal models with the tune already in place. Of course, they do have the tuned engine, but also an optimized powertrain, stiffer suspension, upgraded brakes, wheels and tires, and sportier styling.

In 2016 Volvo pushed the Polestars into the controversial Drive-E 4-cylinder world, axing the tried/true inline 6 cylinder for the now-ubiquitous inline 4.

“for Polestar duty it’s been souped up a touch with a new turbo, connecting rods, camshaft, fuel pump, and fuel filter, plus a larger air intake along with 3-inch “full-flow” exhaust systems that raise power from 345 to 362 horsepower. Torque is actually down a touch from 369 to 347 lb-ft, but seeing as how the cars are now 44 pounds lighter than before, you won’t miss the torque….Volvo has quietly started building some of the best-looking cars in the industry. If you can overlook one glaring issue, you’ll find yourself behind the wheel of an excellent alternative to mainstream sporty performance cars.”

Now that you know pretty much everything you need to know about Polestar, maybe you’re wondering about Volvo’s other motorsports attempts?

Most of us are probably already aware of Volvo’s motorsports history, but it’s the 850 (including the wagon) in the British – not Swedish – Touring Car Championship that most of us picture when we think about blurry Volvos at high speeds.

Did you know that, even before the 850s cruised through the BTCC in the 1990s, rally drivers had been using Volvos as far back as the 1920s?

Ever since their first car came off production, rally drivers have picked the reliable, sturdy Volvo for long, harsh races.

In 1928 – just 2 years after the first Volvo came off production – three of these vehicles entered in the Swedish Royal Automobil Club’s Winter Rally – a grueling 652 mile race with snow chains and no helmets. While no Volvo won the race, two placed 6th and 3rd – not bad for a two year old car company.

A year later, 2 drivers entered a Volvo OV 4 in the Moscow-Leningrad-Moscow Rally. This 845 mile race obviously required snow chains, which was certainly a strange sight on a convertible vehicle with no heat! Amazingly, this drop top won first in its class that year. Jump to 1949 and Hilding Olsson, a Volvo dealer himself, drove a Volvo 444 in the Monte Carlo Rally. He certainly didn’t win, coming in 100th place, though still ahead of 66 more drivers.

Through the 1950s and ‘60s, Volvo entered into what you could consider their ‘golden age’ of rallying, with Volvo drivers taking home trophy after trophy:

Unfortunately, in 1966 two Volvo mechanics died from a truck crash at the Acropolis Rally and Volvo subsequently pulled out of all racing due to safety concerns.

Even before then – as most of us know – Volvo was involved with touring, winning the European Touring Car Championship in 1985 with the “Flying Brick” – the same 240 Turbo that landed them the rallycross championships above. The 2.1 liter engine in that 240 pushed out at incredible 300 HP, with a top speed of 161 MPH. With the 242 Turbo, Volvo also took home 1st place in the 1986 Australian Touring Car Championship.

Volvo has – quite literally – been racing since its very inception in the 1920s. From poorly-equipped convertibles on the snow-covered roads of Russia all the way up to the modern S60, Volvo’s put wheels on the track. And with Polestar such a crucial partner in their more recent history, it’ll be interesting to watch where Volvo’s motorsports teams move in the future. With Cyan Racing’s great showing in the 2017 WTCC, it seems pretty promising. 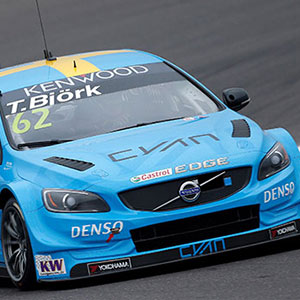 Article Name
The History of Polestar and Volvo
Description
With Polestar announcing their very first production vehicle - an incredible 600HP hybrid sedan – in 2017, we got to wondering. How did this once-time Volvo racing team end up as a high performance manufacturer under their own brand? Well, it didn’t happen overnight. Polestar’s been around since the mid-90s, working with Volvo from the get-go. But before we get into all that, what exactly is Polestar anyway?
Ryan
Publisher Name
MatthewsVolvoSite
Publisher Logo