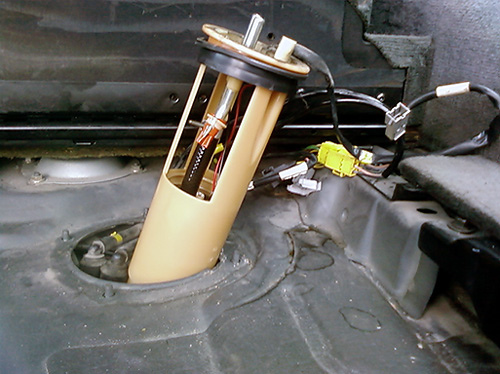 Have you experienced volvo stalling problems?

Stalling problems when you stop for a traffic light or when idling:

A stop light or idle stall often means the engine is not idling fast enough (idle speed too low), or the engine is being lugged down by a load on it created by the air conditioning compressor and/or alternator. It could also mean the fuel mixture is too rich or too lean, causing the engine to run poorly. Possible causes that may contribute to this kind of stalling include:

If the A/C compressor is binding up, possibly due to a lack of lubrication, internal wear or an over-charged A/C system (too much refrigerant), it may be lugging down the engine when it is engaged. If the problem only occurs when the A/C is on, there is an issue with the compressor.

NOTE: Low voltage can adversely affect the operation of the ignition system and fuel injectors, causing stalling and misfiring. A good charging system should produce about 13.5 to 14.5 volts at idle.

Stalls like this are often ignition-related and happen when the engine loses spark. The underlying cause is often a bad crankshaft position sensor, or sometimes a failing ignition coil (if the engine has only one coil). A faulty ignition switch that loses contact intermittently may also cause the engine to suddenly die for no reason.

When this happens, open the hood and check for spark. This can be done by pulling off a plug wire (if the engine has plug wires), and placing the end near the block while a helper cranks the engine. DO NOT hold the wire as it may shock you if the ignition system is working. If you do not see a spark or hear the plug wire snapping when the engine is cranking, the fault is in the ignition system.

If the engine has spark, it may have died due to a loss of fuel pressure. When fuel pumps fail, they usually just quit with little or no warning. The engine usually won’t restart and the vehicle has to be towed in for repairs. Listen for a buzz from the vicinity of the fuel tank when the ignition is turned on. No buzz means the fuel pump isn’t running. It might just be a blown fuse or a bad relay, but on a high mileage vehicle it’s often a bad fuel pump.

Eureka!! I think I solved the stalling problems!!!

I drove my Volvo on errands this morning, ending up at the local auto parts store to purchase fuel injection pressure testing equipment. When I went to leave, it wouldn’t start. It was a warm California day with the temperatures reaching into the 90’s F. I sat with car for two hours trying repeatedly to start it. It would just crank. My timing light indicated strong spark. I got a ride home and returned with my tools in another vehicle. I spent another hour trying to figure out how to hook up the test equipment. Then a guy from the parts store comes out and says that he thinks it is the fuel pump. He then hands me a rock and tells me to tap on the fuel pump a few times. This should knock loose anything that might be hanging up inside the pump. So I take the rock, crawl under the car, and tapped the fuel pump about a dozen times. I get out, get into the car, turn the key and it starts right up! I immediately purchased a new replacement fuel pump, drove the car home and replaced the fuel pump. I am 99% sure that this will cure the problem. I will check back in a couple weeks to let you know how this is going.

After four weeks, the car starts first time, every time. No more starting problem. Both new fuel pumps did the trick!

Looking back, it is clear that the original in-tank pump was not working when I bought the car. I found fuse #11 blown a few days after buying the car. I replaced the in-tank pump for good measure. Since I was going into the tank to look at it, it was easier to replace at the same time than to put the old one back in. I discovered the old filter sock had deteriorated and had at least two holes in the sock. I suspect dirt entered the in-tank pump, fouling it and causing the fuse to blow. I further suspect the main fuel pump was fouled with dirt from the broken filter sock, which caused the intermittent starting.

Should you encounter a bad main fuel pump on your car, always inspect and/or replace the in-tank fuel pump, so that you can verify the condition of the filter sock. A bad or deteriorated in-tank filter sock will lead to fouling both fuel pumps with dirt. (Should you go to the trouble of taking out the in-tank pump, you may as well replace it while you got it out.)

This is just delightful. How Volvo can get away with a long standing problem of selling cars that stall is anyone’s guess.
My 2016 XC60 stalled this morning as I was starting to depress the brake pedal . It scared the daylights out of me. I called the service dept. at my Volvo dealership.. and the service rep told that he never heard of that of that problem before.. Yeah right . Not only that.. but I was told that they couldn’t take the suv in until next Wednesday due to the holiday( today’s Friday). I would think that this situaton would fall under the category of an “Emergency” and they’d want in brought in right away.. but I guess that’d be asking for too much..
Well after a little research i find out that there’s been a recall on most all 2016 Volvo models with regards to stalling. I never received a notice but that’s ok.. I don’t mind my vehicle stalling in the middle of traffic. What nerve! I’ll be calling them on Monday and giving them an earful.. The recall number is R39574 and their number is 1-800- 458-1552

I posted just recently about my Volvo s40 2005, in regards to an fuel filter. If my car can be replace with a new fuel filter. I am in URGENT need of some answers I bought this car from a man who took my money $5.800 and failed to tell me that the vehicle was in two prior accidents, needless to say I found out by the DMV that the vehicle was not his to sell because the paperwork between the man I bought it from and the person who sold it to him was incomplete. Another thing when I paid off the car 10 months later, I get the pick slip with the date posted on the pick slip was the day I put $4.100 dollars as a payment. This man took my money and sold me a vehicle that I have been having problems with. The vehicle is all that I have as a single mom who travels to do residential housekeeping I bust my butt for someone to take full advantage of my kindness and to make my payments on time. I’m so upset. So can someone help me with answering my question about my fuel filter quickly. I would greatly appreciate you and your time. Thank you.

I have a 2005 s40 Volvo. Can I replace a fuel filter to this type of vehicle, and where do I replace it?

Well this is so familiar to me. I have 4 cars including a Mercedes and the Volvo S80 2004 is the only one we just can´t trust for a drive on a long distance. Hard to start when cold, sudden stalls etc. Last weekend it just stalled while driving at night on a highway at 75 miles per hour right in the middle of a curve, next thing I knew, no lights, no wheel, car completely shut down, it took me at least 3 minutes to take it back on while troubleshooting the road in the darkness. Hard to say this is the safest car on earth and for me the less reliable to drive. Two things I have discovered, it starts right back whenever I pull the crankshaft sensor cables (sensor replaced already) or it will fire after 2 o 3 tries while leaving the key on. My confusion is what is it, fuel check valve or the CKP sensor?

You take it to the shop, they plug in the scanner and next is a long list of parts to replace that will not solve the problem in most cases.

Well, I have a 2012 Volvo S80. It suddenly started stalling after nearly two years. Only happens in the morning first thing. Once it stalls, you must put the car in PARK to restart it. This is extremely dangerous since you can be on an “on ramp”, a highway or just driving in traffic. It only happens when the engine is cold. All of the warning lights come on, the tachometer drops to zero and the engine lights stays on. Once it is warmed up it is fine. The Volvo mechanics are stumped. So, my car is going back in and will stay at the Volvo dealership until it is fixed!

I have a 1992 940gl volvo that seem to stall while I am driving at a stop sign. I went on Angie’s list and found a mechanic when the car was towed to the mechanic they could not find anything wrong . The mechanic stated that the car would stared up. I would get the car back home and the problem would still occur. the mechanic replace the crank shaft sensor, lower ball joints, front sway links,main fuel relay, radio suppression relay. the car have been to the shop three times. please tell me if something else could be done . I ask him about the fuel pump and he stated he didn’t think it was the fuel pump because every time they had the car it would start. I ask them did they drive it on 295 and they stated only about 2-3 miles

BLUF is after changing my fuel filter and fuel pump, my Volvo surges then dies, driving my die at stop signs. Furstrating but am asking for help.

I has a similar problem with my 1999 s80T 2 ltr and found that when I installed a new battery it fixed it? Cheap option to try another. REgards Kerry

We have an. XC90 that stalls when we are on the interstate. Has 146 miles left in the tank v it’s getting really frustrating. B

1994 850 Stalling problems mainly at stop lights and/or stop signs. Let the car sit for about 4 minutes and it starts.

I’m having a similar problem with my 1989 240. It will drive for awhile then just stop. About 2 min. Later it will run. Sometimes in the morning, sometimes at night. It does it alot uphill but not to much downhill. It does it a lot in town but not much on the freeway.

My 1996 850 is doing the same think. Twice I have taken to a trusted mechanic and he is stumped also.

Did you ever get the answer to this problem?

I have an ’89 Volvo 740 GL Automatic with 200,000 miles. As I drive the car it will just Stop running. There is no indication that it is going to stop. The engine just shuts off. Even with my foot on the gas accelerating. I then have to turn the key off and wait for 30 seconds or so, then it will start up. It may do it again or not. I had my mechanic look at it and he is stumped. we have change some sensors and settings. Found a broken ground wire from the battery to the engine and it still stalls. What could this be?