I'd like your sage advice on the following situation:

), and properly maintained the whole time.

The symptom that I'm having is that I'm getting a bit of vibration at idle only; above 1,000 RPM, everything is fine. The engine revs properly (i.e. no hesitation when applying the accelerator from idle in neutral or under load), and gas mileage is normal. Engine temperature doesn't seem to have any effect -- hot or cold, the vibration is present. I also get a shudder as the RPMs drop when I turn off the ignition.

I pulled the plugs which have about 10,000 miles on them, and unlike when I changed them last, they were now carbon fouled, so I'm running rich at least part of the time, and I'm thinking at low RPM. I cleaned them up, and put them back; the symptom persists.

* I recently did the PCV system, the engine mounts, and both torque mounts (this was the second time, with free replacement parts from the excellent folks at FCPEuro

; both fixed.
* Checked all vacuum elbows for cracking, etc.
* Did the relearn procedure on the ECU computer.
* No CEL or codes in the computer.

Based on the above, I'm feeling pretty confident that this is a fuel/air mix issue, and not a bad cylinder.

* I did another extensive smoke test of the vacuum system, and even though my garage now reeks of burned baby oil, I could find no leaks.

Over on volvoforums.com, it was suggested that the symptoms might be caused by too high fuel pressure (pointing at the shudder/run-on at shutdown). I don't (yet) have a fuel pressure gauge, so here's what I was able to do right away:

My car has the fuel pressure regulator located just in front of the fuel filter (underneath the passenger rear seat), and a fuel damper on the underside of the fuel rail.

I pulled the vacuum elbow off the fuel pressure regulator, and there was no fuel or smell of fuel, I then started the engine. There was no change in the idle behavior, and no sucking sound at the elbow. I have a hand vacuum pump with an integrated manometer, and this showed no vacuum at the elbow. I'm seeing about 16 PSI vacuum at the tree at idle.

What should my next move be?

This has to be the most comprehensive first post on an issue in history. Congrats on your one owner awesome MT!

Wow. You’ve covered pretty much everything except replacing your ECU.

Could you show a picture of the fouled plugs so we can get a sense of that problem? This is usually a vacuum leak somewhere but a smoke test should find that. I think monitoring fuel trims and the MAF reading are the next steps in diagnosis, so you will need some tools for that or a nearby MvS friend.
Empty Nester
A Captain in a Sea of Estrogen
1999-V70-T5M56 2005-V70-M56 1999-S70 VW T4 BMW
Link to Maintenance record thread
Link To Volvo Glossary
Top

Ha! Thanks for the compliment. This is the result of wrenching on this car for nearly a quarter century, and the excellent posts of others...

I’ve ordered an ELM 327 scanner and will get into the MAF and fuel trims when it arrives (supposed to be on Monday).

Do you have a view on whether I should be seeing vacuum at the FPR? At first glance, I’m inclined to say yes, because if I get regulation at any time, it should be at idle... But when I look at the vacuum hose routing maybe not... It goes as follows: tank - rollover valve - tee to FPR - canister - EGR valve - intake manifold. If that path is blocked anywhere, I would expect to get rich at idle. For example, a stuck-closed EGR valve could do that. If I’m getting high fuel pressure that could explain the idle issue as well as the fouled plugs...

I approached two local mechanics and asked them if they could measure my fuel pressure, and both tried to upsell me diagnosis, so I’m in the hairy edge of buying a schrader-compatible fuel pressure gauge...

With that scanner coming you can pull the plug on the MAF and run the car on the default rpm-trim map in the ECU.
Empty Nester
A Captain in a Sea of Estrogen
1999-V70-T5M56 2005-V70-M56 1999-S70 VW T4 BMW
Link to Maintenance record thread
Link To Volvo Glossary
Top

As promised, here's a picture of a fouled plug. That's about 1.5 weeks and 100 miles on it since it was cleaned.

Also, some more analysis on smoke testing for vacuum leaks.

The purge valve is normally closed, so this means that injecting smoke into the vacuum system via the tree will NOT get past the purge valve and expose leaks -- if any -- in the evap system or in the line going back to the fuel PRV as both these areas are on the other side of normally closed said valve. Not sure why I didn't realize this before now, but there it is.

I pulled the purge valve and smoke tested the canister and the line back to the fuel PRV, and found no leaks.

I then tested the purge valve. It had a resistance of 25 ohms. I wasn't sure if polarity mattered, so I started out at 7.5 volts, and it would click but would do so intermittently. I increased the voltage to 11 volts, and then it stopped responding altogether.

I re-installed the purge valve, but left the electrical connector disconnected, and started the engine. The voltage at the connector was about 6 volts. Maybe this is because the ECM is pulsing the valve? This generated a CEL and a P0445 code, which I was able to clear (and keep clear) once the purge valve was re-connected. It looks like the ECM is measuring current across the valve. The vibration at idle and shudder at shutdown remain the same.

I couldn't find a vacuum diagram for a non-turbo, but for the turbo version it looks like (if I'm looking at it correctly) that the vacuum hoses to the fuel pressure regulator are not connected directly to the evap purge valve. It looks like there are connections between the intake manifold and the air intake tube.

Sorry I can’t help v-jan. Had to add my 2¢. Wait, maybe I can help. I know we have an NA vacuum hose diagram here...
Help keep MVS on the web -> click sponsors' links here on MVS when you buy from them.
Also -> Amazon link. Click that when you go to buy something on Amazon and MVS gets a kickback. 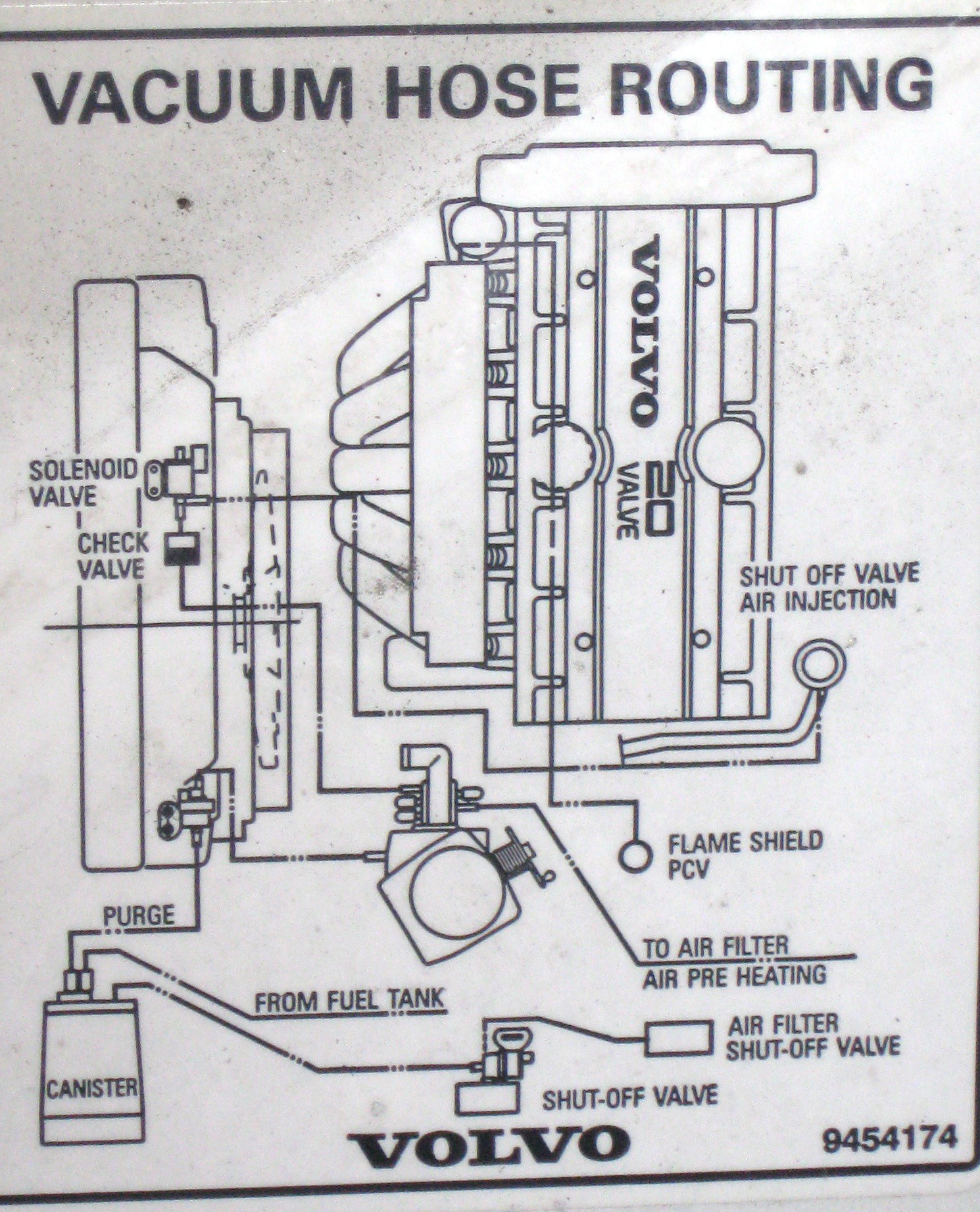 Source: viewtopic.php?t=24807
Help keep MVS on the web -> click sponsors' links here on MVS when you buy from them.
Also -> Amazon link. Click that when you go to buy something on Amazon and MVS gets a kickback.

The purge and the fuel pressure regulator are separate. The purge valve only opens during mid range rpm for evacuating the canister when there is decent manifold vacuum to suck out the fumes. The other time it opens is during idle when it runs the system self test for leaks. If you have any leaks in the purge part of the system, it will pop a P04-x code, that test is really sensitive

I’ve found the brake booster line is the best way to smoke test, protect both the MAF and the throttle body from smoke though, wth plastic bags. Test the snorkel by removing and inspecting

I completely agree that fuel pressure is purely controlled by vacuum, using the FPR, and is open loop in the strict sense (i.e. there's no fuel pressure sensor at the rail).

On most cars, a vacuum line is attached straight from the intake manifold to the FPR, and this is how fuel pressure is controlled -- high vacuum (i.e. at idle) will cause the FPR to open and allow some fuel to return to the tank, resulting in lower fuel pressure at the rail.

"As to duty cycle, the purge valve flow rate is controlled by duty cycle with fixed frequency. 10-12% idling with the rate going up with open throttle and vapor found present."