Fast Friday #5 is by Lucky... again! As you may have surmised by now, I signed him to a one-year, $10 million deal to Team MVS.

This is part 1 of 2. See Injector sizing and MAF sensors, Part 2.

Injector sizing for performance is a somewhat misunderstood concept when it comes to tuning MAF based cars, especially Volvo. The reason for this isn’t that the math or estimations for larger injectors isn’t sound but errors that do arise generally come from a lack of understanding of the factory air flow measurement and its limitations.

It’s interesting to note that cars with even stock turbochargers are able to max out a MAF sensor as early as 14psi. When I say “Max out the MAF” what I mean is exactly that. The MAF sensor can only measure a certain maximum amount of airflow through the sensor. At some point the airflow across the sensor is higher than its maximum measurement and the 0-5v output is at its maximum 5v reading. Consider the attached graphic. Note the MAF voltage tops out at 5v while the ECU calculated airflow continues to climb. The car in this example is a C70 with a 19T turbo at 16psi. 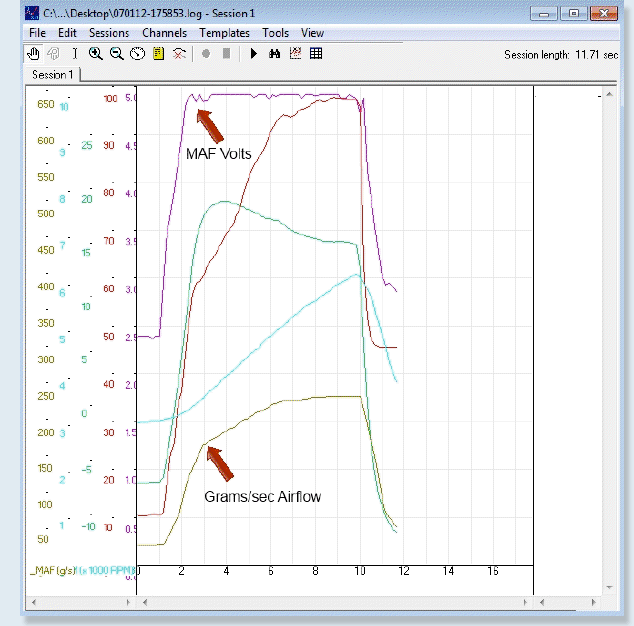 The ECU Steps in To Protect... or Does It?
The ECU can project or calculate the airflow past the MAF sensors maximum measurement based on RPM and VE (volumetric efficiency) of the engine but the further past the max readout point the ECU has to calculate, the more inaccurate the calculation gets. This means the engine will tend to lean out, and many times folks will then surmise that larger injectors are necessary. While larger injectors may help to enrichen the mixture in those conditions, it’s not the real solution, and here’s why.

Big Injectors Not The Answer?
If the airflow into the engine is not calculated precisely then the fuel target necessary for safe engine operation is likely incorrect also as seen with lean mixtures. Additionally since airflow and RPM determine calculated load then ignition timing is also incorrectly calculated. This is doubly dangerous to the engine when you have lean mixtures, overly advanced ignition timing, and a fast spooling turbocharger like the TD04 family turbochargers that Volvo uses.

So what’s the solution? Ultimately a larger MAF body like that from the S90 or ME7 ECU’s is large enough to bring the engine measurement range up to the 400 bhp level. Of course proper tuning is required to make these components work in harmony with the ECU and the engine setup. We’ll cover more on this next week.

The HP-vs-MAF Line
The rule of thumb is for M4.3 and M4.4 fuel systems (1994-1998) if you’re under ~330bhp then your stock MAF and injectors are likely fine, however a slight increase in injectors sizing can be useful up to that level. If you plan on going over 330bhp, then plan on needing a larger MAF body and larger injectors. For ME7 cars (1999-2009) with the larger ME7 MAF typically only increasing the injector is necessary for upto 400bhp power levels.

Tune in Next Week
Next week we’ll go over how to select injectors as well as improvements to the fuel delivery system as a whole.

_questions, comments, arguments and freakouts accepted and encouraged
_my bolds
_don't you love science?
Matt
Help keep MVS on the web -> click sponsors' links here on MVS when you buy from them.
Also -> Amazon link. Click that when you go to buy something on Amazon and MVS gets a kickback.

On a 98 t5, what would the next step up in injector size be, and does this need to be accounted for by a change in the tune?

Really depends on the supporting mods and turbo you are running. For most injector upsizing is not necessary but for those that do need to increase injectors Volvo Green injectors are nice since they are plug and play, readily available and cost effective. If you do increase your injector size you certainly should have the ECU retuned to account for it, otherwise you'll be burning more fuel than necessary.
ARDtuning.com - Follow us on Facebook
Top

If you're on the stock ECU (16T) then that's pushing it a bit but not dangerous in my opinion. I'd be interested in AFR's at those boost levels though to know for sure....
ARDtuning.com - Follow us on Facebook
Top