I'll be performing maintenance on the server March 31. I'll try my best to make interruptions as painless as possible. Thanks for your understanding.
Did you know? 🤔
Logged in users can get email notification of topic replies Log in or register (free).
Amazon Link Buy anything with this and it helps MVS!

No Turbo? No Problem! Part 2
It's testing time for this weeks Fast Friday article and we're back from the track on part 2 of the non-turbo build. To recap, last week we outlined our plan for tuning and parts upgrades for the 1995 850 non-turbo automatic that we've chosen as our test mule and this week we'll be reviewing our preliminary data on stock performance as well as how the car performed with no parts upgrades and just tuning!

I'd like to start out by saying thanks to Kyle E. from the V shop for being our driver during our testing. Kyle has more time on the track than just about anyone I know and he's well known in the local scene for the work he's done on his non-turbo 240 as well as his consistency on the quarter mile. He's the perfect candidate to provide feedback during our testing and provided some great input during the runs, thanks Kyle! 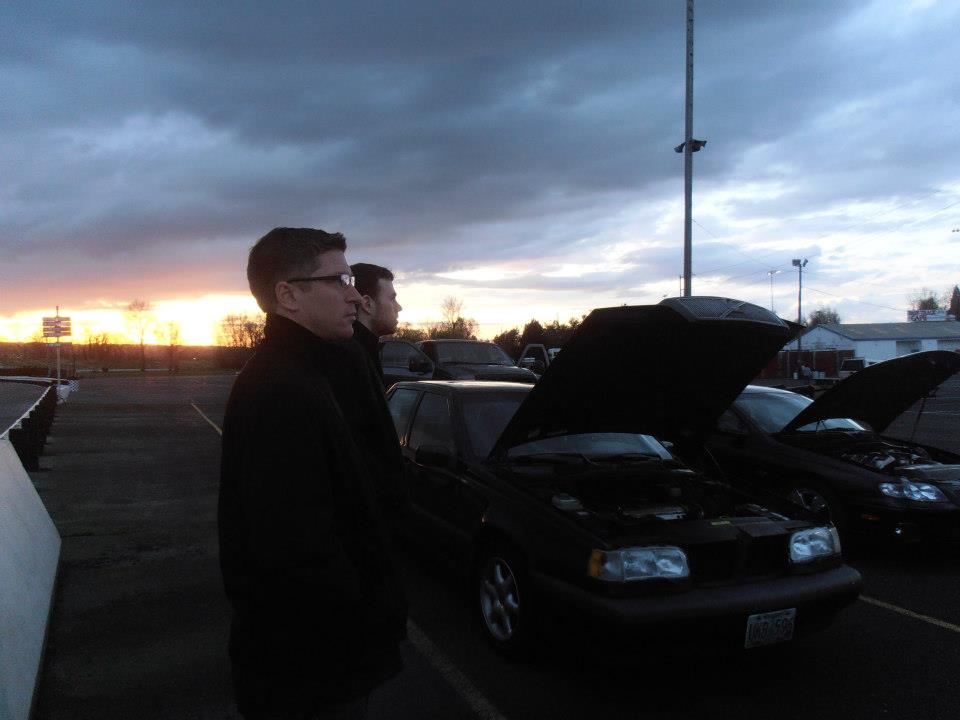 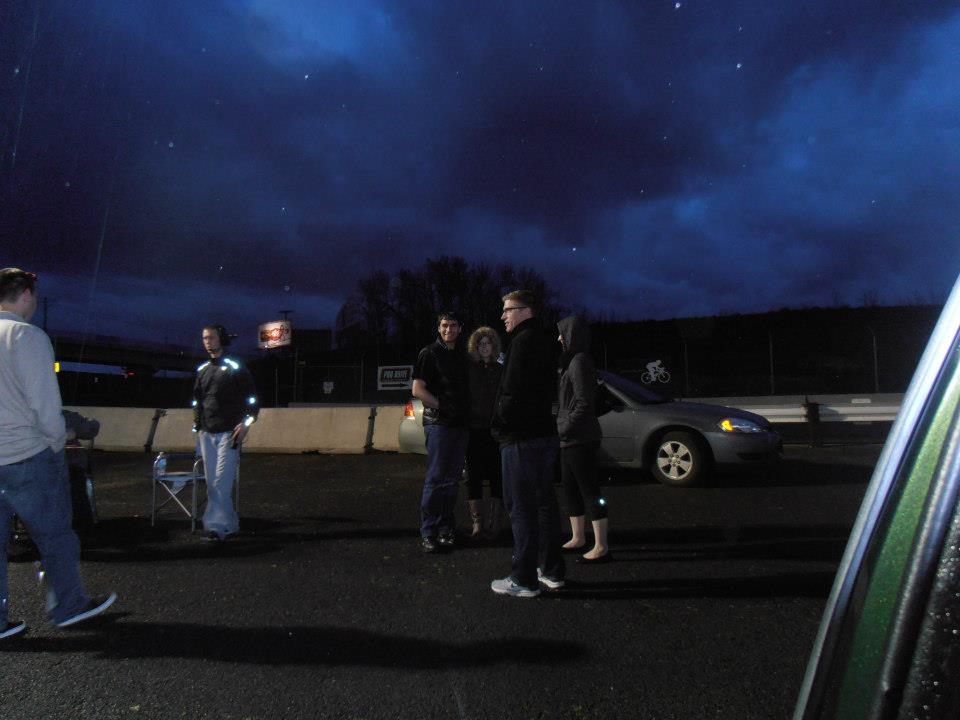 To Begin... Weather: When we arrived at the track weather was not looking good and we got caught in a few sprinkles that seemed to threaten the evenings events for sure.

However after a 30 minute wait, the weather cleared, we got the go ahead from the tower, and we lined up on the grid! The first run put down a surprising 17.16 second run with a 2.55 60 foot time. Not too bad for a bone stock 225K mileage automatic transmission 850. Thanks to Kyles consistent launching the second attempt (also bone stock) ran a 17.14 with a 2.67 60 foot time. If nothing else this little machine is consistent and these were the kind of numbers we were hoping to see in stock form so far so good! 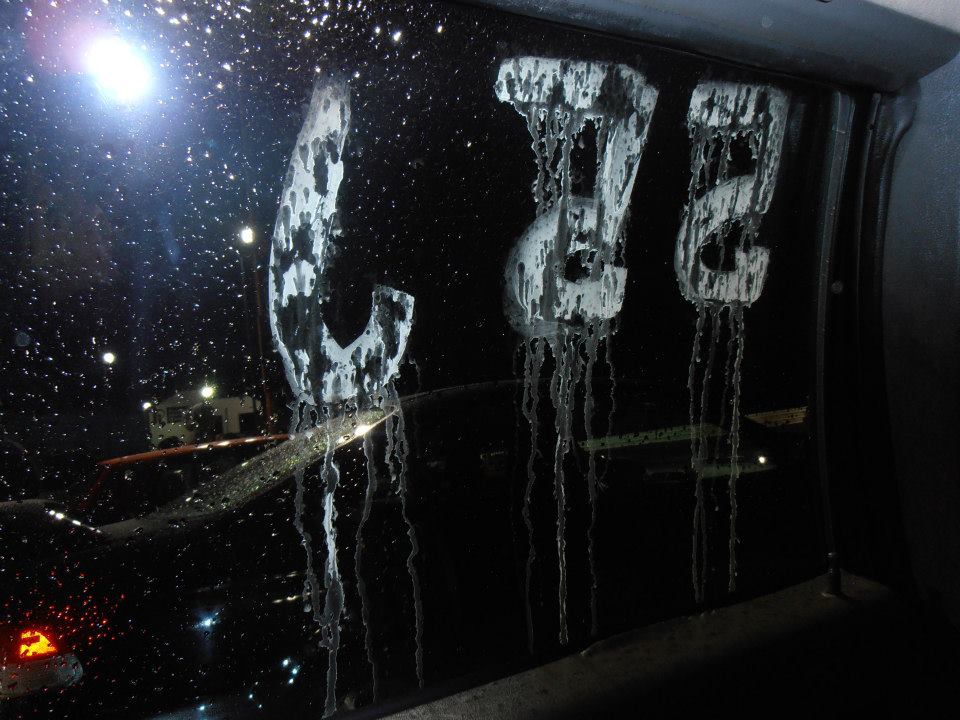 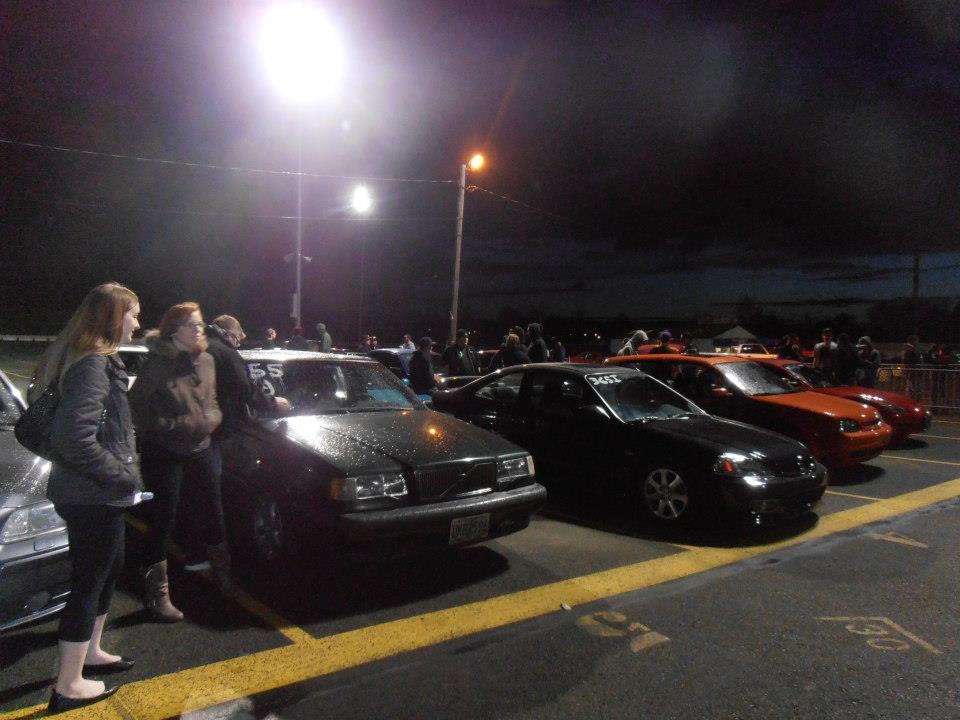 Prior development: I'd be driving the car all week doing some road testing and had gotten what I thought was a pretty solid tune file. Midrange was really snappy compared to stock and the fuel economy had even increased by 3 mpg quite consistently. The car was much more enjoyable to drive and with some considerable addition to the part throttle timing maps I was surprised how well the car behaved. With this in mind I really expected to see some decent time shaved of the quarter mile ET but I was in for a bit of a surprise, and not the good kind --


As you well know in a quarter mile drag the throttle control for a lower output engine, aside from the launch, is essentially foot hard down all the way. However that's not the way we typically drive cars on the street -- at least I hope not. I had spent considerable time in mid-range tuning which had netted a clearly improved power output and efficiency but when I translated this to the wide open throttle maps I had over advanced the timing such that the ECU was hearing mild detonation and in turn we suspected it was pulling timing back. This reduced power and left us with our first tune run at 17.23, actually slower! After a second run at 17.31 we knew for sure the ECU was retarding ignition timing and we needed to go back over the WOT timing curve.

Redo: We were running out of time but I wanted to at least get some type of gain from tuning as I knew there was some room for improvement over stock mapping. Starting from scratch I free handed the timing map for WOT and re-curved the enrichment map for fueling. Without my ignition angle calculator I had to work the ignition advance in my head quickly as we were realistically were only going to get one or two more runs in before the night was over. With that done we loaded the ECU and sent Kyle back to the grid!


After the first run we saw some improvement but Kyle felt he could get a bit better launch and get us into the 16' so he went back to the grid for one last run. With an excellent launch and a better timing map we saw a 16.91 with a 2.53 60 foot time. Not astounding by any means but it proved there was room in the tuning for improvement even if we only had time for a quick remap in the pits.

With more time and testing I think we can get the ET down to 16.5 and if time permits we'll be testing again this Saturday. We'll ideally plan to just tune on Saturday with some adjustments to cam timing while were on site. Then during the following week we'll install all our hard parts and finally return the week after for final runs down the track! 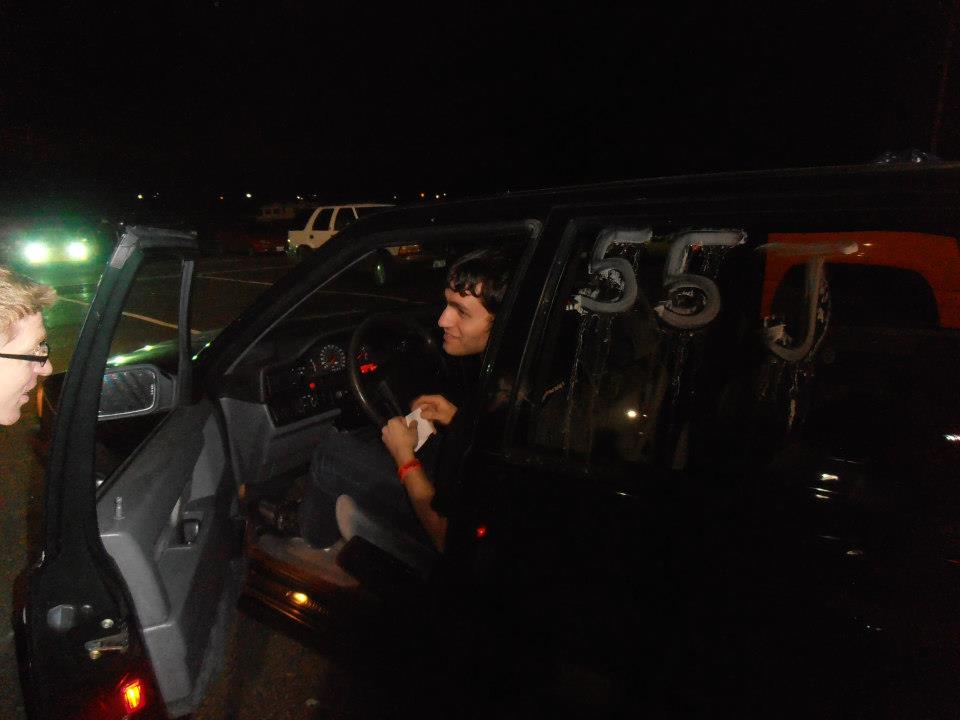 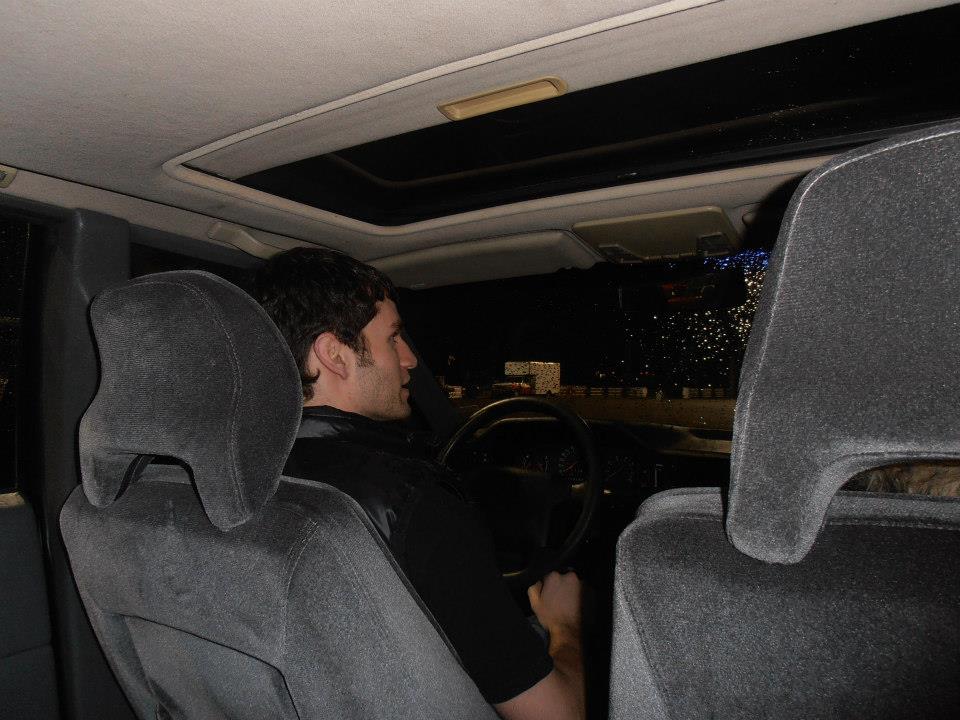 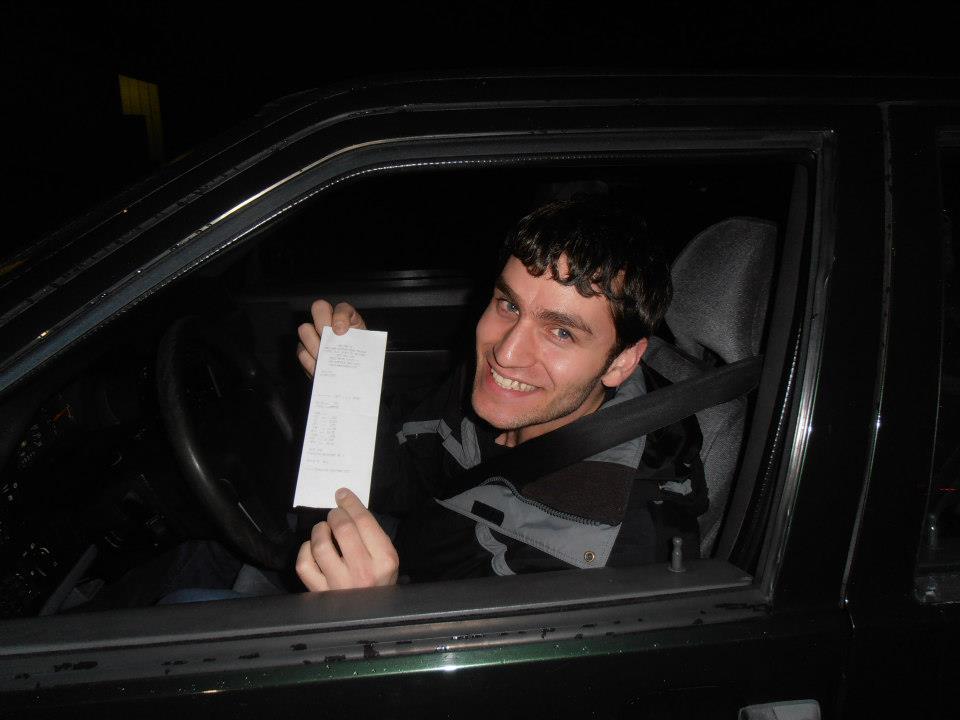 Retrospect: I realize the numbers on this build aren't the most exciting and of course the experience at the track was one that incurred some learning that partly slowed development, but I've come to find these happy accidents are just that --. something unintended but not necessarily undesirable. With that in mind I'm excited to continue the work on this and see what else we'll learn as we move forward. I hope you'll stay with us as the saga continues!

We're back from the track today and have some updated numbers from our recent testing. Bear in mind all our current gains are from nothing more than ECU tuning and a bit of cam timing... Picking up a solid 0.4 seconds comparing stock tune and stock cam timing to our most recent tune file and retarding cam timing by 3 degrees. Not bad for a non turbo that's 18 years old

Intake cam was 3 degrees advanced and exhaust was 3 retarded for that quickest run. A little less fuel and junk in the trunk and I think it would be capable of a 16.5. Pretty darned good indeed for 226k!
Top

Lucky and KLR, thanks for documenting all this. There's never been a better time to own a N/A FWD Volvo with the 10+ years of time the community has had to test these modifications.
Help keep MVS on the web -> click sponsors' links here on MVS when you buy from them.
Also -> Amazon link. Click that when you go to buy something on Amazon and MVS gets a kickback.

I never imagined a stock 850 engine had THAT sort of performance; not shabby at all.

Has the throttle plate been replaced with the smoother 960 design on this particular vehicle and if not will that gain a result at wide-open throttle?
Current cars:2002 XC70, 2006 Ssangyong Rodius (Stavic), 2006 XC90 2.5T, VW Transporter 2.5TDI

Totally stock aside from tune. The new 70mm throttle body is going in this week and will be covering all the parts install next Fast Friday!
ARDtuning.com - Follow us on Facebook
Top

Well... we might be paddling up stream, but we are making some progress

Good stuff. At the very least, you proved that a tune that works for the street is often not what you want for dragging (and more importantly, the other way round). What did you find were the best changes in timing for daily use? I have a 20v 1997 V70 which I suspect would have better throttle response and economy with a few degrees extra timing, but I don't want to invoke the knock sensor.

What tyres/tyre pressures were you running? (If you have posted this elsewhere, ignore me and I will learn to search better

Keep up the good work.
Top

For cam timing so far the -3 and -2 seemed to bring in the best midrange and ET but we'll be experimenting with that a bit more this next week at the track.

I just sent Matt this weeks fast friday regarding the install of all our hard parts so well be back at the track shortly!