First off - huge thanks to BillR99 who posted a good summary on VolvoXC Forums and also on a FCP Euro Blog Post. He also sent me some advice about this that was basically the sole reason I tried this repair. So many many many thanks to him, and also basically all credit

I had a leak in my PS system. Originally I thought maybe it was seals & was going to dump some leak-stop in to see if it stopped. Luckily I decided to take a look anyway. The hard lines on my rack instead had corroded away. Leak-stop may have temporarily plugged the pinhole leak due to thicker fluid, but I'm almost positive that later I would have instead had a catastrophic failure instead. So better to check the issue!

The issue - the hard lines on your SMI power steering rack are leaking. Perhaps due to your salty environment, combined with your lack of using rust-proofing spray. Or you use rust-proofing and they didn't reach the lines, since they are almost perfectly masked by the subframe. Now your lines look like this: 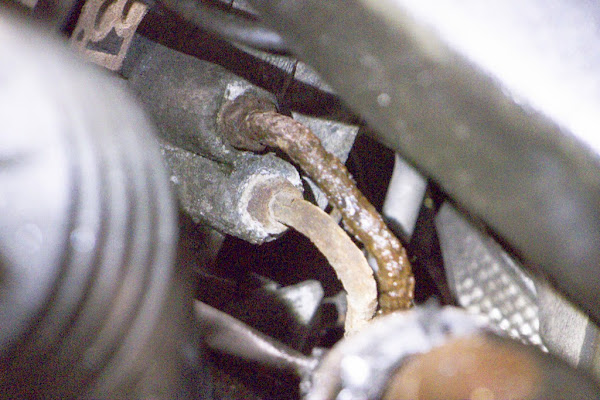 If you go anywhere they wanted to replace the rack, which the local aftermarket part was $900 for. I could get a better deal by mail-order but still had shipping to deal with (along with core return). I'd also just gotten an alignment & new inner tie rods so would have wasted that money too. I quickly tried getting a quote on replacing just the lines, but it was too risky for them to quote (what if the fittings broke off?). So instead was forced to mostly DIY.

However I was (almost) able to do this without removing the rack, and it is possible. This saves you a bit of hassle I think, but it's still a very time-consuming job. If I was doing it again I would have tried harder to convince a mechanic to do the work instead. Overall I suspect it would have been as fast to remove the rack & replace the lines with the rack off the car.

Doing this you'll need a few tools: The metric thread restorer, which I bought at princess auto, looks like this: 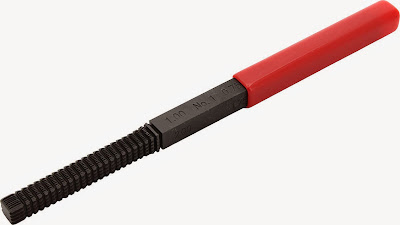 I'd highly recommend also getting the M12x1.00 bubble flare nut fittings. I didn't and had to reuse existing ones which worked OK, but BillR99 was able to find them locally (everyone locally more or less laughed at me for that size).

If you want to do it in-place you absolutely need the engine support bar. If you are removing the rack it's not needed I think (according to people who've done it). However you need clearance between the oil pan for getting a wrench in.

See the VIDA instructions for full details. I've included a few notes from my own experience here:
For getting fittings back on - you'll probably want to modify a socket such you can push inward while turning the flare nuts. Be sure to clean up the fittings in the PS rack along with external thread on the flare nuts (if attempting to reuse them). Getting them started is the hardest part by far. If they aren't catching you might need to push the hard-line slightly to ensure you are going in straight. Here's something like what would be ideal: 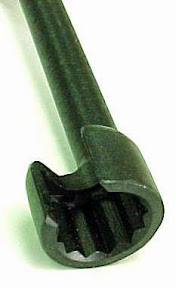 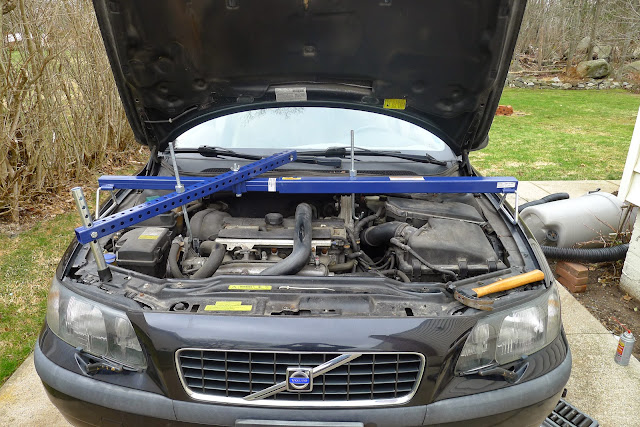 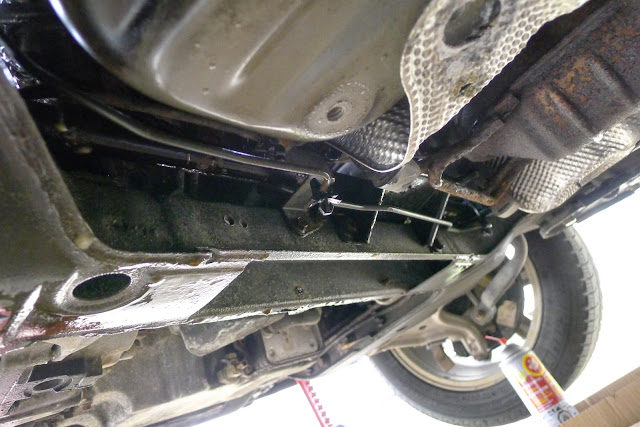 Front & Center you can see one side of the line to cut. I'm using a "Close Quarters Hacksaw" where the blade sticks out the front. Be very very careful since there is often lines right behind or beside it you cannot even knick. Note the engine etc is supported from above so there is almost no weight on the jack, otherwise you'd bend the subframe! 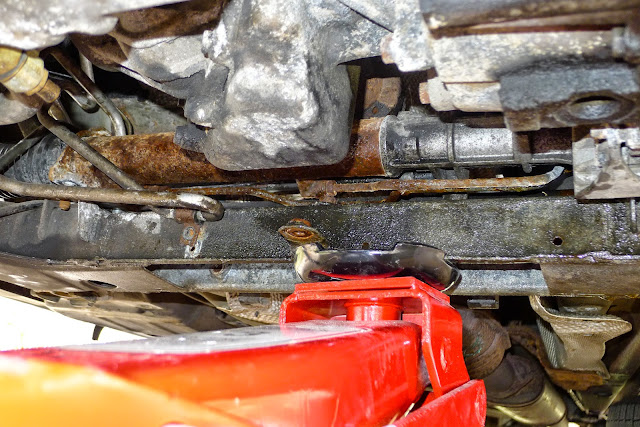 This is the easy job on the other side: 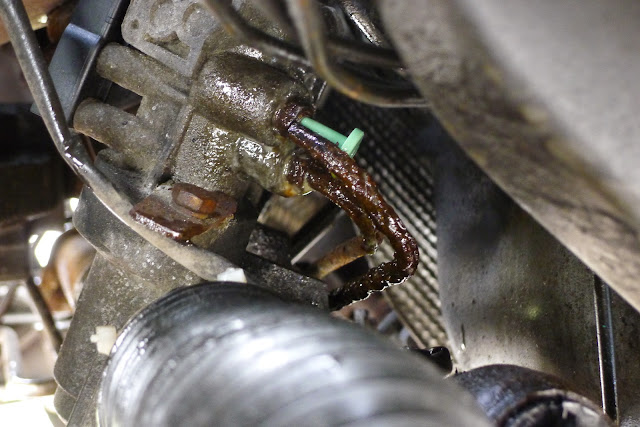 You may need to hoist the PS rack up a bit: 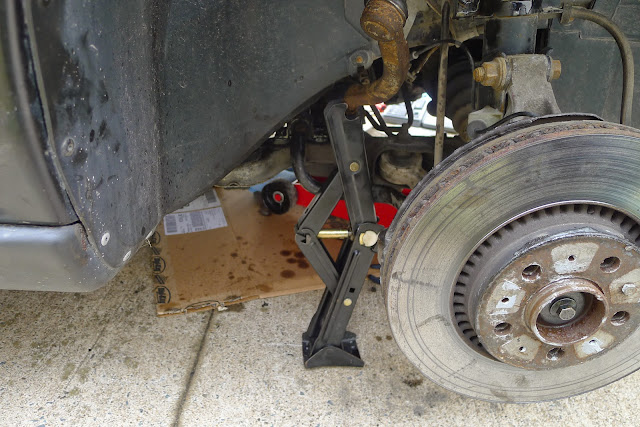 Close quarters! Here I haven't actually loosened the anti-sway bar as I did that after cutting the lines off: 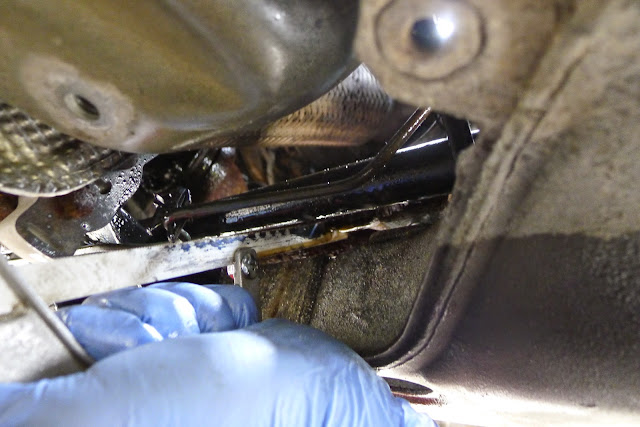 The shorter line must come out first before the longer one can be removed: 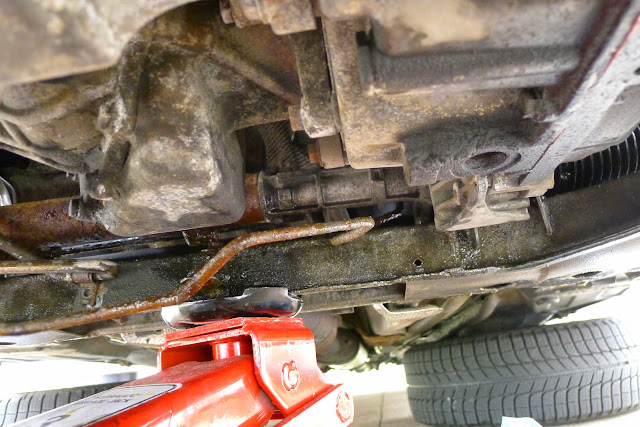 You can get a ratchet on the 14mm bolt on the anti-sway bar with subframe lowered enough: 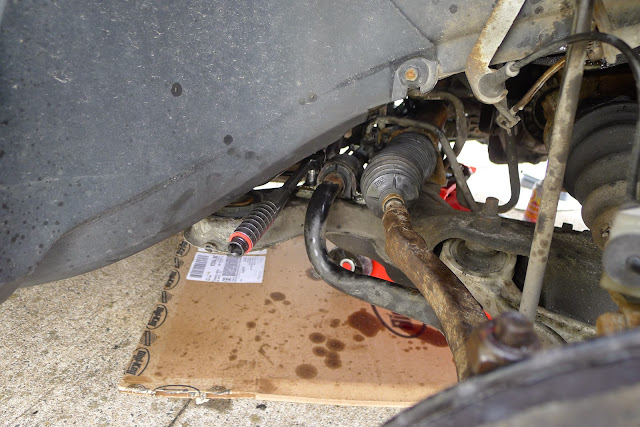 Alternatively not a 1/2" drive ratchet fits well into a 14mm open-ended wrench. The box end can then fit on the anti-sway bar bolt: 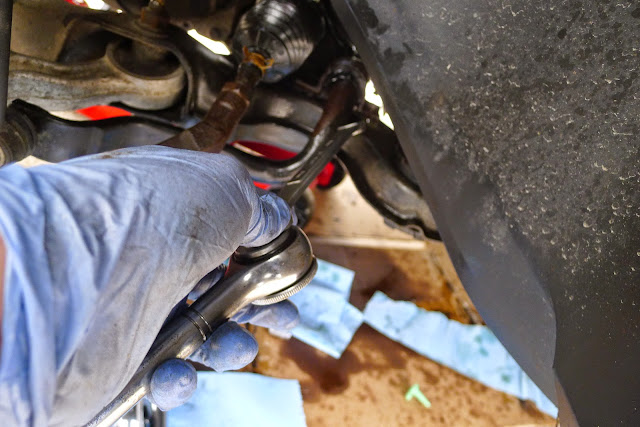 You may need to get creative with ratchet + extension bars for breaking free the old flare nuts: 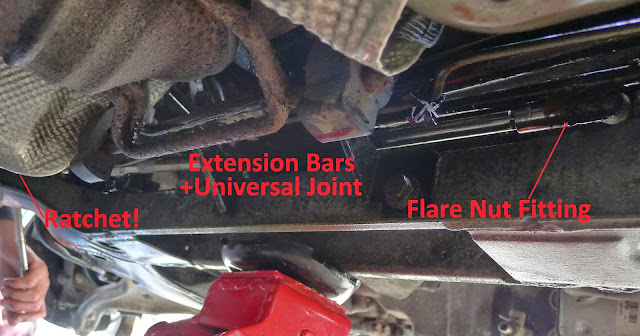 And here is the new + old lines: 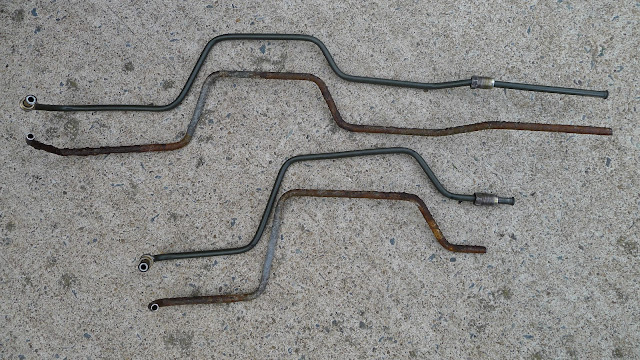 When refitting lines, the two lines on the long part of the power steering rack are very very slow to get in. You can turn them 1/8th at a time or something sometimes less, and even a ratcheting open-end wrench doesn't help you. It's slow & frustrating. Part of the reason it would have probably been as quick to do this by removing the rack.

I ran out of time to complete the second line (I have to work outside so have a limit to how much cold/wet I can bare). Someone with a lift finished it off for me, but ultimately I still saved ~$1000 or so compared to the quotes I had originally. So moderate success. The person that finished the job did the same thing (e.g. they didn't remove the rack), so it IS possible to get both lines done this way.

For one of the fittings you NEED to lift the engine slightly to get enough clearance on the ratchet. This is why the engine support bar is required.

These users thanked the author coflynn for the post:
matthew1

Great DIY. This is for the 2001-2003 models fitted with this rack and the thinner and not rust proofed lines. These will rust indeed in the salt belt area. New lines from the dealer are about US$150

But better jack the car on jack stands and spray from all angles lots of rust proof pain before this happens.
Several Volvo Repair Videos https://www.youtube.com/playlist?list=P ... s0FSVSOT_c
Top

When refitting lines, the two lines on the long part of the power steering rack are very very slow to get in. You can turn them 1/8th at a time or something sometimes less, and even a ratcheting open-end wrench doesn't help you. It's slow & frustrating. Part of the reason it would have probably been as quick to do this by removing the rack.

How about a crows foot - or - blasphemy - you buy a ratcheting cheap wrench from HF and leave it on the line when done, taping it up to prevent noise.

That engine support was indeed strong enough? Interesting how it sits on the fenders and whatever that thing is that runs along the front. Where'd you buy it?
Hers: Charcoal 2002 S60 2.4t 187k
Top

Is it not possible to jack the engine up from the oil pan, I recall raising mine that way.
Top

I did when replacing the passenger side control arm bolts.

dlundblad wrote: ↑
Tue May 08, 2018 9:22 am
That engine support was indeed strong enough? Interesting how it sits on the fenders and whatever that thing is that runs along the front. Where'd you buy it?

You can get that from an Auto Store or Harbor Freight at 1/2 price. About $80

Great writeup, coflynn!
Help keep MVS on the web -> click sponsors' links here on MVS when you buy from them.
Also -> Amazon link. Click that when you go to buy something on Amazon and MVS gets a kickback.

But better jack the car on jack stands and spray from all angles lots of rust proof pain before this happens.

Interesting, so starting in 2004, they changed the material for the line?