After 16 years and 178,000 miles, my 940 was quite loose in the front end. There was a clunk on the right side under hard braking. In general, the front end seem to clatter over rough pavement, which we have a lot of in Los Angeles. (So much for our tax dollars.)

Checking out the front end, I noticed that the ball joint boots were cracked. I detected no play, though. In my opinion, they have to be awful loose in order to detect play. The sway bar end links were in terrible shape, especially on the right side. They no longer fit squarely on the securing bolt (see below), and the rubber was flaking off. 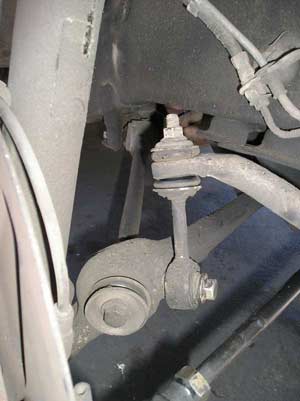 After some debate on this web site, I decided to go with Lemfoerder ball joints for approximately 45 dollars each. (The dealership wanted $67 for a new ball joint.) I've heard about the litany of complaints about other aftermarket ball joints. Lemfoerder is a German company, an OEM manufacturer, and considered top-of-the-line by the Mercedes and BMW forums. (You can google it and see.) Mine were made in Spain.

The sway bar end links are lollipop in shape. They consist of a pressed in bushing on one end, and two bushings compressed together on the other end. I sourced mine through the Volvo dealership for $26 each, plus 2 bushings per side, at four dollars each.

I obtained the frame rail swaybar bushings from the Volvo dealer, for eight dollars each.

These are the tools I used:

Do you need half inch drive tools? No... maybe not. But they sure are nice for this work.

Disclaimer: I accept no responsibility or liability for damage to your vehicle or injury or death to yourself or others.

Safety: there's nothing that we do on our cars that's worth getting hurt or killed. Please be careful.
A. I placed my car in park, and put on the emergency brake. I kept a cell phone close by in case I need to call 911.
B. I used four chocks on both rear wheels. After I jacked the car, I lowered the car onto a jackstand. I use the jack as a backup to the jackstand. After removing the wheel, I slid it under the frame rail. I wore goggles. Finally, before I started, I gave the car a good shove to check its stability. (This is earthquake country.)

1. A week or so before I start a job, I like to check it out and make sure I understand it, and have the necessary tools. On the designated work day, I don't want to be running around looking for tools or parts. In this case, I had previously noticed that the bolt securing the sway bar end links were blocked by the tie rod. A wrench would have insufficient leverage, and a regular socket wouldn't fit. I purchased a Craftsman 3/8" drive six point flex socket, which allowed me the use of a breaker bar to extract the bolt without removing the tie rod. (See below) After hitting all the bolts with PB blaster, I removed the old sway bar end link. 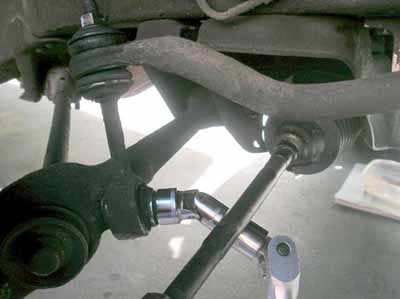 2. It is not necessary to remove the radius rod from the control arm. But it could make it easier -- see step 5, below. 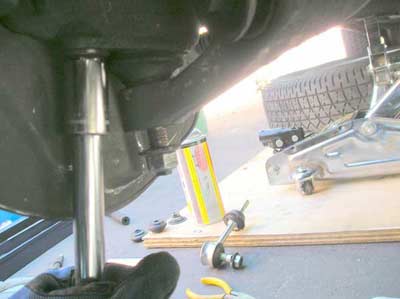 4. I used a three arm puller to remove the ball joint shaft from the control arm. [Sorry, I didn't get a picture of this. Too much going on.]

5. At this point an unexpected difficulty presented itself. The radius rod attached to the control arm together exerted a springlike pressure upwards. The suspension spring and strut tube exerted a pressure downwards. Sandwiched between these two forces was the very ball joint I was trying to replace. Even after the ball joint was freed from the control arm, it didn't just drop out, but was held in quite tightly. I experimented with the jack and other methods, but finally what worked best was a large pry bar. I braced against the frame and used it to push down the control arm, which finally freed the ball joint. This wasn't a big deal, but it went cheerfully without mention in the Haynes manual. Be careful that you don't damage a brake line with your pry bar. Also be careful that you don't crush a finger in the process.

Here's the ball joint, with displaced strut tube to left, and control arm on the bottom: 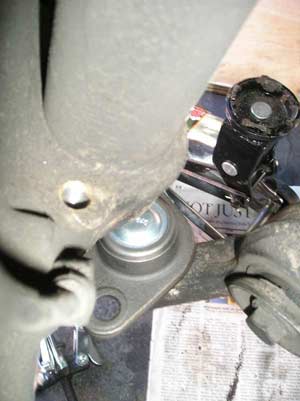 6. Installation is the reverse process, using the new nuts and bolts provided along with the medium thread locker. Torque to specification.

7. Now on to the sway bar end links. There's more than one way to install them. What worked best for me was to thread the new one into the sway bar, bolt the bottom bolt, add the top bushing and washer, then use the ever useful pry bar to press down on the sway bar enough to get the top nut threaded. Use thread locker. The bottom bolt is torqued to gutantight standards; the top bushings are compressed to approximately 42 mm from washer to washer. Reinstall the wheel to torque specifications.

Below you see the installed link before I tightened it the washers to 42 mm: 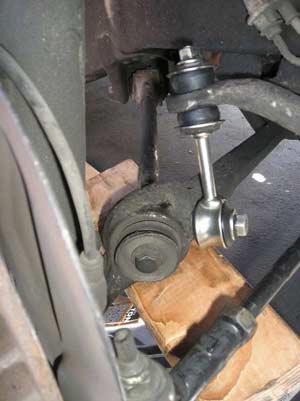 8. The sway bar saddle bracket bushings may be done either first, or last. They are easier to do with the car on ramps. They are split bushings, which means you need only to unbolt the brackets, remove the old bushing, replace with a new one, and reinstall using thread locker. Torque until tight. 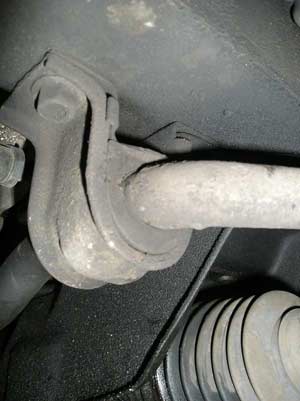 My old bushings were cracked, crushed and disintegrating. 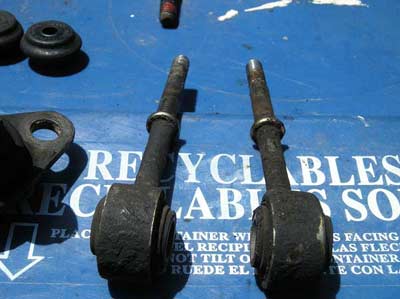 The old ball joints were loose to the point where I could easily move around the shaft with my hands. As you'd expect, this work made a noticeable difference in how the car drives. Much tighter, more supple, and flatter in the turns. Also, no more clunks while parallel parking. It was well worth the work. If you have or can get the tools, this is a good job for a do-it-yourselfer.
Last edited by writer100 on 19 May 2010, 14:12, edited 1 time in total.
1994 Volvo 940: 189,000 miles.
2008 Mustang GT convertible: 10000 miles. The garage queen.
Top

Good write up and pictures to go with it.

I agree with your safety procedures but, unfortunately, too many people think, "It won't happen to me." When I was working I dealt with two fatalities of people working under their cars on jobs which needed a lot of power to move rusted bolts. The first had been propped up on building bricks and the second was using the standard jack supplied by the manufacturer. Both had been found by their wives.

I am putting this in the Repair Database.

Bill, thanks. Your mention of the two fatalities is quite chilling. I have revised the post to emphasize that the car was lowered onto a jack stand. Although the jack is visible in one of the pictures, it did not bear the weight of the car while I was working on it.