SEMA 2012 Re-cap
It’s been exactly a week since we returned from Las Vegas and the SEMA show and I’m just barely recovering from the trip! 4 days of non-stop walking, talking, and gawking will take its toll on you even though SEMA is as much as vacation as it is a working trip for us. 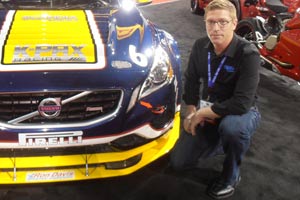 FS-R > BRZ?
This year the Scion FR-S was out in force and was arguably the most popular tuner car at the show as it won the award for Hottest Sport Compact. Surprisingly the Subaru BRZ, which shares the same chassis, was not nearly as prevalent. As always American muscle cars, old and new, abounded and we saw some really clean Mustang, Camero, and Firebird builds. Volvo didn’t display this year but the Polestar C30 was there in the Ohlins booth as was the K-Pax S60R race car in the wheel and tire hall.

An Aftermarket Change is Near
I’ve attended the SEMA show a number of times over the last decade and I can tell you this year had a different feel than years past. To put it simply the aftermarket is about to shift again. I’ve come to find that every 4 or 5 years there’s a shift of some kind that changes the way the automotive aftermarket operates. Sometimes it’s based around products, sometimes around thinking, and occasionally can stem from an OE level change. This year I saw more technology innovation than I had in years past and by quite a margin. The aftermarket is getting smarter, because it has to. Technology that was daunting and seemingly impenetrable is now mastered by the aftermarket and iterated in ways that are brand new. Case and point, plug and play CAN bus networks that are being implemented into vintage cars because the systems are fast, stable, and very capable of modular integration and tuning.

The down side
Manufacturers are responding to this by developing new ways to keep folks from modifying their cars. While I can understand this need to prevent unjustified warranty claims, the consequence of this is that owners are not able to make the changes they might like to once the vehicle is out of warranty. Tuning companies across the board are running into new encryption methods which are getting more and more complex. While encryptions can be broken with enough time and effort the latest PIN protected Eeproms prevent outside communication of any kind without the proper PIN. Will the OE’s provide the PIN to customers once the warranty period is up? If not, new vehicle’s sales may be impacted by how friendly the OE is to the aftermarket. Perhaps that’s a bit optimistic but I guess we can dream!

The Show Is Still... A Show
As much of a business convention as SEMA is it’s also a car show, and with that comes some outrageous builds as well as some really understated vehicles that can slip by without notice. It’s hard as an attender since at the end of day one the sensory overload causes you to start walking by cars that have between $50K- $100K put into them without even a glance, it’s easy to miss a diamond in the rough. My favorite car of the show (non-Volvo) was not the FR-S, even though I do have an affinity for the chassis, but an Audi R8 in the Nitto tire booth. The install was just so well done I couldn’t help but be impressed by the work. The BMW E30 in the Optima Battery booth was also one that caught my eye as I’ve got a soft spot in my heart for that brand stemming from my time working for them. Both cars were just simply elegant in the expression of the build and I can only imagine the hours put into pulling them off so well. 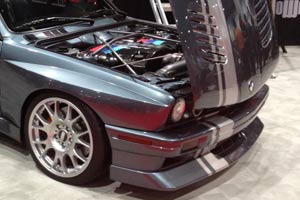 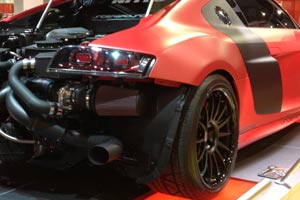 SEMA is such a large event with so many over the top displays, cars, and products it’s hard to come back to reality and not think it was all a dream. I’m still amazed at how many great cars and products I walked right by without a thought just by virtue of the simple magnitude of the event. Check out the rest of the pics we took over on our Facebook page to get a sense of the trip!


[list][*]Questions, comments, arguments and freakouts accepted and encouraged. Really. Lucky WANTS to answer your questions.
[*]If you want to remain anonymous, email me your question or comment and I will post it as "Anonymous User".
[*]It takes Lucky and me several hours combined to bring you Fast Fridays. Your questions and comments validate FF's value.
[*]I write paragraph headlines, and sometimes article headlines. Yell at me if you find these not to your taste.
[*]Same thing with italics and bolds , they're all mine.
[*]Cams and turbos and MBCs and chips and... whoo![/list]
Matt
Help keep MVS on the web -> click sponsors' links here on MVS when you buy from them.
Also -> Amazon link. Click that when you go to buy something on Amazon and MVS gets a kickback.

Lucky, thanks for the SEMA report. Question about the PINs: are they unique per car? Or per model? Or somewhere in-between?

This PIN stuff is bad news

.
Help keep MVS on the web -> click sponsors' links here on MVS when you buy from them.
Also -> Amazon link. Click that when you go to buy something on Amazon and MVS gets a kickback.

So far the PIN is unique to each car and that means without that PIN you aren't going to be able to easily access the EEprom for tuning. However there is hope in two forms....

1. Emulator boards are a viable option to overcome this and in some cases can be 'snap back' so there is no soldering.
2. 'Tickling' the board supply lines fast enough can get us into the base function set of the eeprom and from there gain access.

I'm hesitant to say too much but short answer is this, so long as there is a will people will find a way

ARD-Lucky wrote:So far the PIN is unique to each car ...

Lucky, ugh, that's what I feared.

I'm familiar with iPhone and other electronic device unlocking, and I understand why you can't write what you know.

Everyone, these handheld devices are probably 5-10 years ahead of cars. I think the issue regarding who owns access to products we purchase (iPhones, cars, etc.) will come to a head in that same timeframe (pure coincedence): 5-10 years.

For those not really "in the know": start here for a broad overview. If it's surprising to you that you are breaking the law if you unlock your tablet computer, you're not alone. And if you think that the illegality of doing so is idiocy, you're also not alone.

Full disclosure: I'm a member of the EFF.

People outside the US, and you're the minority here thus my writing is oriented generally to US residents, you'll have to check the laws of your country.
Help keep MVS on the web -> click sponsors' links here on MVS when you buy from them.
Also -> Amazon link. Click that when you go to buy something on Amazon and MVS gets a kickback.