Piggybacks and SAFC (Super Air Flow Convertor)
When I started tuning years ago the only thing approachable was using a piggyback ECU to adjust fuel and timing on my LH fueled RWD Volvos. Of all the cars I put piggyback on, my 242 was my favorite and after the swap from the mechanical K-jet injection to the electronic injection of LH2.2, I was ready to start playing!

Nice Power... but is That Fuel I Smell?
Increasing the boost by adjusting the wastegate, or in my case using a manual boost controller, was the easy part and instantly netted a nice power increase. However it was over fueled badly in upper RPM’s and detonated in the midrange, since the power increase was substantial the ignition computers default timing map was now too aggressive for my setup. So a piggyback was the answer!

Back to basics
To understand the use of a piggyback ECU or a SAFC (super air flow convertor) we need to understand a bit about the factory ECU. In this case we’re talking about the LH versions of Bosch motronic fuel system but ultimately this applies to just about all electronic engine management systems. The ECU receives a varying voltage from the MAF and converts that to a particular air flow value. From this information and other inputs like RPM, coolant temp, and throttle position, load can be calculated. With load known the ECU can look up a table to compare the load and RPM and apply a proper amount of fuel. The ECU then compares the projected air fuel ratio, load, and RPM to calculate an optimal ignition angle and then fire the ignition coil to make a spark that will ignite the mixture. This happens incredibly rapidly and hundreds of times per second. 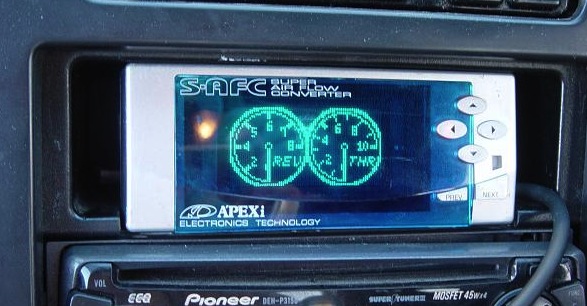 Offset
"Piggybacks" are also known as offset devices since they "offset" the signals that the ECU receives. The piggyback is typically wired in between the ECU and the MAF/Crank sensor so that it can intercept and then change the signal that is provided to the ECU. In essence the piggyback "lies" to the ECU, mis-reporting the values from the MAF and crank position sensor. By reducing MAF signal to the ECU it will be interpreted as though less air is entering the motor and consequently less fuel will be added. By altering the MAF signal we can alter the fueling. For ignition timing the piggyback intercepts the signal from the crank sensor and delays it slightly, which in turn delays the ignition coil from making a spark which ultimately retards the ignition timing. Advancing timing can be done with more sophisticated piggybacks but many won’t allow for timing advancement, only retard. In the case of the piggyback I was using this system provided a very nice software interface that allowed for real time editing in 2 & 3 dimensional maps so it similar to a stand-alone engine management system with respect to interface and tuning screens.

Back to school
For earlier more rudimentary fuel systems like LH 2.X a piggyback is a viable option for tuning, it’s not the only way or even the best way but it does have its place in the performance world. Earlier LH systems only used O2 sensor values to trim fuel injection at idle and under light load. Above light load the ECU would use the pre-programmed values and disregard O2 input since the nature of a narrow band O2 sensor is to be useful only within a very narrow range of air fuel ratio measurement. Increased fuel enrichment from increased load creates fuel ratios that are far outside of the narrow band O2 sensors ability to measure so it is ignored once the engine transitions into boost. This means that the ECU will not "learn" around the adjustments that the piggyback makes to incoming sensor signals.

Piggbacked into a Corner
As O2 sensor technologies increased, and better resolution became available, the narrow range of sensor measurement started to widen a bit. The O2 sensor was still quite narrow in its measurement range but programmers and calibration engineers learned to code around this and take better advantage of O2 sensor input. Now the ECU was looking at the O2 sensor during far more engine conditions and using that input to trim fuel injection in all but full load conditions. This made the use of piggybacks harder as the ECU could monitor fuel trims and compensate for the variation that the piggyback was introducing. This rendered the piggyback nearly obsolete. Some clever tuners utilized extra map inputs and output controls to switch the O2 sensor input to the ECU with a pre-programmed signal and this worked... for a while.

Wideband O2 From the Factory!
In 1999 Volvo introduced the ME7 engine management systems which came equipped with a wide band front O2 sensor from the factory. These new wide band O2 sensors could measure the entire range of typical operating fuel ratios and as such the ECU never had to rely on pre-programmed value for fuel injection but could always refer to O2 sensor input to fine tune its air fuel targets. Now the piggyback was destined for the dust bin... at least so we thought.

The New Style Offset
The idea was hatched to use the piggyback to control an extra injector and in turn activate that injector at certain load points where more fuel was needed. Due to the performance components that were installed there were lean spots at different engine loads that the factory ECU was not expecting, so the piggyback ran the extra injector that would spray into the throttle body and counteract the lean spots and the factory ECU would never know it. This worked quite well but like my early 242 we still had timing issues from the dramatic increase in load and the piggyback was just not up to the task to handle that. This ultimately ended the viability of piggyback ECU’s for daily driver road going cars.

While this Fast Friday topic isn't as sexy as some of the others, the information is as good or better than any of the others IMHO. It shows us a little of Lucky's early years I think, back when he "cut his teeth" on automobile tuning. Am I right, Lucky? Do you look back with fond memories of tuning the 242?
Help keep MVS on the web -> click sponsors' links here on MVS when you buy from them.
Also -> Amazon link. Click that when you go to buy something on Amazon and MVS gets a kickback.

Honestly some of my best memories of tuning are from those days and even earlier back when it was the carbureted '72 Chevy Nova I really began my learning on. While today's EMS systems are more complicated they're actually easier from the tuner perspective since you can command a result and the ECU simply carries it out... assuming you know what you're doing.

All things considered, technology serves us even if the learning curve is steep. Except for my Fios router... it has no purpose other than to irritate me