Sorry for the long post but I'm hoping someone can help me out.

Recently I purchased a 2004 XC90 with a T6 engine. On the drive home, I noticed a significant amount of white smoke coming from the exhaust when I’d let off the accelerator or come to a stop. I did some quick googling and saw several threads suggesting either the seals in the turbo were leaking or the oil trap was clogged/failing.

I drove the car for a few days and it seemed to perform fairly well. I didn’t feel like it had tons of a power but it didn’t feel like it was underpowered either and I assumed that was normal. It was consuming oil fairly quickly (the white smoke) and I always needed to crank the engine for about 10 seconds before it would start.

I took the car to a Volvo mechanic to check out and, hopefully, to fix it. He told me when he took the car out for a test drive that the check engine light came on and the car started driving really poorly. At the garage he decided to run a compression test and found that all the cylinders had about 60-65 psi except one with only had 30 (normal is around 180 I think).

I appreciate him not trying to waste my money but the body and interior of the car are in great shape and, at this point, I’d have to sell the car for a loss. I’d like to fix it but I’m not going to spend $4000 to have it done.

Thinking more about this makes me ask some questions.

First, does it make sense for the compression to be so uniformly low (excluding the one outlier)? It doesn’t seem right to me that they would all go bad so similarly. I wonder if the engine has gone into some sort of “limp mode”. Do these cars do that? Does this make sense to any of you?

Second, I’ve been told that this generation of T6 is not a very good engine and even if I replace/rebuild it, I’ll still have to deal with the problems inherent with this engine. Is it really that bad? If it is, can I just install a newer generation T6 or even a V8 from a 2005 to have a more reliable engine? Can it just bolt in or is the configuration totally different? I’d be more willing to spend the extra money if I’d have a more reliable vehicle.

I’d appreciate any thoughts you all have about this. Do you think there’s something that’s being overlooked or does the mechanics diagnosis sound right to you? Do you have any alternatives to getting the car working well again or, if not, any suggestions for getting more than scrap value ($300) out of it?

Volvo doesn't make a bad engine. The 2.9 na and turbo are great motors. On you car the weak link is the transmission.

Compression is really low - surprised the car actually runs at all. I would try a leak down test. Also check your timing belt - maybe it broke and caused some damage - but that seems doubtful as things are fairly consistent.

What codes did he get?

How many miles on the car?

What is the condition of the oil? I fear that the oil in this car was never serviced regularly.

If you want to work on the car here is what I suggest. Start with the PVC (oil trap) - I would also drop the oil pan and see what it looks like and give it a good cleaning. You need to clean out the passage from the oil trap to the oil pan - which I am confident is caked and blocked up pretty good. The sealant for the pan is a special type, but can be found for around $10.00. Unfortunately the oil trap is around $90. You can try and clean the rest of the parts to keep costs down. Replace them as needed. So for around $100 and a good bit of labor you can have the PVC system sorted. For $150 you can do the entire PVC system correctly, but as you may have other issues it is hard to spend good money at a potential bad. Cleaning the PVC oil trap has had mixed results, but if you want to waste your time that is one other approach. You could try putting on a used PVC trap found at a wrecker.

You really need to sort the PVC system first - that is where I would start. Until it is sorted correctly you will have all sorts of issues - like the massive oil consumption (and soon oil leaks from the seals).

It is possible that once the PVC system is sorted out the engine will stop smoking. I would run some Seafoam in the oil for a few quick oil changes to clean out the gunk on the top of the engine (assuming you drop the oil pan).

At this point I would see where you are at with the compression numbers, and if they are good send me a PM and I may have a turbo for you for price of shipping.

This is all high level - more instructions can be provided if you decide to proceed. In order to get out of the car with a minimal loss in its current situation you have to do the work yourself. Otherwise if you are going to farm it out - the cheapest route is a used engine.

Again the 2.9 T is a great engine - the transmission is the problem. I fear transmission problems after an engine transplant more than a bad engine.

No you cannot do an engine transplant of another engine without changing a ton of computers, keys ...

If you cannot do the work yourself cut your losses and take the scrap value.
Top

Engine runs normal but weak, puffs of smoke and low compression are the symptoms of worn or stuck piston rings.

One could confirm this by placing a table spoon of oil in the cylinder (Wet Compression test).
If the oil cause the compression to rise the rings are not sealing.

You could pull all the plugs dump some Seafoam in each cylinder, let it soak overnight then crank engine to push out the Seafoam, reassemble, start and run it until it stops smoking. IF you are lucky your piston rings are stuck across board. Not real likely but not unheard of. The Seafoam eats away the carbon and unsticks the rings.

CN90 - I have been working on some windows and had to train myself to use PVC as I was constantly putting in PCV. Now I am broken.

RickHaleParker - I agree fully with your thoughts. That is why I recommended fixing the PCV first as that is pushing excess oil into the pistons from the top side. The Seafoam treatment for a few changes may free up the piston rings. I know it works as my brother did it to his Toyota with great results. Of course that assumes the compression issue is related to stinking rings.
Top

The smoke is clearing...

It took a few weeks to get the parts, tools and time but I finally got to work on the car. I pulled the PCV trap and decided to go ahead and replace it as it seemed completely caked and clogged. While I had the trap out, I put a tube in the passage to the oil pan and blew on it. I immediately blew a clog out of it and then could hear the oil bubbling. I cleaned that passage and the other trap connections as well as I could and put it back together. I'll do a few drives followed by oil changes this week.

Like RickHaleParker suggested, I added Seafoam to each cylinder and let that soak for a couple of days. When I got it back together, it smoked like crazy for awhile but the smoke has all cleared up and I don't see any at all. Maybe I should do that again.

The car still has the same poor power that it's had since I got it back from the mechanic. I'm wondering if he accidentally disconnected something that's causing the poor power as it wasn't this bad before I took it to him. Maybe a turbo vacuum or something...?

I'm not really sure what I should look at next. I've ordered a compression tester, so I'll check that next to see if it's the same. I still have a check engine light on but I haven't been able to pull the codes yet. Once I get those, I'll update this thread.

Thanks for the help so far!


Here's some answers to other questions that came up:

Hope you ordered one with a metal extension and not just a rubber hose.

If you use the a rubber hose extension in the deep Volvo spark plug well, the metal end of rubber hose may start slipping when you go to take it out. It will not thread out when the metal end is slipping and there is no way to get a tool down the well.

You can get the metal extension separate. Probably a lot of readers here that could benefit by adding one to their compression tester kit. As for most Compression kits do not come with one. 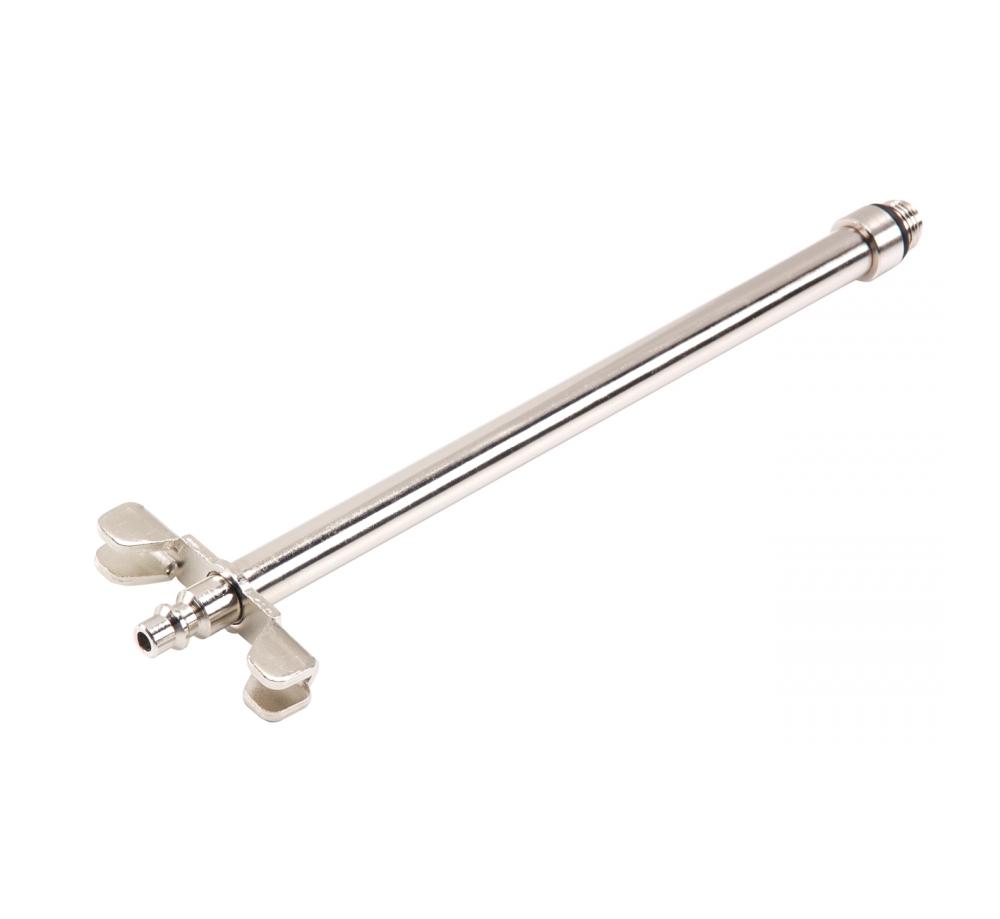 RickHaleParker wrote: ↑Mon Dec 16, 2019 2:38 pm Hope you ordered one with a metal extension and not just a rubber hose.

Thankfully the order was not processed when I saw your message and I was able to switch to a kit that has the extension. I ended up ordering this cheap (probably) Chinese one:

Thanks for the the suggestion!
Top

Two items - GM makes a fluid for servicing the top end which I used on a BMW. Worked very well.

Just be careful that too much solvent removes your oil protection when poured from the top.

For my brother's Toyota, it is a slow process of 5-10k miles to clear the issue up, if it can be cleared. Just keep the SeaFoam, or what ever flavor, in the oil, and increase your oil change intervals. 2-3k miles at first - you will know by what the oil comes out looking like.
Top
Post Reply
10 posts • Page 1 of 1