Overview
This was part of my 2004 V70 R's 90k service, so it all happened in a professional shop with pro tools. My V70 R's Volvo Haldex system was used on Volvos from 2003 to 2005 model years, so you may apply the concepts from this tutorial to those models.

A Warning
Like all maintenance where you put your car in the air, block the wheels and use redundant support objects. For instance, if you jack the car up and suspend it with jack stands, throw something else under there in case something fails. I'm sad to report that a family friend and father of three girls died when his car fell on him while he was under it performing maintenance. Please take safety seriously.

This is a good topic on safely jacking up your Volvo. The model shown in the photos is an 850 and different from your 2001+ Volvo, but the concepts are the same.

Crush Washer
Use this copper crush washer! It's very important to not re-use crush washers, or worse, go without a washer.

Haldex Fluid Evacuation and Fill
Sorry to be anti-climactic, but there's not a lot to this subject. Like the bevel/angle gear fluid change tutorial, it's easier if you can get your car up in the air, but simple either way. You must unscrew the drain plug, suck out the old fluid, and put the new fluid in. The only gotcha is using the correct fluid. I recommend using Volvo-recommended fluids only. Volvo Haldex fluid part # is 30759648. 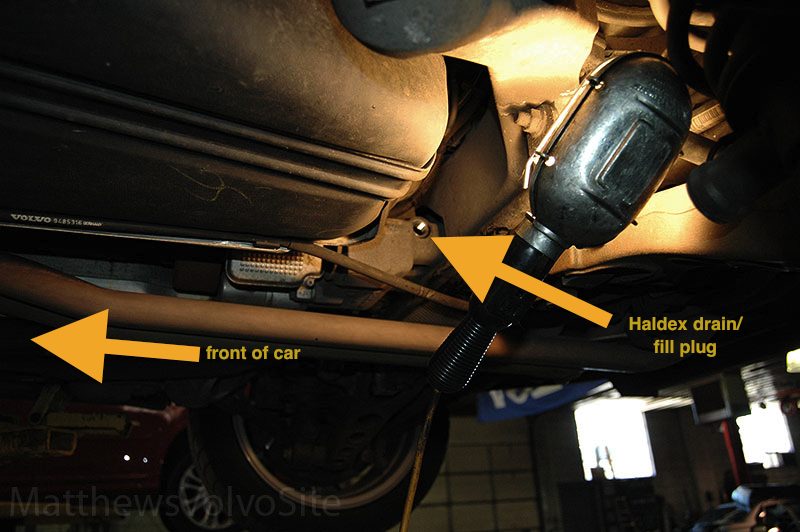 Haldex drain plug location faces the side. You literally suck the fluid that's in there out, and put in the new fluid. 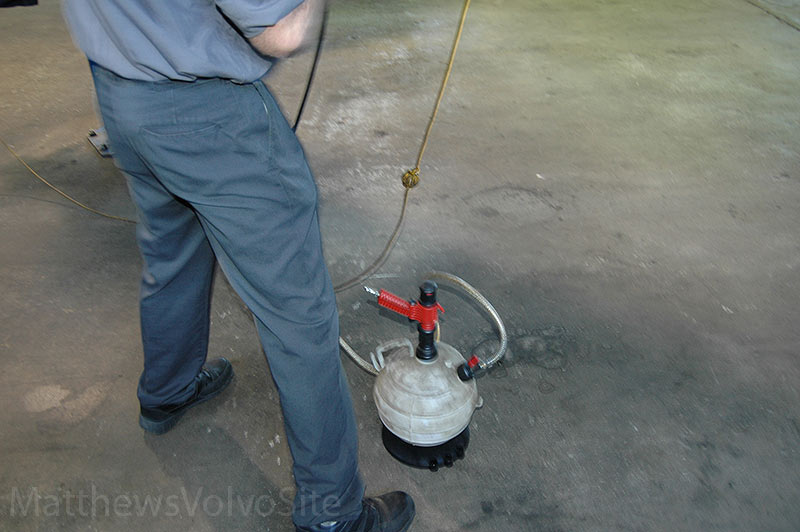 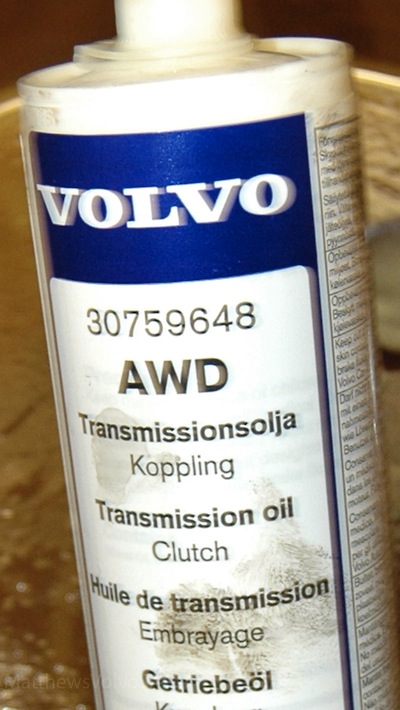 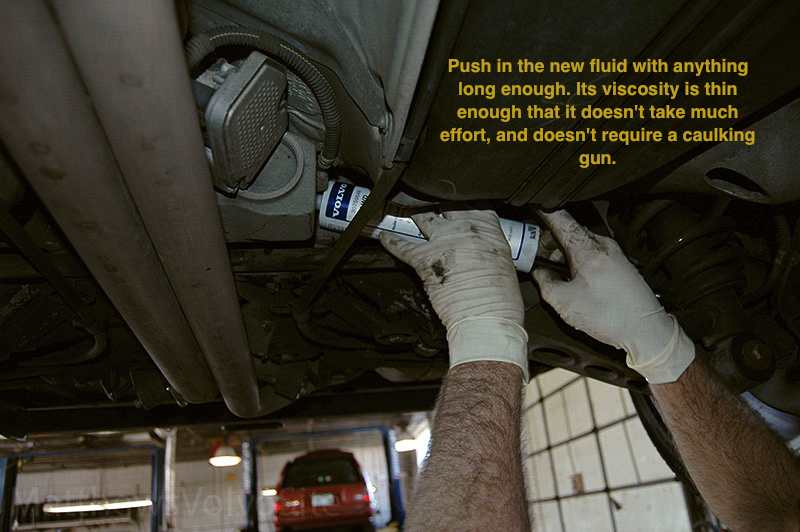 Push in the new fluid.
Help keep MVS on the web -> click sponsors' links here on MVS when you buy from them.
Also -> Amazon link. Click that when you go to buy something on Amazon and MVS gets a kickback.

Since you've added this to the repair database, here's an excellent how-to on how to replace it on the pre-Haldex AWD systems. More or less the same procedure (different location of the drain plug), but still an important one

Actually they're two different fluids. The Haldex AWD fluid is independent of angle/bevel gear fluid, and is an additional item that the mechanical systems didn't have. Yes, I was surprised too when I learned of this.

As Dave at Volvo Specialists explained to me, the Haldex fluid is responsible for activating the clutch plates that then transmit power to the (rear) bevel gear, and then rear wheels. The driveshaft turns, but isn't used until the electronic system activates the Haldex clutch.

I have pics of the 2003+ AWD bevel gear fluid replacement, and will get those up here soon.

As for the PDF you linked to, we actually do have it in the VRD. It was mislabeled "Beveal Gear Maintenance", and was poorly categorized. I just made it 10x better, adding Dave's thoughts on the pre-Haldex system, and a bevel gear story.

Bevel Gear Maintenance on 1997-2002 Volvo AWD Cars
Help keep MVS on the web -> click sponsors' links here on MVS when you buy from them.
Also -> Amazon link. Click that when you go to buy something on Amazon and MVS gets a kickback.

A great write-up on fluid changes! Thanks forum members.

I wanted to add my two cents about how important the right fluids are. I bought a 2004 XC70 about a year ago and took it to an indy mechanic who specialized in Volvos. I asked them to change the haldex, angle gear and rear diff fluids. The car has 85,000km.

One of the slow witted mechanics thought that it would be a good idea to put 75w140 gear oil in the haldex. They also used the 75w140 for the angle gear and rear diff. Shortly after the fluid change I noticed that the haldex was leaking. Took it back to the shop twice and spoke to the owner who admitted that his nucklhead employee put in the wrong fluid. We figured out that the leak was coming from a small vent hole in the bottom of the assembly. Best we could figure out is that the increased pressure from the wrong fluid or the overfilling likely caused the excess to seep out the vent. We changed the fluid twice and put in the correct haldex fluid. It still seems to be seeping out the vent hole, but I have read elsewhere that the haldex is sensitive to overfilling. Fluid is no longer pooling beneath the car when parked, so the rate of seepage has at least gone down.

The other issue now is that the angle gear is leaking. I understand that this is a common issue on these cars, but no doubt using a heavier fluid hasn't helped things. For now I will keep my eye on the fluid level until I can take it back to the indy shop and show them the issue.

Moral of my story is pay the extra money and take it to the dealer so that the correct fluids are used. Otherwise buy the fluids from Volvo and do it yourself. These are expensive parts! Probably looking at $3000 for the angle gear and $3000 for the haldex.

There is another great write-up on the swedespeed forum about changing these fluids. They have also posted the Tech-Net notes showing the correct fluids:

The seal between haldex and diff is a double face seal. When it is seated the area between the two seals of the double seal aligns with that vent hole. If either seal leaks it will prevent cross contamination of fluids. Of course, when the same fluid is put in both components that isn't a concern....

The 75w140 gear oil in angle gear was not a contributing factor. I only used 75w140 in angle gears on viscous coupling AWD models because that oil gets HOT and it thins down to the viscoisty of water in use. IT never caused any of those cars to leak.
Your angle gear just reached the limit of the number of times the anerobic sealer would take the growth-shrinkage cycles of normal use. That is why VOlvo came out with a new process for sealing those with high torque RTV instead of hardening anerobic.

Haldex oil from Volvo now comes in 1 litre containers so you have to put it in with some other container.
I use a mason jar with a lid with two holes. In one hole is a 1/2 OD-3/8 ID clear vinyl hose inserted and sealed long enough to be right on bottom. The other hole is sized for a piece of vacuum hose inserted just enough to be through the lid. Attaching a vacuum pump to the hose allows this jar to be your capture can when you insert the hose to the bottom of diffs, angle gears, and haldex units. The suction will pull the old oil into the jar. IF it gets close to full. stop pump, open jar, and dump. Then go at it again.
Pull out the vac hose and clean the jar then pour in your gear oil and it becomes the install vessel with hose in the unit to be filled and air applied to the hole in lid. Be careful when airing it. This is a great time to use that aggravating regulator on your air compressor and turn it down to 25 psi.
Top

For cross-reference purposes, see the link below; whether it is XC70, V70R or XC90, there are a lot of similarities.

I have seen instructions for the Haldex unit oil replacement that you are to remove 40 ml after filling (till it overflows at level). Do you fill and close or fill, remove 40 ml and close?
2004 V70 AWD Wagon 2.5L L5 DOHC 20V TURBO 250k mi

Here's what I did:

Fill
close
make the rear wheels turn under driveshaft power (e.g. put it in gear while supported with all four wheels up, note rear wheels turning)
refill until spilling out (may not accept much at all)
remove 100 mL
close