I'm having trouble finding the source of my most recent oil leak. The oil is showing up on the back of the engine, drivers side, in front of the turbo. It looks like the classic rear cam seal oil leak.

Except both of my rear cam seals are dry. They were replaced with I serviced the PCV recently, because the PCV pressure blew them out. PCV is good now, balloon is sucked in.

There is no oil on top of the engine under the spark plug cover. The seam between the top and bottom halves of the head is dry. The oil return lines from the turbo are dry. There is some oil on the coolant return line, but I think that is blown there from the back of the engine.

There is oil on the exhaust stud bolt closest to the driver's end of the engine. To me this suggests that the leak is above the head/block joint. Does that stud tap into an oil passage of some sort?

What else is up in that area that can leak? Anything I could have bumped/damaged when I was servicing the PCV? I had thought that fixing the PCV and replacing the cam seals would take care of this leak.... Pics attached.

Nothing under the spark plug cover?

What about the bolt here? 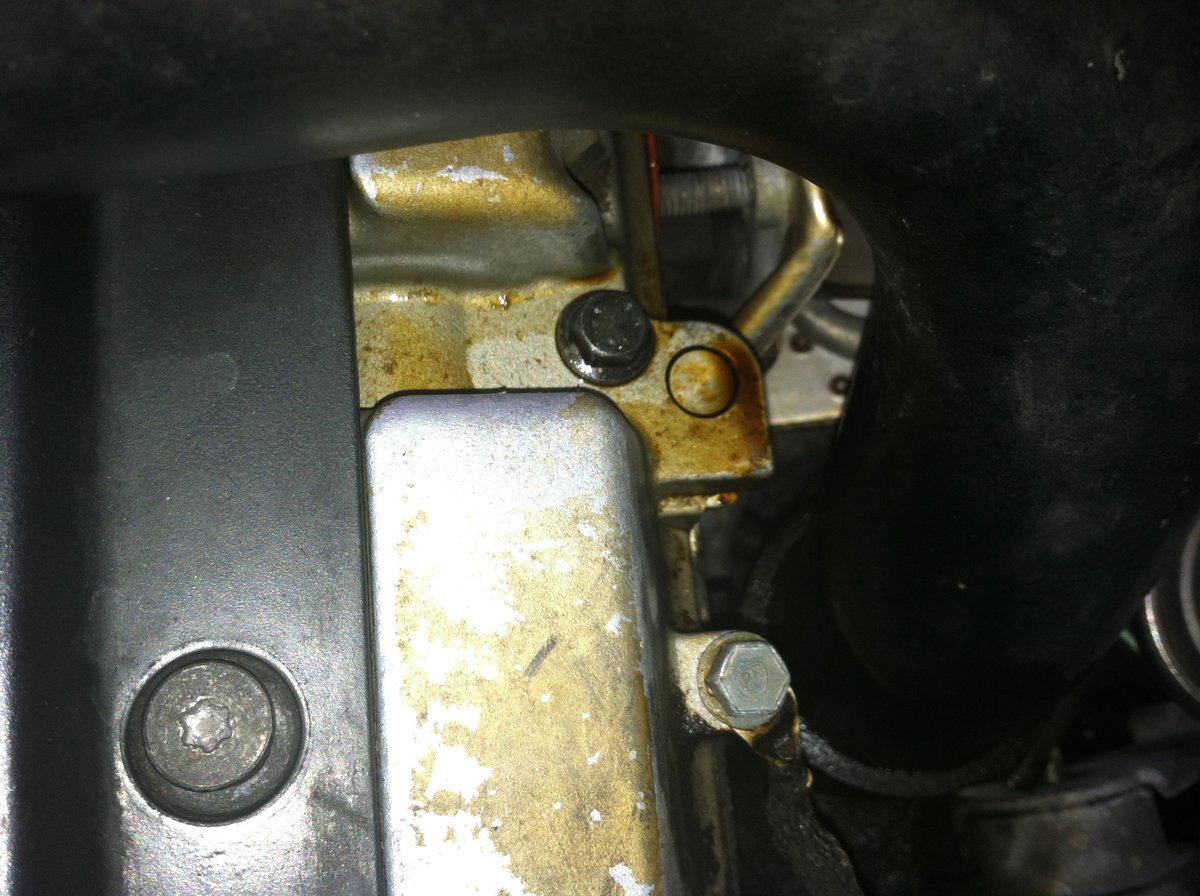 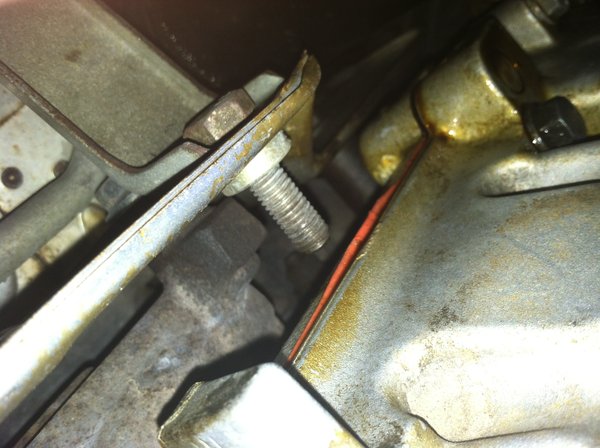 Sorry for disappearing for awhile...I was out of town.

There is no oil underneath the spark plug cover, and that bolt in your photo is dry.

Here are some pictures showing the intake & exhaust cam seals are dry.

I removed the engine support bracket to get a better look at what's going on. It appears that the oil is leaking from the exhaust stud closest to the driver side of the engine. Here's some photos.

Oil seen coming from stud. That's a mirror placed opposite the stud. It's hard to see from the photo, but the stud itself is covered in oil, and typically has a drop at the end of it.
Small_0005.JPG (64.11 KiB) Viewed 1408 times

The nut was not that tight. The Hayne's manual indicates the torque spec is 18ft pounds. It might have been a little under that. Hayne's also says when reassembling: "Return any studs that were removed with their nuts back to the cylinder head, sealing them with suitable thread sealer."

Does this stud penetrate into an oil passage in the head? Should I try to remove the stud and replace it with "suitable sealer"? What sort of sealer would be suitable? Can I get the stud out without removing the exhaust manifold? Using the "two nut" technique?

For the record, it's leaking about a quart every thousand miles.

What do you think? Thanks for any help!

I just wanted to report back with the results. Either tightening the stud, or the gasket sealer, or a combination of them both did the trick. It's been a couple thousand miles and my car is leak free--at least for the moment.

So we can add this stud to the list of possible oil leak sources in the "above the turbo" area of the engine.

Thanks to everyone for all the suggestions.

I'll have to think how to document this one

Sure, the stuff I used was Pematex 3H Aviation Form-A-Gasket Sealant Liquid, Item #80019. It is a shellac based, tarry, goopy liquid that comes in a container with a brush in the cap to spread it with.

I used it mostly because it was already on hand from a rebuild I did on an aircooled vw engine. I chose it from my box of leftover gasket sealers--rtv's, volvo anaerobic pink stuff, etc--because I didn't think I could get the hole for the stud very clean if there was oil coming out of it, and it seemed like this stuff would seal the best in the oily environment.

It worked in any case, but I suspect that any of the sealers in my box of leftovers would have done the trick.

Another update. After about 4000 miles, it started leaking again. I took the stud out again, once again it wasn't overly tight, and showed no sign of the aviation sealer I applied to it. I cleaned everything off with carb cleaner, and tried again with red hi-temp RTV that I had on hand. Hopefully it will last longer. If it doesn't, what is the proper stuff to seal this with? Threadlocker?
=====================
Red Red '96 855R, 169k
Top
Post Reply
12 posts