<t>There are several references to V70 radiator removal and replacement including notes from the factory manuals. From what I can find, every source says to remove the radiator from below the car after raising the front of the car. There is also recommendation to use two people to remove and replace the radiator from the bottom.<br/>
Since my 2001 V70 T5 developed a leak in the top hose neck, I started researching how to replace the radiator myself. The recommendation was to raise the front of the car and remove the radiator from the bottom. Measurements showed I would have to raise the front about 12 inches to get the radiator out the bottom. I would also have to do all other work from the top with the car raised 12 inches. In addition, I would need a helper. None of this was attractive to me since I do not have a lift or a readily available person to help. <br/>
I decided to consider replacement of the radiator from the top. The obvious part in the way was the steel brace across the front supporting the top of the radiator. This and other parts did not look hard to remove. I decided I would try the top removal process.<br/>
Top removal was a success. The normal parts for radiator replacement have to be removed - fan, intake air hose, electric cables, aftercooler air return tube, air tube for the electric controls on left side, inlet and outlet radiator hoses and transmission cooler tubes. The steel cross brace has many bolts , but these are easy to remove and the brace lifts off. Of course the coolant must be drained. Catch it to reuse or just replace with fresh coolant. Also catch the small amount of transmission fluid lost. Measure the transmission fluid drained and replace the exact amount. Catch and replace is easier than trying to read the transmission fluid level on the dipstick. <br/>
There are many small fasteners used. Mark them with tape and marker or some other method to identify where they are used.<br/>
I found the bumper has to be removed, but this was not difficult. There are several plastic clips at the top front, two clips at the back lower corners, two screws at the center back, two bolts under the clip on bumper trim and quick connects for fog lights.<br/>
The engine splash pan has to be removed and the air duct in front of the radiator. These were not hard to remove from the bottom.<br/>
With these parts removed, I was able to separate the radiator from the aftercooler and the air conditioner condenser. I hung these two parts from the bumper beam with nylon tie straps to support them when the radiator was removed. <br/>
The radiator came out the top rather easily. The tight fit required a bit of wiggling to clear everything. Don't force it and damage something. <br/>
Compare the replacement radiator to the old radiator. They should be the same in all major details. In my case, some of the fasteners were molded into the plastic instead of clipped to the plastic.<br/>
Replacement of the radiator was harder. I had to slightly bend the electric conduit guide on the left side to get a little more clearance for the radiator. Once this done, it fit with some more wiggling.
the rest of the parts are replaced in reverse order of removal. Take photos as you remove parts as a guide. Details can get fuzzy if it takes a couple weeks to get everything back together. Total time is estimated as 10 -12 hours. Results will vary.</t>
2001 V70 T5, 1986 244DL, 1983 245DL, 1975 245DL, 1959 PV544, multiple parts cars.
Top

Great work and thank you for write up.

The only thing I will emphasis and/or add to your write up, although it may not apply as much to removing it from the top, is try to minimize or eliminate twisting and flexing the replacement radiator. When researching removal on an XC70 I saw many owners have radiators with shortened service due to leaking at the seams, most likely caused by the twisting and flexing.
Top

I did my second replacement In four hours.

I had replaced the troublesome fan housing bolts with SS, as well as the sandwhich bolts with 10 mm hex and locknuts. I cut two 19 mm holes in the cooling fairing to access those bolts
Empty Nester
A Captain in a Sea of Estrogen
1999-V70-T5M56 2005-V70-M56 1999-S70 VW T4 BMW
Link to Maintenance record thread
Top

I plan to do this tomorrow on my 2001 V70 T5, glad to see that getting the radiator out the top is possible. it suddenly developed a leak by where the upper hose attaches, I thought it was just the hose, but the new hose didn't stop the leak.
I also will be working alone and It sounds like you were able to do it just flat on the ground, is that true?

Much easier to drop out bottom. You can get it to ground, then use the car jack to jack up and ease out one side.

Do squirt those fan screws with PB Blaster a week before, the heads are usually rusted off, though. Replace with cheap SS from Lowe Quality or Home Despot
Empty Nester
A Captain in a Sea of Estrogen
1999-V70-T5M56 2005-V70-M56 1999-S70 VW T4 BMW
Link to Maintenance record thread
Top

Agreed. If you remove the bumper cover, I'm not sure you even have to jack the car up. I had mine on jack stands, but with the bumper cover removed, you drop the radiator (or entire pack of radiator/IC/condenser) and angle the bottom of it forward and slide it out.

The tedious part is disconnecting hoses and stuff. 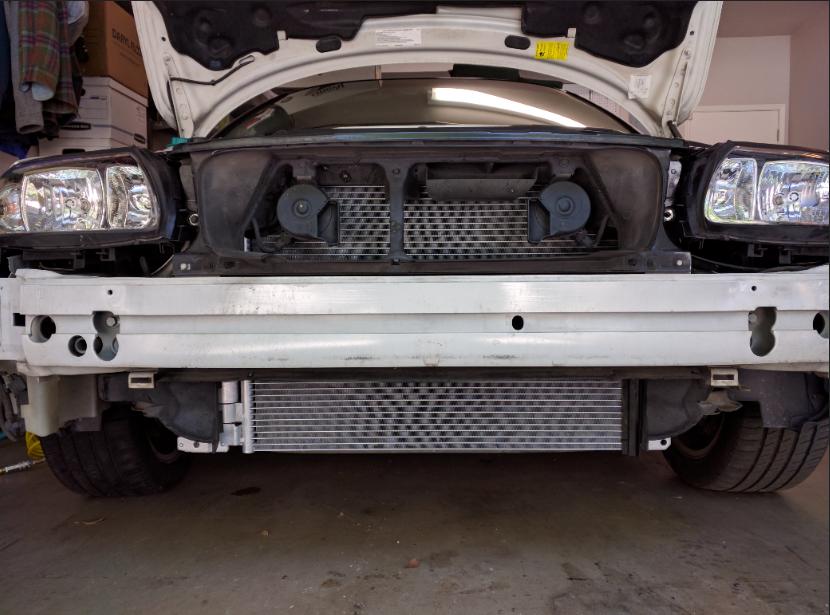 My car I bought at the auction just had the radiator replaced the day before because upper hose inlet was also cracked. Seems like a common failure point.
2006 V70 2.5T Geartronic Silver Black Leather 131,000 Miles
Top