Sunroof leaking. Flooding back of car.

Sunroof leaking. Flooding back of car.

I have a 2007 XC90 that's been enduring some heavy rains while parked slightly uphill. Sunroof is closed, but plenty of rain is coming in and leaking through the 3rd row shoulder seat belt slit and collecting in the battery tray/cover. When I open the sunroof and pour water in, it freely flows through both seatbelt slits.

I'm finding little to no info online about this issue for the XC90 (In fact, I can't even confirm that the rear drains even exist!), plenty of owners seem to have problems with the front drains clogging. I've checked my front tubes and they are operating fine.

I realize there must be a clogged rear drain in there somewhere, but can't figure out how to access it. Can someone enlighten me on how to remove the covers for the C/D pillars (see pics - forgot to focus one, but you get the idea) and/or the center rear hatch section? Or even what these panels are called by volvo? Maybe I can replace the sunroof seal...or seal it shut permanently? 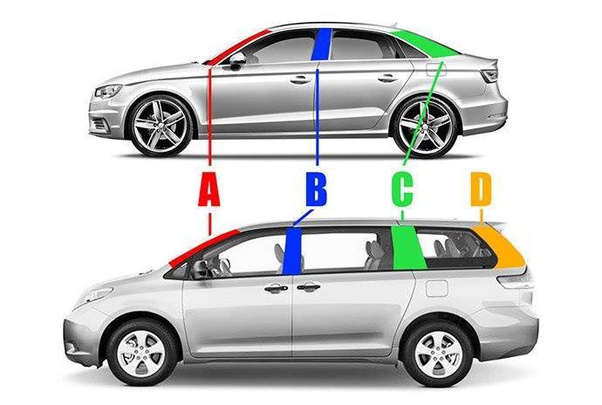 These users thanked the author RickHaleParker for the post:
jerryv

Can anyone confirm there are rear sunroof drains are under the B pillar on the 2007 XC90? Water is coming in from my D pillars. I'd like to be sure Im going into the right area before removing any of these panels since it looks pretty annoying to get in there!
Top

I can confirm the rear sunroof drains on a 2004 V70 run down the back of the C pillar (behind the back doors) and exit at the forward area of the rear wheel well. To gain access, the little filler piece between the back seat upright and the side of the car has to be removed. The hose to me is a flexible plastic since it is somewhat see through and runs down behind the plastic trim between the back door and the forward area of the rear side fixed glass. The body penetration is a rather soft rubber.

I had two problems:
(1) The sunroof drains were clogged with fine dirt allowing water to escape from the sunroof gutters in the tray leaking onto the headliner which it stained and then finding its way under the back set. The trunk area remained dry.

(2) The drain hose did not fit tight into the female portion of the rubber body penetration. There must be a flapper on the outside or it too was clogged which was keeping water from easily exiting as the water escaped from the joint and also found its way to the area under the back seat.

And Volvo placed a large electrical multi connector immediately adjacent to these drains! How smart was that..... Luckily I have not experienced any electrical issues. I'm not sure what the connectors support.

Since the back sunroof drains are not accessible, I cleaned them from the bottom up. So I backed the car on a hill. I cleaned and flushed the front drains, which were also clogged, first. That clog was realized when the front passenger floor mat was floating after a terrible thunderstorm. ADVICE - pull the carpeting. The carpet is thick with foam insulation, just vacuuming will not remove the water. The front is rather easy; remove the plastic around the bottom of the door opening - I just pulled-up. Then pull the carpet. I removed the two plastic bolt covers for the front seat bolts. I neatly cut the carpet behind the mounting area so I did not have to pull the seat. OK - so the car is backed on a hill. The front drains are clean and working. I disconnected the plastic hose from the rubber body fitting. I blew the hose with compressed air from the connection up, I also blew air out of the body connection. Next I used a hose fitting for my garden hose that makes a stead tight high pressure stream for cleaning say a drive way. I placed it in the plastic hose and had the water turned on, a very very little bit at a time. That water then flows into the gutter and forward to the front drains carrying the fine debris. I did the same for the body penetration. By the way, I had many many many large bath towels placed under and around the hoses. I was blessed that nothing became soaked other than the water coming back down the hoses that were just flushed and that was maybe a couple of cups. Anyway, I rinsed the front drains out again for good measure, put everything back together. My son used a zip tie to tighten the rubber around he plastic drain hose. So far so good.....

To find the back drains, I just started removing the plastic trim panels off beginning at the tailgate as I didn't know where how the rear drain hoses were routed.

I know its not an XC90 but maybe the above helps.