I purchased a 2003 V70 about a year ago. One of the price bargaining chips was the "Tailgate Unlatched" warning that was erroneously illuminated on the DIM. In addition, the cargo area dome light didn't turn on when the hatch was opened. (I had read that when there was a problem with the latch sensor that people would remove the dome light bulb as it would continue to burn after the hatch was closed.)

Shortly after purchasing the car, I removed the inner tailgate panel and latch assembly hoping to find an issue with the latch sensor micro switch - no luck - the switch functioned as designed. Also I couldn't see anything wrong with the wiring all the way from the latch to where the harness disappeared into the LH hinge cavity. I feared the problem must be further up stream so I ignored it until I would "have more time".

Well, as time went on the problems mounted - Locking the doors would blow a fuse in the aft fuse panel, not only disabling the rear door and hatch locks, but also the fuel cap door (Not real convenient when you have to get out of the car and replace a fuse at the gas station just to fill up!) Then the center brake light quit working. Now it was becoming a safety issue.

So this past weekend I tore into the inner trim panels so that I could chase the harness down inside of the "D" pillar. I found a disconnect inside the speaker grill. Unplugging that and snipping a tie wrap that was hidden up behind the trim panel allowed me pull the entire harness out through the hatch hinge cavity. The harness is housed in a flexible fabric conduit, which interestingly didn't show ANY signs of damage. But when squeezing the conduit up and down its length, I could feel something that didn't feel right with the wires inside. Pulling the conduit down, sort of like skinning a snake, exposed the severly damaged wires. The damage was occuuring about three inches inside the body, apparently being piched between the hinge arm and something else.

A session of splicing, soldering, and sealing with shrink tubing was next. When it came time to pull the conduit back up over the wires, it was a bit tight due the addition of (doubled) shrink tubing on some of the wires. A sprinkling of baby powder on the wires helped it slide on.

First, sorry to revive this old topic, but I have the same problem except all my wires have broken.
So how do I start, the big red and black are a dead give away, the rest on the other hand is giving me a headache!
Top

You get a kind soul here to point you to the wiring diagram for your car. You don't run the same color wires in a harness unless they are on the same circuit, but lets get the diagram here and sort it out.
Empty Nester
A Captain in a Sea of Estrogen
1999-V70-T5M56 2005-V70-M56 1999-S70 VW T4 BMW
Link to Maintenance record thread
Link To Volvo Glossary
Top

Go to this page http://www.volvowiringdiagrams.com/?dir ... 20Diagrams and download the diagram for your car, sadly Volvo did indeed use some same coloured wires in the tailgate harness which can make it "fun" sorting it out if they have all snapped. 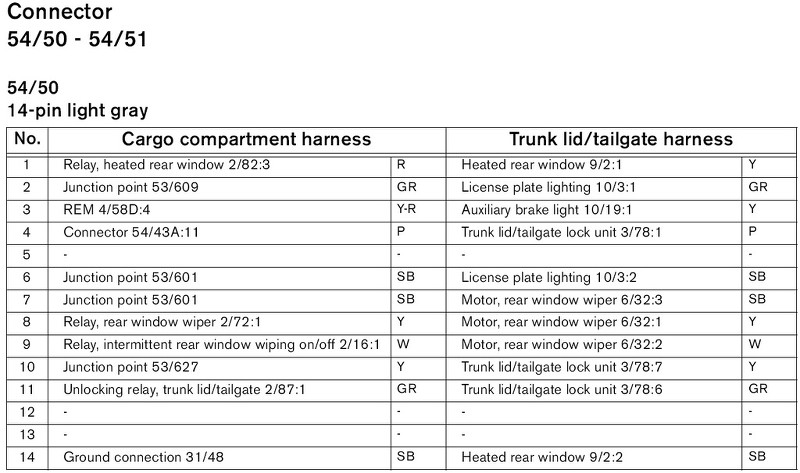 The pin ID is on the left the color of the tailgate harness wires is on the far right, note this information is from a 2002 wiring diagram, if your car is a different year it may contain other colors etc - Mike
Top

Thanks a lot, I will try to experiment with my 3 yellow wires this weekend

The one that got the "great" idea to put same colored wires in a harness should have all wires in his car made yellow, and then have them cut!
Top

I think the failure point on these cars is where the zip tie holds the loom to the car inside the D pillar. All of the motion of the loom is concentrated at that point so that it bends on a short radius these...recipe for fatigue failure. Not only do the wires break, they all break, start shorting together and then you get the rear wipers coming on with lights and other demons

To get those three yellow wires right

3 with ohmmeter, test each yellow wire down stream ( below break) for continuity with is component downstream and label

5 with voltmeter, look for 12vdc on each yellow wire when the component identified on the diagram is powered up and label.

6 I would solder in a loop on each wire to relieve bending moment...about a 1 cm loop will do.

Found this the other day on my 2004 V70. Completely corrected the problem after I repaired all the wires. Thanks for the posts!!
Top

Have the same problem. Does the harness disconnect in the roof above the linner? Or does it go down the left piling and plug into fuse panel next to rear left quarter panel?
Top
Post Reply