Turbos and Exhaust
Last week (Tune a HPT or LPT. Wait, a LPT?) we briefly discussed some of the basic differences between the Volvo LPT and HPT engines as well as some common upgrade paths. Thanks to some FF subscribers we had a request to dive in a bit deeper as it pertains to exhaust, turbo selection, and how it all relates to performance and drivability. So let’s dive in! 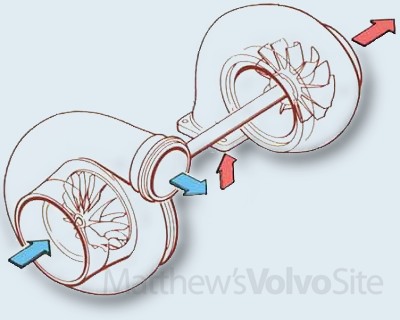 For most Volvo turbocharged models the Mitsubishi TD04 family of turbochargers are used however there are some exceptions, for instance the R models from 2004-2007 and the S60T5 past 2005, but for now let’s focus on the more frequently used TD04 family of turbos. These turbos are commonly referred to by their numeral designation and as you might suspect the larger the number the larger the turbo in terms of the horsepower it can develop. These turbos are known as the 13G, 14T, 15G, 16T, 18T ,19T. One interesting fact to note is that while the compressor side of the turbo gets larger (in terms of flow) the turbine side of the turbo stays the same. The turbine housings do change some from conical flange, to straight flange, to angle flange but the overall flow on the turbine side is most limited by the turbine wheel which is the same throughout the TD04 family.

Back pressure is most undesirable as it slows the ability of the exhaust gasses exiting the combustion chamber to push past the turbine wheel and create boost pressure.

It’s not uncommon at all for folks to upgrade their downpipe to achieve greater flow while leaving the remainder of the exhaust in stock form to keep tailpipe volume more reasonable. Stock resonators and mufflers do impede flow at higher horsepower levels but not nearly as much as the catalytic convertor in the stock downpipe . This is in part due to the exhaust gasses cooling considerably by the time they reach the resonator and muffler such that the gasses are more dense, take up less space, and therefore create less back pressure as they exit the tailpipe. 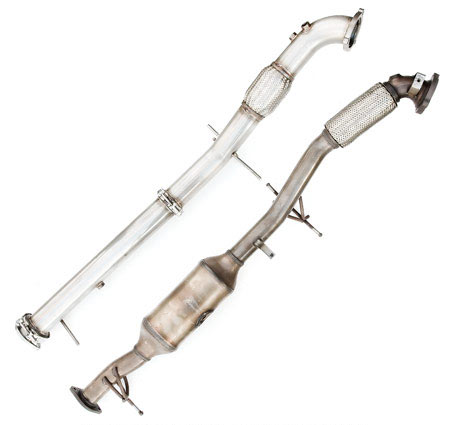 All in Moderation
I mentioned last week a fellow enthusiast that I work with who has a LPT engine with a larger 19T turbo installed to it. And while at first blush this might sound like quite a bit of fun there is risk to the engine with this large of a turbo installed. The risk comes from too much boost too soon in the RPM range . The amount of force imparted to the rods is only part of the issue, the other side is heat transient and ring expansion. We'll cover that in a moment, but first let’s understand why the larger turbos in the TD04 family can be prone to boost spike or rapid early RPM boost development.

The 19T turbo uses the same size exhaust turbine as the considerably smaller 13T, however the 19T compressor side is quite large and can consequently support considerably more power. This ‘imbalance’ in flow from the compressor side to the turbine side creates an imbalanced inertia. Inertia is not quite the proper term for this but it gives us a simple way to view how and why this imbalance creates boost jumpiness.

Larger Turbos Take Longer to Spool
Let’s consider what the turbo is experiencing from the turbine wheel to the compressor wheel as this example scenario is played out. As the engine revs, exhaust gasses are pushed out the exhaust port on the cylinder head and begin to exert force against the turbine wheel. With the smaller 13T turbo the amount of force necessary to start to develop the first pound of boost (boost threshold) is achieved earlier in the RPM band. However the 19T’s larger compressor wheel requires more force and flow to develop that same first pound of boost pressure so higher exhaust backpressure between the exhaust valve and the turbine wheel develops. As the exhaust pressure rises it reaches a point where the compressor ‘inertia’ is overcome and the turbo starts to spool very quickly. This quick spooling is then propagated even more as the compressor side feeds more pressure to the combustion chamber which results in more pressure out of the exhaust port after combustion, the cycle becomes self-energizing over just a few seconds and can in certain circumstances over boost the engine.

Heat Transient: The Upward Spiral
This over boosting is most troublesome not only from the force it puts on the connecting rods early in the RPM range but also from the heat transient (heat created over time) that occurs in the combustion chamber. This overly quick spooling creates rapid increases in compressor outlet temperature which the intercooler can’t adequately cool over such a short period of time. This added temperature is then transferred into the combustion chamber and the resultant heat is imparted to the piston and rings. If this occurs long enough and fast enough the piston rings can overheat and expand such that they bind in the combustion chamber (Ring pinch) . This puts added strain on the rods as the crankshaft tries to force the piston up the bore for the exhaust stroke.

Fueling is Cooling
To combat the quick rise in temps that can occur in these situations we frequently add fuel to the mix, this is why in higher boost It’s desirable to be richer than at part throttle or cruise. In the tuning world we call this “Lambda Protection”. Another method to help combat ring pinch is to increase the ring end gap. This is most conveniently done while in the process of rebuilding an engine so for those who may be in the midst of such a project, you might want to consider that as a way to help keep your rods safe!


[list][*]Questions, comments, arguments and freakouts accepted and encouraged. Really. Lucky WANTS to answer your questions.
[*]If you want to remain anonymous, email me your question or comment and I will post it as "Anonymous User".
[*]It takes Lucky and me several hours combined to bring you Fast Fridays. Your questions and comments validate FF's value.
[*]I write paragraph headlines, and sometimes article headlines. Yell at me if you find these not to your taste.
[*]Same thing with italics and bolds , they're all mine.
[*]Science + cars, whoo![/list]
Matt
Help keep MVS on the web -> click sponsors' links here on MVS when you buy from them.
Also -> Amazon link. Click that when you go to buy something on Amazon and MVS gets a kickback.

Sorry for taking so long to think this one over.

I found it counterintuitive that an overly large compressor would result in an overly early boost development, at first, until I realized that inertia was indeed exactly the right term. The wheels themselves aren't all *that* dissimilar by mass, but they're (loosely) mechanically coupled to the air flowing within an enclosed pipe - comparable to an electrical inductor, actually resisting changes in the rate of flow through it. The larger the wheel, the more aggressive each vane's coupling to the air flowing through it, the more the turbine resists spin-up, actually becoming a partial block on the exhaust flow. Since spent combustion gases are still coming out of those cylinders, this causes a rapid rise in pressure on the face of the turbine, exerting much higher forces on it than normal, and there's the energy for that rapid early spool-up. The turbo will stay at that abnormally high speed until all the excess exhaust gases are past the turbine.

It seems to me that would best be compensated with an electronically coordinated recirculating bypass valve (CBV on a solenoid) that would make the turbine "see" a lighter load during spool-up, thus preventing the abnormal rise in pre-turbo exhaust pressure in the first place. Far as I know, the vacuum connection to the CBV just serves to disable the SAS valve in positive manifold pressure conditions, and the CBV itself only responds to throttle-lift overpressure.

Unfortunately, I don't think our ECUs can be made to do that, short of a complete aftermarket DIY ECU swap. The best we can manage is to have our CBV's and/or BOV's set properly to keep the magnitude of the spike within safe limits - or don't put such a big turbo into it.

What I'm taking away from this is that, to keep the LPT off-the-line behavior the way it is, I'd have to raise the turbine torque and compressor inertia by the same proportion. Since turbine torque is proportional to the pressure drop across the turbine vanes, and we can discount displacement and compression changes as out-of-scope, that leaves only exhaust back pressure as a thing we can vary. There's probably a way to derive a calculator that can suggest the "right" turbo for a given exhaust profile.

This is reaffirming my gut feeling that putting a 3" turbo-back with S60R manifold and angle turbine flange onto my B5254T would mean bumping it up to the 15G turbine, though I really wish I could run some numbers to be sure that's the right one. With the stock turbo on the upgraded exhaust, it seems like the normal quick spool-up (as distinct from the rapid chain reaction above) would still create the rod bending risk, and possibly the heat transient as well.

Lucky, some questions back to you:

0) Have I successfully absorbed, rephrased, and regurgitated, what you were trying to teach us?

1) Do you think an actively controlled, automatic bypass valve is possible without being designed into the ECU from the beginning? Could it perhaps key on vacuum state, or on the RPM signal, and then control the CBV just like the TCV controls the waste gate?

2) Given a 97 B5254T with stock intake except the silicone hoses, the S60R manifold, angle flange turbine housing, OBX or similar turbo-back exhaust, and 15G turbo, which ARD tune would you recommend? Do you think 15G is the right size, and is that by gut or do you have some numbers somewhere?

Fast Friday: you pay for the whole seat, but you only use the edge!
Help keep MVS on the web -> click sponsors' links here on MVS when you buy from them.
Also -> Amazon link. Click that when you go to buy something on Amazon and MVS gets a kickback.