FF#23! Boost Be Gone! Do Volvos have Blow Off Valves?

FF#23! Boost Be Gone! Do Volvos have Blow Off Valves?

Boost Be Gone!
Wait. What?
That's right, this week's Fast Friday is all about how we get rid of boost!

Why Must I Have a CBV or BOV or DV?
This week by popular vote we'll be covering the Compressor Bypass Valve (CBV), Blow Off Valve (BOV) and Diverter Valve (DV) function and differences. While all three do the same thing, there is enough difference and confusion to take some time and clarify each unit and where/when they are used.

To understand the operation of these devices it's important to first understand why they are needed. To do that we need to imagine a driving scenario that will create a situation that is undesirable such that action must be taken. After all, turbo cars didn't always have these components installed and to this day some still do not. Let's also remember that the turbocharger makes boost pressure by using spent exhaust gasses that are still burning and expanding to push past the turbine wheel on the hot side of the turbocharger. Consequently the compressor wheel on the cold side of the turbocharger will start to spin since it is mechanically connected to the turbine wheel, and that subsequent spinning will in turn develop air flow under pressure that is fed to the engine. Additionally recall that the turbine and compressor wheels can easily and commonly spin upwards of 100,000 RPM.

Now with that said, consider the following driving scenario. You're driving hard throttle up a hill and developing a good amount of boost. The turbo is spinning along quite well and your engine is developing some good power! Suddenly you crest the hill and note a curve up ahead that requires you to lift off the throttle sharply and apply the brake in anticipation of the upcoming corner... Now let's go back one step. 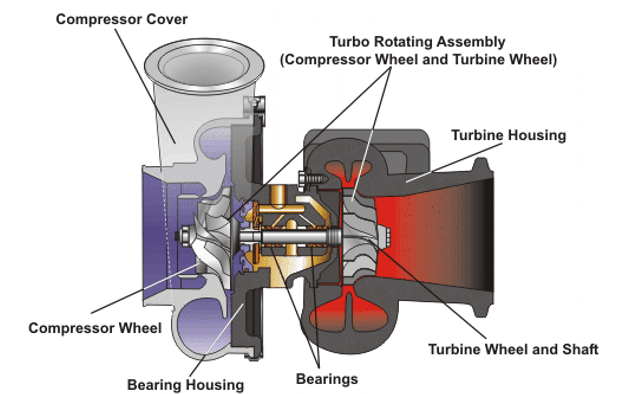 Just before we closed the throttle the turbo was spinning at high rpm, the engine was using the added boost pressure to develop power, and suddenly the throttle is closed. The turbo has no brake so there's no way to suddenly decelerate the compressor and turbine wheel. So even though the throttle is closed, the air flow from the turbo is still coming at full steam. With the throttle closed the boost pressure developed by the turbo is not being consumed by the engine. The pressure starts to build rapidly as the intake tract fills up with over pressurized air that has no place to go. This condition is known as 'turbo stack' and if it's bad enough it can back pressure the compressor wheel pushing it laterally against the internal bearing that support it. With enough pressure this bearing can be compromised and damage can occur that would dramatically shorten the turbocharger life span.

Back Pressure Kills Bearings... Dead
You might not think that this back pressure from turbo stack would be significant enough to cause damage but for most OE turbochargers the bearings are known as journal bearings and float in a film of pressurized oil vs. a conventional ball bearing like what we might be familiar with from a wheel bearing or similar. So if the back pressure is considerable enough it can actually push the compressor wheel hard enough and compromise this film of oil which would allow the bearing to touch the turbo housing. Since the bearing is also spinning at high rpm you can imagine how quickly the bronze bearing could be worn away by grinding on the cast iron housing. So how do we fix this? The obvious answer of course is to vent the pressure off before it can back stack and potentially harm the turbo. CBV's, BOV's, and Diverter valves do exactly that.

What is a Compressor Bypass Valve (CBV)?
The CBV is integrated into the turbo compressor cover on most Volvo models. As you can see in the diagram immediately below this paragraph, it allows the outlet pressure of the turbo to vent back into the intake of the turbo which keeps the air within the system and prevents a potentially rich condition. Since the ECU measured this incoming air and expects it to still be in the intake track it will add a proper amount of fuel to match it. As a side effect this venting of air back into the turbocharger also helps keep the compressor wheel at a higher RPM so that if you are quick to get back on the throttle (for instance when between shifts on a manual trans) it is quick to rebuild boost pressure as the throttle is re-applied. 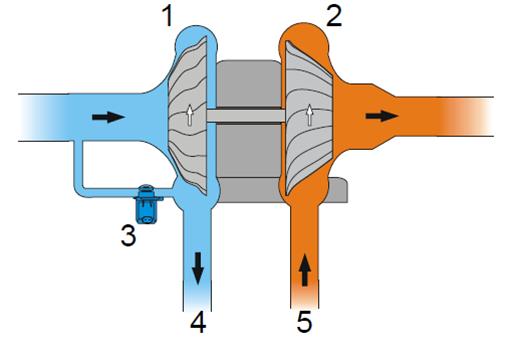 BOV: As Effective As Any CBV
Blow off valves do effectively the same thing but instead of recirculating the air they dump the pressure to atmosphere and the air is essentially lost. This can cause a momentary rich condition in cars that are not properly tuned for a blow off valve as the ECU is expecting this air to stay in the intake track and it is instead dumped off. With proper tuning a BOV can be as effective as any CBV. 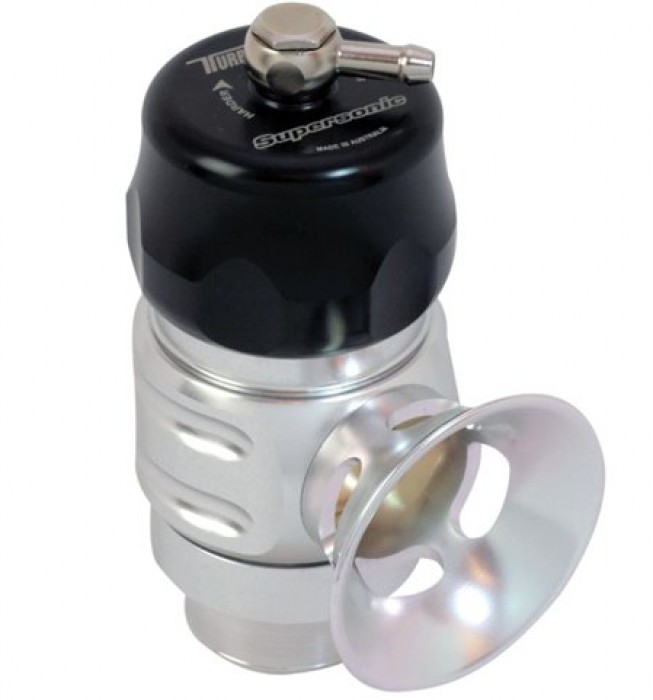 What is a Diverter Valve (DV)?
The diverter valve acts exactly as the CBV however it is generally not integrated into the compressor cover, for instance the twin turbo S80 models have a diverter valve instead of a CBV and it uses hoses to connect it to the turbo outlet and inlet. 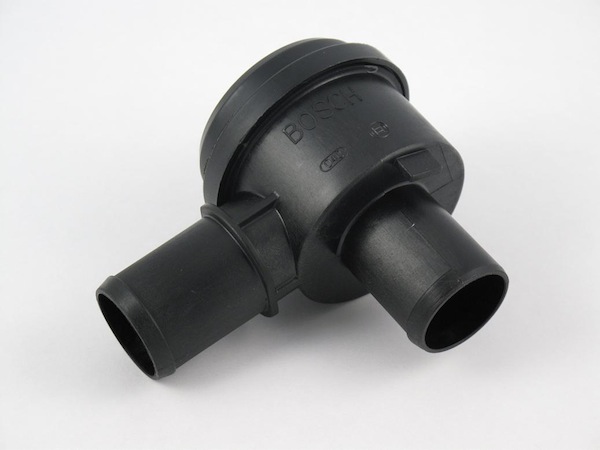 Diaphragm, Meet Spring. Spring, Meet Diaphragm.
Now we'll go a bit deeper on why there are upgraded CBV's, BOV's, and Diverter valves out there and why you might need one. We're going a bit further into the operation of these parts at this point so strap on your thinking caps!

For the rest of this topic we'll treat the CBV, BOV, and DV as operating effectively the same, while there are some slight differences between them, it's not significant enough to worry about for the scope of this article. From here on out we'll simple refer to them as the Bypass Valve or BV.

Now consider that when in boost and the throttle is open, both sides of the diaphragm are exposed to pressure, so why is the spring necessary? The answer is intercooler efficiency. If intercooler efficiency was 100% and there was no pressure drop then ultimately we wouldn't really need a spring on the BV at all or at least we'd only need a tiny one. As turbo boost rises, pressure would increase equally on both sides of the diaphragm and it would stay closed until the throttle was shut and intake manifold vacuum created pressure differential that would allow the boost pressure on the other side of the diaphragm to push past it and vent. But intercoolers aren't 100% efficient and there is pressure drop across them. In some cases pressure coming out of the turbo can be up to 7psi higher than pressure in the intake manifold when we're in higher levels of boost. Of course this is generally lessoned with aftermarket high efficiency intercoolers, but with stock intercoolers it can get pretty bad. Since the stock CBV spring is only rated at 7lb/inch it can be desirable to change out the stock spring with something a bit stronger. However if we select too strong a spring it will take too much differential in pressure to lift the diaphragm and some back pressure can occur before the BV vents, so proper selection is key.

Spring? Si! ...On Your BV
Since the intercooler will always have some restriction to air flow through it, boost pressure increase at the turbo will occur before the pressure increase in the intake manifold making the need for the spring against the BV even more useful.

The TD04 family of turbochargers used on Volvo models have an approximate 0.8 square inch opening for venting in the compressor cover. That means that the stock 7lb spring will open at about 8.75 psi pressure differential. So you can start to see how intercooler inefficiency coupled with intake manifold boost development latency can allow the CBV to vent when we don't want it to. This is where a stronger than factory spring can be useful.

If that's not enough info for you, post up any further questions in the comments!


[list][*]Questions, comments, arguments and freakouts accepted and encouraged. Really. Lucky WANTS to answer your questions.
[*]If you want to remain anonymous, email me your question or comment and I will post it as "Anonymous User".
[*]It takes Lucky and me several hours combined to bring you Fast Fridays. Your questions and comments validate FF's value.
[*]I write paragraph headlines, and sometimes article headlines. Yell at me if you find these not to your taste.
[*]Same thing with italics and bolds , they're all mine.
[*]Cams and turbos and MBCs and chips and... whoo![/list]
Matt
Help keep MVS on the web -> click sponsors' links here on MVS when you buy from them.
Also -> Amazon link. Click that when you go to buy something on Amazon and MVS gets a kickback.