Autotragic to Manual Magic!
The process of a manual transmission swap in early Volvo models up to 1999 is a pretty straightforward conversation ; Acquire the manual transmission swap parts, install them, and finally install a manual transmission ECU. That’s basically it. Starting in 1999, inter-module communication and ECU’s that were specific to each car, prevented the easy swapping of ECU’s back and forth as we knew it from years past. However with necessity being the mother of invention it wasn’t long until some tuners figured out how to do this in later model cars. This week’s article will focus on what it takes in the various years between 1999- and present models if you’re looking to swap out your slush box for a bolt action transmission! 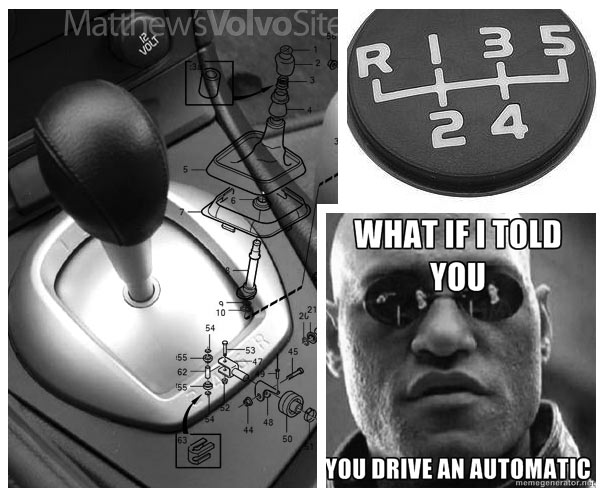 The first chassis to receive the ME7 engine management system was known as the P80 chassis and refers to S70, V70 models from 1999-2000, as well as the C70 from 1999 to 2004 for that particular model. For these cars the manual swap is actually not too far off from earlier cars. Aside from the obvious need for the proper hard parts (i.e. manual trans, clutch, master/slave cylinder, etc…) you simply need to have your ECU converted to manual trans by a tuner who knows how to do it (ARDtuning.com can help you here

There is a bit more re-wiring required in these models so let’s address that one item at a time.
{ Missed last week's Fast Friday? It's about how we get rid of unwanted boost. }

P2 conversion 1999-2004
For P2 models from 1999-2004 including the S80, S60, V70, and XC90 the process is very similar and includes everything discussed for P80 models but has a few differences as noted below.
P2 conversion 2005-
For 2005+ models the conversion starts to get sticky as multiple systems need to be recoded to work correctly. Without proper coding systems like DSTC, 4C active chassis, as well as others may start to show limited functionality as information from the transmission module is suddenly missing. If your tuner is local to you then system recoding is likely not an issue however for non-local folks complete system retuning will be a challenge. Consult your tuner for more info. If some limited functionality doesn’t bother you then conversion for these cars is effectively the same as earlier P2 cars.

P1 conversion 2004.5-
P1 manual swaps for models like the C30, V50, S40, C70 start to get even trickier mostly due to the Lin bus network using primarily serial communication rather than switched inputs to designate gear selection like park, neutral, or drive. This isn’t to say that P1 manual swaps can’t be done but it takes considerable work to do it cleanly. My advice to most folks is to simply grab the wiring and modules from the high speed network from a proper manual car and install to your model. Then recode the ECU for manual trans file and it doesn’t get much cleaner than that. P1 models suffer all the same issues with reverse lights, etc.. but can be easily overcome with a network swap from a donor car. So for those interested be sure to consult a proficient install shop and tuner as it’s quite a bit more complicated than previously discussed models. We’ll be finishing our first P1 manual swap later this spring so look for an update at that time!

P3 chassis 2007-
P3 is a larger untouched market currently and while time will certainly change that, the work to do a manual conversion has been slow. We’ve only seen two of them done so far and with less than spectacular results. Time will tell for sure how much work will be required but look for an update this summer as we partner with our friends in Canada on one of the first one’s we’ll be working on!

A Little Homework
ARD strongly suggests taking the time to review the schematic on your car before under taking such a large project. Volvo schematics are quite in depth and fairly straight forward to understand. With that said the information provided here is to help guide you along the way, some changes between models is to be expected so be sure to consult with your tuner before starting so you don’t have too many surprises along the way! For those who would like more info or perhaps an article on interpreting Volvo schematics post up in the comments.

Here are (some of the) topics in the MVS Volvo forums that are related to auto->manual swaps:

Auto->Manual Transmission Swap Information
Help keep MVS on the web -> click sponsors' links here on MVS when you buy from them.
Also -> Amazon link. Click that when you go to buy something on Amazon and MVS gets a kickback.

I have severeal questions. Sadly, i have a 2001 v70xc. Don't get me wrong, i love my car to death but i recently ran my codes because i was having transmission problems. I had a code that said incorrect 3rd gear ratio and was told that this is a death code for this transmission. Is that true? if so i would love to do a manula swap. But what manual transmission will be compatible with a 2.4L enigne? I've been told that i can pull transmissions out of other wagons up to 2004? is that true? Thanks ahead of time for the help.
Top

That can mean impending trans failure but it can also be caused by worn out valve body or valve solenoids so proper diagnosis by someone who's proficient in that trans would be advisable.

As for manual trans, if you keep it AWD then you'd have to source either the M58 or the M66. If you ditch the AWD and just go FWD then the M56 would be suitable.

It's quite a lot of work but it's also fun to do a project like that and know you're one of the few with a proper manual AWD car!
ARDtuning.com - Follow us on Facebook
Top

Awesome, thank you!! i would prefer to keep the awd but make it a manual. Any ideas on where i can find a M58 or a M66 tranny? im thinking thats out of a s60? I know i have to swap harness', tcm's, obvioulsy put in a clutch. Thanks for your help!
Top

M58 will likely only be found in North America in Canada but M66 can be pulled from any 6 speed manual here stateside. Car-part.com might be your best bet!

Yes should be compatible from that model

Thanks for your help ARD!! Always helpin me out!
Top