Editor’s note: the following text and photo comes from Volvo’s 850 History page. It was translated from Swedish to English by Google Translate service. Remember, this data refers to Swedish market 850s, thus it shows things like production ending in model year 1996. 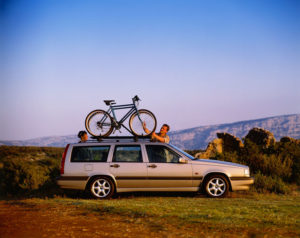 Less than two years after the introduction of the 850 GLT in the four-door sedan came five-door wagon in February 1993. Design of the 850 sedan showed off a rear part with typical Volvo Profile, ie. an almost vertical tailgate – a handy feature that maximizes space. Volvo 850 GLT received a tumultuous welcome – rarely has a new car received so many awards that 850th Combi version received the prestigious Japan Prize “1994 Good Design Grand Prize.” Over the years, expanded 850-series with more than just a hatchback version. The series includes a wide choice of engines, including turbocharged gasoline engines and direct injection. When Volvo decided to return to motor sport in 1994 it was done in the British Championship BTCC, British Touring Car Championships. The first Volvo that the challenge was a conspicuous Volvo 850 wagon – family car and race car in one. Volvo 850 was also the first car in the world with side airbags, which was introduced in series production in autumn 1994. A spectacular addition to 850/V70-serien was the first-generation four-wheel drive models: AWD (All Wheel Drive) and XC (Cross Country). Model Year 1997, the 850 hatchback of V70.

the orinal fuel lines in the 94 850 5 cylinder also the same lines used for the diesel motor????tks roger

Its always a good thing to know the history of
your vehicle. No such thing as too much information here.

My right side drivers door is clicking. Can I fix it myself or is it a dealer item?

My right side (drivers) door is clicking big time. Can I DIY with parts from Volvo or is it a dealer fix?