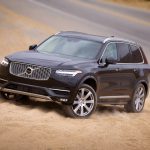 A close look at Volvo’s hugely important new SUV See the second generation XC90 Forum here. The new Volvo XC90 — second-generation of Volvo’s flagship — was introduced to much fanfare for the 2015 model year. The first 1,927 vehicles sold were available only by special digital order, and were individually numbered and specially badged […]