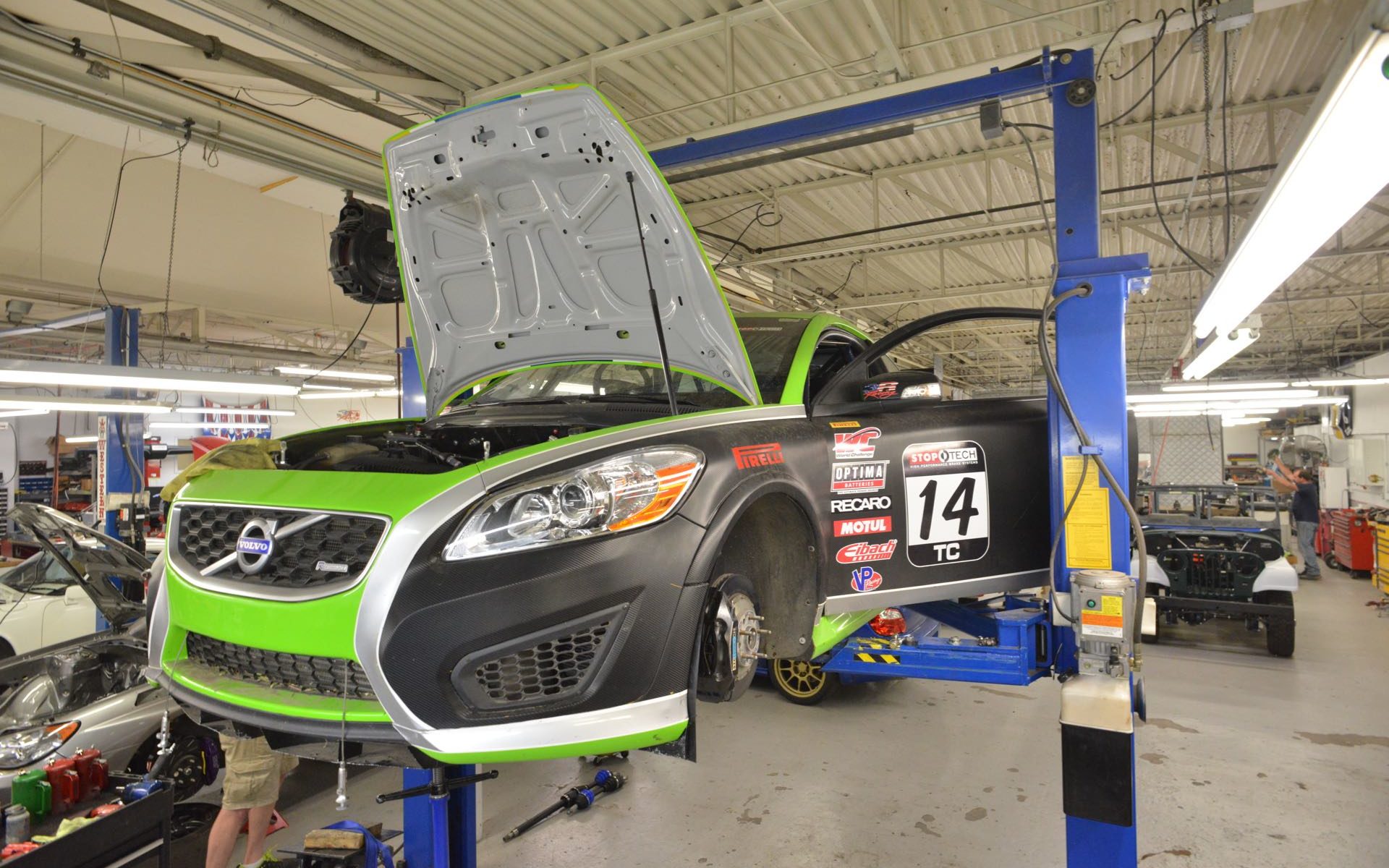 Dax Raub stands among the two dozen or so cars in his shop, pointing out an outrageous race Subaru STi over here, and an outrageous late-model custom street Camaro over there. Above it all, literally, is a  racing Volvo C30 on a lift, outrageous in a somehow quieter way, despite its past fame as a rarity in North America: an actual Volvo-supplied, Volvo-supported race car.

Maybe it’s the pedestrian paint scheme, or that it’s difficult to gauge its capability from down low that makes it seem less aggressive than the other cars. Whatever the case, I’m here for this car.

Raub is the likable and serious owner and Chief Operating Officer of 3R Racing, a performance tuning and race shop in Englewood, Colorado. 3R was responsible for building the C30 and S60 cars and supporting race teams in the late 2000s and early 2010s.

When California-based K-Pax Racing moved from Porsche to Volvo in 2009, 3R Racing got the call to build and support K-Pax’s two Volvo S60s. Volvo racing was alive in North America.

Two years later, K-Pax decided to add the C30 to the already-established S60 team. The C30 in Raub’s shop is one of the two 2011 C30 Volvos built for the Touring Car class by 3R for K-Pax Racing during a mad, 60-day dash to get them prepped and tuned to run in the Pirelli World Challenge and in the US Touring Car Championship — USTCC — also known by its tagline,  “professional touring car racing made affordable”.

Volvo North America supplied 3R and K-Pax with the 2 new C30s only 60 days before the first race of the 2011 season.

“It was a last minute decision to race them but we took on the challenge. Four months, if not more, would have been a more realistic timeline,” Raub explains with a matter-of-fact tone I find noble.

The 300-hp, 3000-lbs-with-driver C30s 3R built had gutted interiors and heavily reworked engines and running gear. The only interior bit not pulled out was the dash.They ran in North American events in the 2011-2012, and 2015 seasons. In the 2015 season Stacey Racing resurrected and campaigned the cars in Pirelli World Challenge and local SCCA events. Stacey Racing hired one of the 3R guys to fly in and engineer for them that year.

The C30 cars put their power to the front wheels via a stock manual transmission and were supported by Volvo far more than the S60 cars were because they were much closer to stock than the S60s were, and thus were well within Volvo’s ability to tune.

Of considerable interest to this author was that the C30s would start and run only if the key was in the ignition (!) — like any modern Volvo — because the engine management’s security feature was left untouched (key needed). Volvo required this of 3R because Volvo didn’t want its custom tuning work getting out into the wild.

While nothing is impossible to a determined hacker, the stock engine management security meant the custom AFR maps and other secrets employed by the Volvo tuning ninjas enjoyed the standard Volvo security protections while living on the ECM of the two racing C30 cars. It also meant the software tools Volvo gave to 3R were locked to the cars through the VINs.

The C30 cars’ headlights, taillights and turn signals are functional.

3R Racing supported the K-Pax S60 team for seven years, and during the concurrent S60/C30 seasons, would field a team of over a dozen drivers and  techs, two semi tractor-trailers and a large support van. Many members including Raub got their Class C license so they could drive the semis.

The 600-hp S60 Grand Touring (GT) class race cars, in contrast to the C30s, were pure race machines that shared nothing with a stock S60 of the era besides the engine block and exterior shape, a characteristic NASCAR “stock” cars are known for.

According to Raub, the Volvo 2.4 inline-5 cylinder met its limit at around 600hp. At that point the head gasket would give up. (For the record, he prefers Audi’s inline-5 because he’s gotten those over the 600hp mark with fewer problems.)

Volvo created the carbon fiber shell to match the production car’s shape on their own dime, first in 2009 for its debut season, and a year later when that model crossed from the 2010 P2 to the 2011 P3 body style. Raub and a handful of 3R techs were flown to Gothenburg on Volvo’s dime to help shape the S60’s carbon fiber body in Volvo’s wind tunnel, an experience he said he enjoyed quite a bit.

At the end of 2013, new management within Volvo decided to pull out of supporting independent-team motorsports, and that was that for factory support for indie Volvo racing efforts in North America.

Not enough Volvo racing in your life? Check out our History of Polestar Racing story and our BTCC 850 Wagon story.