This topic has 43 comments in the Volvo forum.

jreed » I’m in the process of trying to figure out why the ECC climate control system on my ’97 855 GLT (158k miles) is unhappy and blinking its AC and REC lights at start up. As best I can tell the system functions as intended: AC is cool, fan blows normally, temperature tracking seems ok, position knobs for upper and lower vents direct the air properly, the recirculation switch makes the damper move into recirculate mode, etc. I’m just going through the system checking out components to try and find one or more that isn’t working right

Part of the process was to check that the two duct temperature sensors and two interior cabin sensors are working. Maybe somebody else already discovered this method, but I hadn’t come across a write-up anywhere, so it was new to me: I found a way to do the resistance test on all four sensors relatively easily (no removal of sensors or disassembly of lower part of dash is required for this test — though like me you may already have removed the panels and glovebox, etc, to check everything else out). All you have to do is to pull out the ECC control module from the dash, disconnect the three green connectors on the back. (Removing the radio first makes it easy to push on the back of the ECC module to release it from the panel). 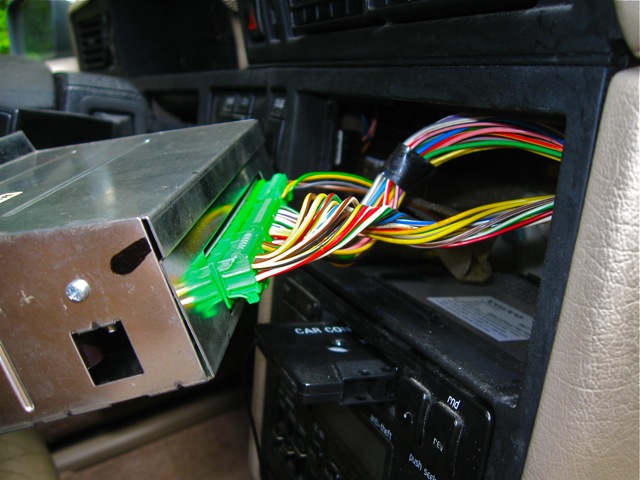 Remove the three green connectors on the back of the ECC module.

Above I’m measuring the Green “#2” connection (my #1 and #2 labeling numbers are arbitrary — I don’t know if green is driver’s or passenger’s side) and getting about 7.7kOhms resistance, which is close to the 8-12kOhms range described in the helpful “850 -95 AC Heater System Manual” pdf file. I figure I was reading 7.7kOhms because it was pretty hot outside when I was doing this test (~85-90F) and the pdf mentions that the resistance declines with increasing temperature.

Below I’m measuring the opposite side of the car (the Brown-Yellow pair) and getting 7.56kOhms.

Next I’m measuring the duct temperature sensors. The wires for these sensors are on the small green ECC connector that only has four wires going to it.

The fifth sensor in the AC system is at the bottom front of the car mounted to a metal tab right in front of the radiator (on my ’97 — I think ’95 and earlier have a different type of sensor that is located near the windshield on the passenger side). When I tested that sensor I got about 500 Ohms, which matched the reading of the second temperature sensor located just above it in front of the radiator.