Supercharging your Volvo: Nitrous oxide systems have been a part of the performance scene for many years now, but thanks (or no thanks) to the Fast & Furious franchise this staple of hot rod performance and power has been glorified to mythical status and as such has become the subject of some misunderstanding and ill-conceived information. So for this week’s article let’s delve into the realm of N2O and supercharging your Volvo!

Let’s Cut to the Oxygen 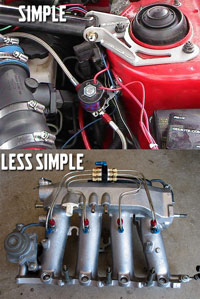 To begin we should have a good understanding of the main component in question, oxygen. Oxygen in the atmosphere only makes up about 23% (measured by mass) of the total components of the air we breathe but is effectively the only component within the atmospheric air mix that does an engine any good. Oxygen provides the necessary oxidizer for fuel to combust and burn. Without it a fire would go out, such as with the use of a fire extinguisher where the effect is flooding the area to remove oxygen and put out the fire. The same is done with welding gas on MIG and TIG welders to flood the area of the weld and prevent oxygen from oxidizing the molten hot bead. An oxidizer can be simply defined as any chemical necessary for a combustible to burn or chemically react.

Beyond Turbo- and Supercharging… There Exists Nitrous

Viewers may be interested to know what the newest generation of cars have an alternative power boosting alternative- electric supercharging. In fact, this technology has already been employed in the 2019 mercedes. The electric motor rotates a compressor that provides a rapid burst of RPM torque; This extra push in power helps avoid the turbo lag.