Removing the oil pan for o-ring replacement is a messy affair, but very necessary if you are experiencing low oil pressure due to old and degraded o-rings. I was quoted $500 for the job from both my Volvo dealer and an indie shop. I’m VERY glad I saved the money doing the Oil Pan/Sump O-Ring Replacement  myself, however I can definitely understand why someone would want to pay someone else to do this.

1. Put the car on ramps. Jack stands are NOT advisable here. Place plenty of rags/blankets under the car. Oil will be dripping throughout the entire procedure, and trying to have a catch-pan for every bit of it is not ideal. Here is a picture of my workstation!

3. Remove the oil dipstick tube. Simply undo the 12mm bolt on the intake manifold and pull the thing straight out. 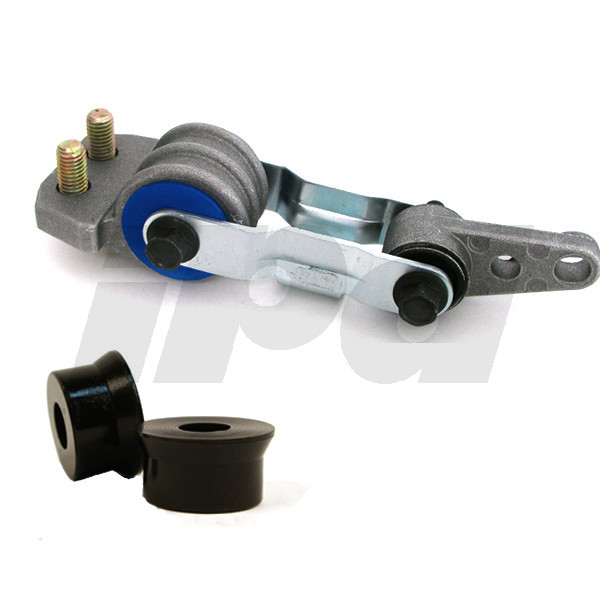 Credit to IPD USA for this picture.

Here is a picture that sums up steps 1-5: 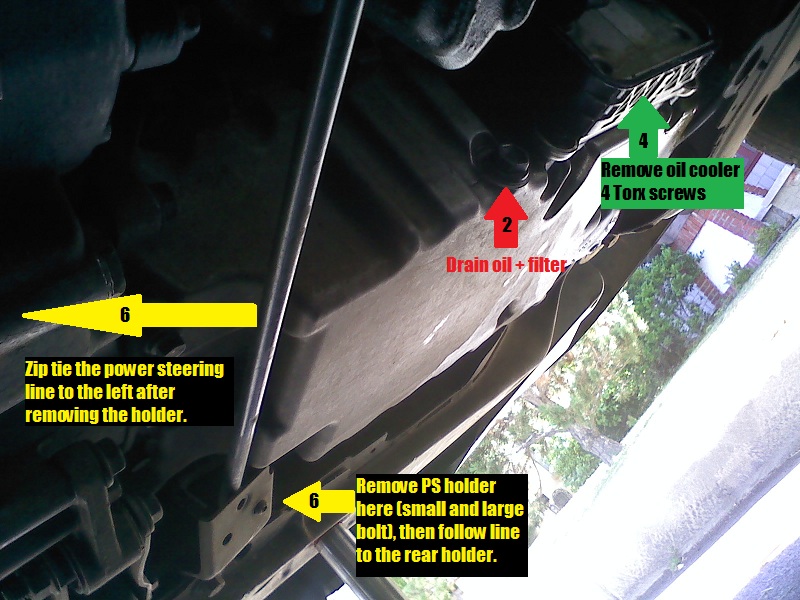 7. Now here’s one of the harder parts. In order to get the pan out easily, we need to jack up the engine a bit. Look on the passenger’s side of the oil pan, and near it and close to a part of the serpentine belt, you’ll find an engine mount. Looks like this:

There are two bolts, 17mm IIRC that hold that mount in place. Figure out the best way to get to them, they aren’t too hard, but they are on very well. I got to one by undoing to small nuts holding the plastic shroud inside the passenger’s side wheel well. Then using, duct tape to secure it out of the way, it gave pretty good access. Once you’ve removed both bolts, now we need to raise the engine a bit.

8. Get a jack of some sort, I used a small 2 ton hand jack. A floor jack was kinda too big and bulky to use here, I liked my extra space. Position the jack right under the oil pan and jack it up with a piece of wood between the jack and the pan. This is important so that you do not damage the pan. You want to jack it up enough that the engine mount (you’ll be able to see it) starts to detach from the sub-frame.

9. Find something to wedge between the engine mount and the sub-frame. I used a small pry-bar very effectively, although others have reported success using wood or other strong objects.

10. Now for the fun part! Start undoing all the oil pan bolts. NOTE: WEAR EYE PROTECTION. I wore some painting goggles and I’m glad I did. As soon as the pan is loose, oil will start dribbling everywhere, probably right where your face is looking up at.

I never bothered to count all the screws, but there are a lot. There are four (4) on the transmission side of the pan that are much longer. There are also 3 or so medium sized ones around the oil filter. In addition to all that, there are two, larger bolts that attach sideways, as if to thread into the transmissions. Just remember where they go and don’t lose them!

I removed all but a few of the bolts. Now in some write-ups you’ll see people talking about using a rubber mallet to knock the pan down. I even bought a cheapo mallet to use, but to my surprise, when I undid a few last bolts, the thing fell down an inch and did not need any tapping. Now remove all the bolts. Do not try to remove the pan just yet.

11. When I got to this point I tried to wrestle the pan out for literally 3 or 4 hours, getting increasingly frustrated at why it did not come off. I found that I needed to jack the engine up a little more so that the part that was getting stuck would have clearance to drop out.

Essentially I had to jack up the engine through the engine mount. I placed my jack in a way where I could reach the bottom of the mount, and then I jacked it up another half inch or so. Here is what it looked like: 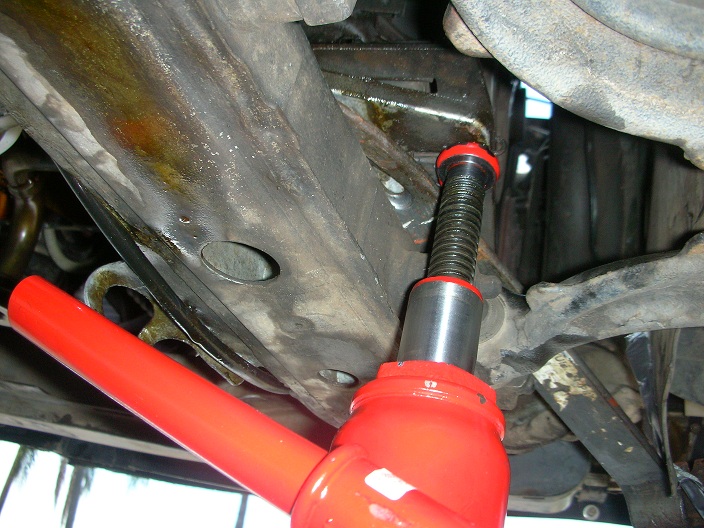 After this, the pan will almost drop easily. It can still get caught on the oil pickup tube, but you’ll figure out how to angle it right.

12. Woohoo! Okay, take a breather. This is a good arm exercise!

13. Okay so you’re probably tired of being under the car at this point! Good, because now you’ve got some cleaning to do. Depending on your choice of oil, your oil change interval, and driving style, your pan may be in great or bad shape as far as crud that’s accumulated.

I let mine soak in a tube of Simple Green for 10 minutes while I attacked it with a scrub sponge. This is the result:

I later used a razor along with some Chemtool B12 to remove some of the old baked on gasket and varnish.

14. Now onto the reason for opening up this whole mess! The o-rings throughout various parts of the pan and block are subject to extreme amounts of heat and pressure, leading to bad things like this:

There are a total of 7 o-rings to replace in the following locations:

O-Ring LocationsIt is normal that your replacements may seem different, just use the ones that best match the size/width. The old ones may be flatter and will certainly be harder, even broken in extreme cases.

This is a picture of my old ones, some of which fell apart as I took them out:

So change all of those out! Even if an old one “seems” or “looks” OK, CHANGE IT! You don’t want to do this job a second time because you were lazy.

To get the o-rings that are on top of the engine block to stay put, I dabbed the back side in a little Vaseline and that worked like a charm for many hours until I finally got the pan back on.

15. Now that the o-ring mission is complete, it’s time to put the patient back together! Make sure to use only the approved Volvo OEM liquid gasket for the reseal. No RTV Silicone junk! 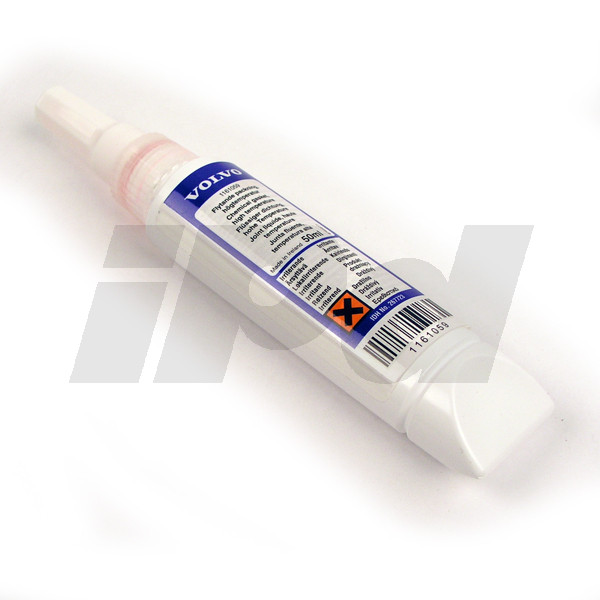 Credit to IPD USA for this photo.

Before re-attaching the pan, practice it a few times! This will ensure that you are able to get it on when it really counts. While practicing, try not to let the mating surface touch anything, and don’t allow any oil (that will still be dripping from inside the engine) to come into contact with the surface. This is especially important when you do it “for real”.

16. Once you’re sure of your ability to put the pan back on, get ready to apply the new sealant. I put a nice line of the pink stuff all around the mating surface, then smoothed it out with my 2″ foam roller. You want a nice even coat all over. Make sure to get a good amount on the passenger’s side of the pan where it’s a lot thinner; less room for error there!

Once that’s on, no need to panic. This stuff doesn’t dry immediately, so take care and take your time to then mount the pan back into position. I found it really helpful here to have another person hold and press the pan against the block while I went ahead and attached a bunch of screws.

Attach a few of them at least, then snug them down, not too hard. Then put in all of them and tighten not terribly hard; 17Nm if the factory spec I believe. 48Nm for the sideways bolts.

17. Woohoo! It’s back on! The gasket forms when it is deprived of oxygen and is ready to go in just a few minutes. Of course it’ll take you a little longer than that to get everything together, but you get the idea!

19. Once everything is back together, fill it up with oil and screw on your new filter. My 2000 XC normally takes 6 quarts, but with the oil cooler drained as well as seeping oil from all over, it took an additional quart.

20. If you did everything right, you should fire up the engine and all will be well. The engine will probably be “knocking” for a few seconds as it replenishes oil in all the places you drained. This is normal, but if it persists for more than 5 seconds, shutoff the engine and investigate. In my case, my engine was dead silent when I turned it on! A very welcome sound (or lack thereof)!

If you have any questions, feel free to PM or email me. Many other forum members with considerable knowledge are here to help as well. Good luck on your endeavors!

Thanks a million for taking the time to put together these amazingly thorough instructions – the very best that I have found.